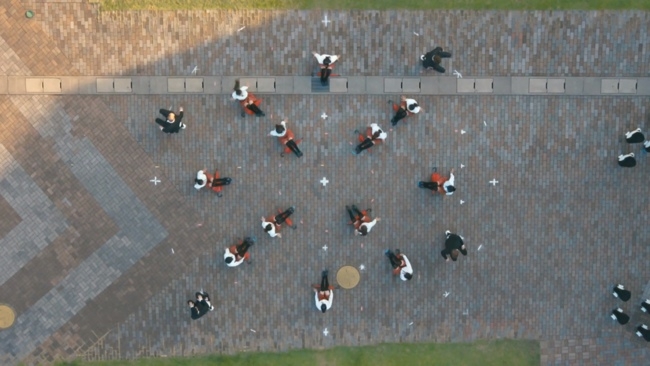 In this precision-made music video, aerial drones play a crucial part. But even understanding how these work, there's some mind-blowing co-ordination and precision in this clip

This is a very enjoyable video, even if you don't like the genre of music it's promoting. It's great to watch, and you're left wondering several things.

The first is: how on earth do those Honda Unicycles work? I've looked closely and I can't figure it out. I know I want one, but I also suspect that I'd fall off. This is what Wikipedia says about it:

but I'm not sure I'm any clearer about how it works after reading it - nor how you actually control the device, although it does seem a bit like a polydirectional Segway.

The other thing you wonder about is how on earth the makers of this film managed to choreograph the whole, single shoot so precisely. And how did everyone get their timings with those umbrellas just right? One mistake and the whole thing would have to be scrapped, one assumes.

The video, by US Alt-rock group OK GO took around 50 takes to get it perfect, acording to Billboard magazine.

Apparently parts of the video were filmed at half speed and then speeded up (which meant also playing the music at half time) so that the more delicate manoeuvrings would have a better chance of working.

Anyway, this is the best drone music video we've seen so far.

Thanks to PetaPixel for drawing our attention to this.