The ultimate in motion capture film making - a Virtual Camera 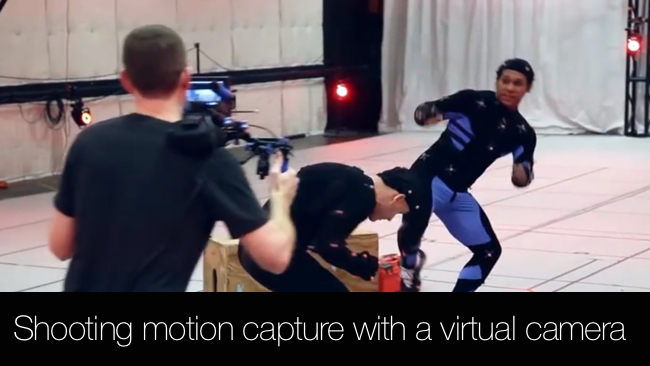 Imagine a world where there are no cameras and there are no actors. Well, actually there are actors, but they wear motion capture suits. You know the sort of thing: athletic, toned individuals wearing slightly silly-looking costumes festooned with white balls. The whole point of the exercise being that their slightly exaggerated movements can be accurately recorded and then applied to fully-detailed 3D models, which will then move according to the original actors’ motions.

And there are indeed no cameras. Which is a problem if you’re a director that’s used to using them. Because at least they give you some idea of what the scene will look like from your chosen viewpoint.

Not having this facility is a big disadvantage. You can probably learn to do without it (which is what directors of films using motion capture have had to do up to now) but to stay “in the moment”, surely it would be better to use something that looks and behaves like a camera in the first place?

Well now you can. You can move around the set, with a device that looks a bit like a camera, and which has a viewing screen that behaves a bit like a camera’s viewfinder. Except that the image you’ll see is not one of the ball-actors in their odd-looking costumes, but the “finished” scene, complete with rendered characters and backgrounds.

It’s not perfect yet. What you see in the viewfinder is pretty low resolution. If you want to see what a scene will look like, you can “pause” the action and it will render quickly to full resolution.

Only a year or two ago, to achieve this, you’d have needed racks of computers. Now, you just need one, and some powerful Nvidia graphics cards.

Have a look at the trailer for the film itself, followed by the Behind The Scenes video, which explains it all.

This is fascinating stuff, and has the potential to revolutionise the way we make films.

Here are some production notes from the video:

CONSTRUCT is a Sci-Fi short film advancing the art of filmmaking, VFX and virtual production.

This teaser was presented as part of a tech demo at Nvidia's GTC conference March 25, 2014. This is a work in progress intended to illustrate recent advancements in graphics hardware and software capabilities.

CONSTRUCT in its entirety is coming soon...