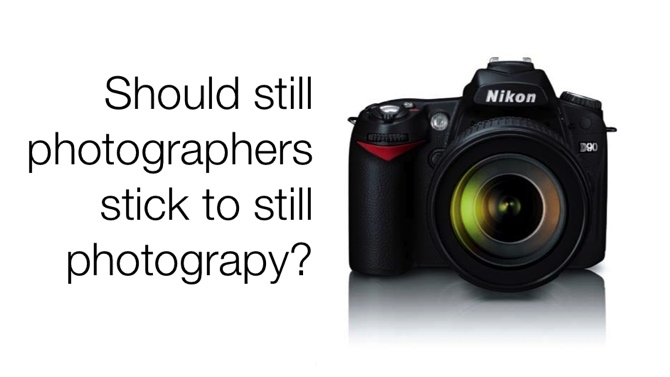 Should still photographers stick to what they know best? This contraversial viewfrom Photographer Nick Rains

Consumer video has been around for decades - I was shooting crude VHS video back in the early Eighties - but the results were average, to say the least, and editing was a huge chore.We were all happy to play with it and leave the higher quality stuff to the broadcast crews. And of course the really good stuff at the cinema was shot on film. DV tape cameras upped the ante at the end of the 90s and into 2000 and the advent of reasonably priced NLEs made everything much more accessible.

Early digital compacts did away with viewfinders, showing a live view on the rear LCD screen, effectively a video feed, so it was not long before small digital video clips were appearing on the Internet – quick and convenient, but certainly no competition for the very expensive pro grade digital broadcast quality gear shooting in HD.

Then, in 2008, along comes the Nikon D90 with a 720p video capture capability – almost 'full' HD – but the large sensor with its limited DOF and cinematic 'look' took the video world by surprise. For a mere few thousand dollars you could use your existing Nikon lenses and produce broadcast quality results...well, at least in theory.

We are now in a place where almost all stills photographers have access to video since very few current DSLRs do not have some sort of full HD capture mode - even the sub $1000 Canons can now shoot video to almost the same level of quality as the game-changing Canon 5D Mark 2. A huge indy film making industry has sprung up almost overnight because now anyone can create a documentary or short film with a single DSLR and a Mac to a much higher level of production values than ever before.

Should you do video?

The big question now is this: just because you can, does it mean you should?
I recently read an opinion piece by a media studies academic in the USA who took the position that newspapers would be much better off not requiring their photographers to shoot short clips at events. This was for three very good reasons:

1. Very few people, less than 10%, were actually looking at the new clips because, whilst you can 'take in' a good news photo at a glance, a video clip requires a 'commitment' of 30-60 seconds and does not really add much to the mix. All that effort for nothing!

2. It takes time for the photographer to shoot, at the potential expense of the stills.

3. The results are frequently rubbish – often with poor sound followed by crude, rushed editing that can give the clips an amateurish feel which could adversely affect the paper's brand image.

All of this highlights the uncertainty surrounding mixed-media publication. Everyone wants to produce "rich" content because apparently that's in huge demand, and phones and tablets cater to this demand by providing a platform for multimedia delivery. So there is a demand - that much is clear; but I would argue that anyone from the stills industry who it tempted to incorporate video into their business should be very wary. Try to resist the lure of bright shiny technology, and take a good hard look at the realities of video production.

Here are some facts to ponder:

Stills photographers are used to getting top quality results with less effort than ever before – cameras and printers have never been so easy to use. To get a similar professional level of 'quality' from the video medium is orders of magnitude harder, both in terms of technical skill but more importantly time commitment – and I'm just talking about the capture here, not post. Sound comprises at least 50% of the overall effect of a film or documentary
. Poor sound equals poor film, with almost no exceptions. Sound capture is a skill set all on its own and either needs to be thoroughly learned or outsourced to a sound specialist.

Editing is the crux of the whole enterprise – if you see a stills photographer who has done excellent work in the realm of video I'd lay good money that the results rely as much on top class editing as it does on good footage.

The extra effort in producing video

Stills photographers are visual artists and generally have little trouble capturing interesting footage that is technically correct and well composed. But do they know how to shoot 'coverage', picking up those little extra shots that give the editor wriggle room for timing, sequencing and band-aid cutaways?
Stills photographers produce great static images, that's their job, but transitioning to the moving image is a huge step because a good film or documentary is not made up of a sequence of beautifully composed stand-alone images: there is a story to be told.

We're still working on RedShark's comments system. Meanwhile, if you'd like to comment on this or any other article, please email me, david.shapton@redsharknews.com, and we'll publish the best ones we receive.