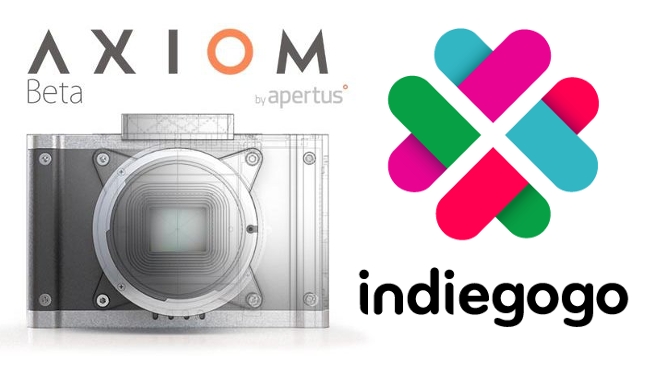 As something of an antitode to all these glitzy IBC camera launches, the long-awaited open source Axiom beta camera, which will be 4K capable down the line, is taking 'at cost' pre-orders  via donation deposit on popular crowdfunding site Indiegogo.

It's been a long road for Apertus, the team behind the Axiom 4K camera project. We first profiled the effort to build an open source 4K camera back in January, 2013. Since then, the industry has undergone a sea change to 4K acquisition at all budget levels, with a slew of 4K cameras released by more recognizable players in the camera business.

Where does that leave the Axiom, the would-be 4K camera with a modular design and open source, patent-less development philosophy? Well, it may surprise some, but the project is going full-steam ahead, proving it's not just vapor, but a real (beta) camera that produces eye-popping visuals. And the best part of it: right now, you can put down a deposit and eventually get the camera for just the price of parts, assembly and shipping.

Okay, maybe the kumbaya sentiment isn't enough for some of you. Well, the camera, even in this beta stage, boasts some pretty gaudy features and options, with more down the pike.

If that's not enough, here's a convenient graphic to whet your whistle: 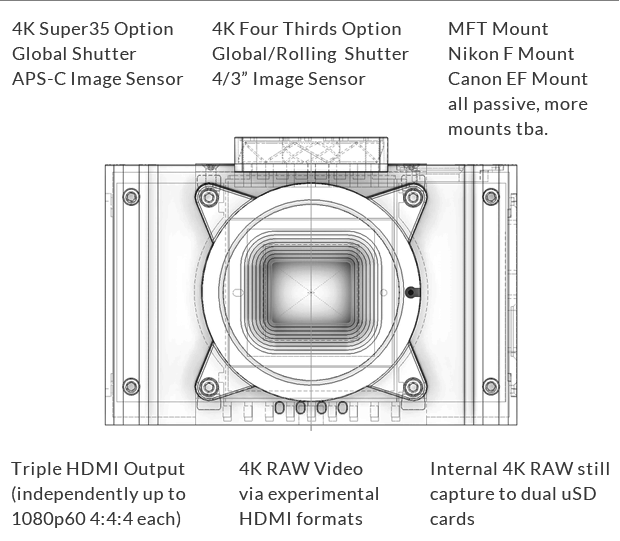 After a review of the specs, there are a few things to discuss. The first, and most critical matter, is that the Axiom beta won't be able to shoot 4K video right away. I firmly believe that it will in the future, as the Apertus development team has obviously been working hard to get the camera to this point, and I don't see that effort waning any time soon. But if you need 4K acquisition from the get-go, you should probably look elsewhere. This is unlikely to be a major sticking point, as anyone who is taking part in the Axiom beta program realizes that the camera won't be entirely production-ready at shipment. Eventually, the Axiom beta will record 4K via "experimental" HDMI formats, necessitating the need for a similarly capable external 4K HDMI recorder (once 4K out through HDMI is available for the Axiom beta).

There are currently two sensor options, the Truesense KAC12040 and the Cmosis CMV12000. Here's a comparison breakdown of the two sensors: 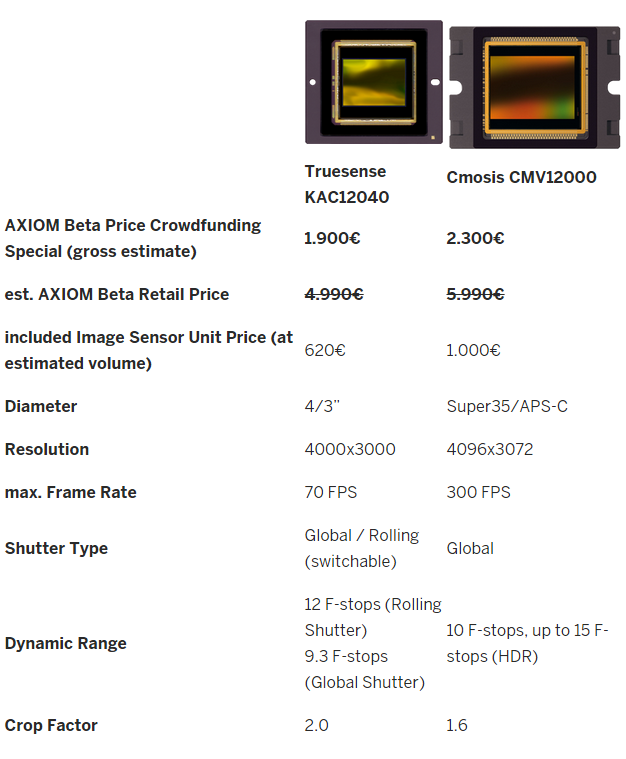 Giving people the option to choose sensors is a wonderful way to showcase the idea of open source hardware in practice. Users can tailor their cameras, starting at the sensor, but also brain, power, etc (on the eventual Axiom Alpha retail unit). The Axiom beta will not feature the complete modularity of the full release Axiom camera, but it will be semi-modular, meaning that some core hardware components will be upgrade-able. Of the two options, the Cmosis CMV12000 is the clear winner, but at a higher cost. Really, the Cmosis sensor is not that much more than the Truesense; I can only see the Truesense appealing to shooters that already have a ton of MFT glass. But, either way, the Axiom beta is a relatively inexpensive camera option, made even more-budget friendly with its innovative crowdfunding campaign.

The Axiom Beta's Indiegogo crowdfunding campaign is basically a call for deposits as a de facto pre-order for the upcoming camera. Of course, as is the case with most crowdfunding campaigns, there are all manner of donation levels, but it starts to get interesting at the €300 level, the lowest amount for pre-order. The early bird €300 level for the Cmosis super-35 sensor is already 'sold out', but you can pre-order that sensor option at €600 and still pay the same total amount - you just have less to pay at shipping.

I cannot reiterate this enough: the Axiom Beta Indiegogo campaign offers the opportunity to get this impressive development camera at cost, or for the price of parts, assembly, and shipping. It's an even better deal than typical "break even" pricing, as none of the past development costs will be factored into the Axiom Beta's crowdfunded pre-order price. This will be the only time that the Axiom Beta is offered at cost, so if you're interested, you have around 26 more days to place your pre-order.

Interestingly enough, the Axiom beta has elected for an Indiegogo 'Fixed Funding' campaign, as opposed to the 'Flexible Funding' option. For the unitiated, Indiegogo differentiated itself from Kickstarter with the flex funding option, which means that project starters get all funds, regardless of hitting the goal, minus Indiegogo's cut. Fixed funding on Indiegogo means the project must reach it's goal for funds to be released, but Indiegogo's cut is lower. There are a couple reasons why someone would choose a fixed funding campaign over a flex funding campaign: first, if a project literally cannot be completed to satisfaction without at least the funding goal, and second, if the project starters believe that what they have is so strong, that reaching the goal is very likely. The fact that Axiom beta is a fixed funding campaign communicates that the team knows precisly what funding is needed to achieve its larger goals, and that it has the utmost confidence in its project.