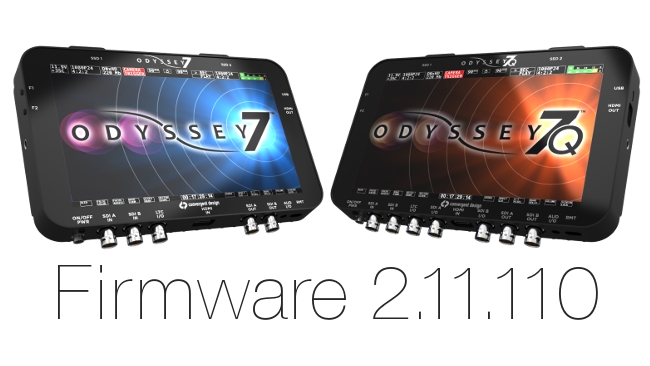 While many of us are patiently waiting for the Atomos Shogun 4K HDMI recorder, Convergent Design reminds us that they already have an SDI 4K and other recorders on the market, now made better with a recent firmware update.

I'm sure that many Sony A7s owners and Panasonic GH4 owners (at least the ones who didn't purchase the optional Panasonic DMW-YAGH Interface Unit) are excited about the upcoming Atomos Shogun, which, as of this writing, is still the only 4K HDMI recorder announced. If you're one of these people, your wait will continue at least a couple of months, as the Shogun is slated to arrive sometime in mid-October.

If your camera has SDI-out, however, you don't have to wait at all. Convergent Design's Odyssey 7Q will record your 4K footage right now. And due to a recent firmare upgrade (2.11.110) which affects the 7Q and its HD-only cousin, the Odyssey 7, your recording options just got better.

Here are some of the firmware update highlights for these popular combination recorder-monitors:

Check out the full press release from Convergent Design after the page break.

Highlights of the new firmware include:

Scrubbing through clips is now available both while the file is playing as well as when it is paused.

The cameras currently supported include the IO Industries Flare 2KSDI and the Indiecam indieGS2K. Supported RAW formats for these cameras are as follows.

Canon C500 High Speed RAW SupportCanon Cinema RAW “4K Half RAW” mode 4096x1080 is supported at 50p/60p and 100p/120p. The Odyssey7Q currently supports the original full frame height version of the Canon 4K half RAW, not the “4Kx1K” cropped mode. Only the highest frame rates in the Slow & Fast modes are currently supported.

FIXED Black dots in live image when overexposing or white-clipping

An Odyssey SSD or Odyssey Utility Drive is required to perform the update.