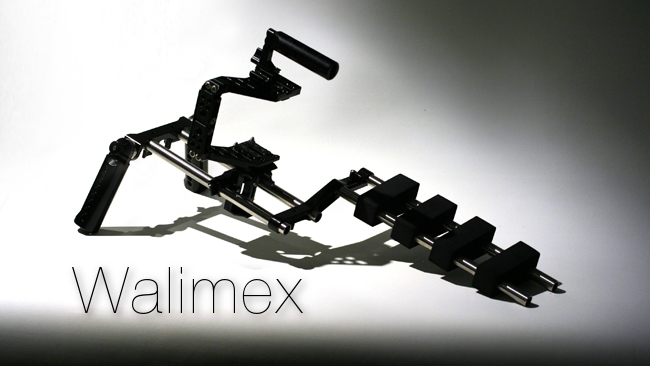 RedShark Technical Editor Phil Rhodes gets his hands on the latest DSLR rig from German accessories maker Walimex and shares his thoughts.

A sufficiently dedicated search of the internet will probably turn up my having made some fairly negative comments about DSLR rigs in the past. Often expensive, in the worst case they can end up turning a small, unobtrusive, low-cost and lightweight DSLR into something that's none of those things. There's a lot of very cheap stuff out there, too, mainly from Far-Eastern manufacturers whose after-sales support is, with the best will in the world, hampered by barriers of distance and language.

Into this maelstrom of options drops Walimex, based in Rain, Germany. The company makes and distributes a range of camera accessories which now includes its Aptaris DSLR support system. Distinguishing itself from the flamboyant colours and easy-shatter plastic parts of its competitors, Walimex has made its rig sensibly black, entirely of metal, and to standards of mechanical engineering that ensure the very first impression is a promising one of solidity and quality.

To perform a realistic appraisal of something like this, we must first digress into issues of philosophy and opinion, because after all, un-accessorised DSLRs have been used for decades. Most people would agree, however, that the two-handed grip of a commercial photographer is far from ideal in filmmaking. What's less obvious is the best alternative approach. I, for instance, have a background mainly in ENG cameras, making things like Canon's recently-announced CN 7x17 servo lens an attractive proposition. People more used to feature filmmaking might consider lens control outside the purview of the camera operator, however, and prefer dual grips below the lens. The ability of a DSLR support system to accommodate these desires with respect to our own expectations is what makes all the difference, and we should be clear: any conclusions we reach here should be viewed in the context of one's own circumstances.

The supplied review system comes in essentially three parts: the grips, the rod system, and the cage. Some assembly is required, but that's inevitable in a system designed to be configurable around a wide range of cameras and it makes more sense to supply un-assembled, both for efficient shipping and because most people would end up dismantling the thing to make changes anyway. The company thoughtfully provides suitable allen keys, and the only other required tool is a flat-bladed screwdriver. Most of the assembly steps, however, simply require rod mounts to be clamped onto rods, or handles to be clamped onto rosettes, and both are designed to be quickly field-adjustable and can be secured and loosened by hand. The grip adjustments are via nicely knurled thumbscrews, and the rod clamps use the conventional approach requiring perhaps half a turn on tabbed screws – which are metal, not plastic.

The rod system is fairly conventional. Finish on the stainless-steel rods is excellent, without an excessively specular surface which might provoke reflections, and with enough of a brushed-looking texture left from the grinding process to allow the clamps to grip securely. 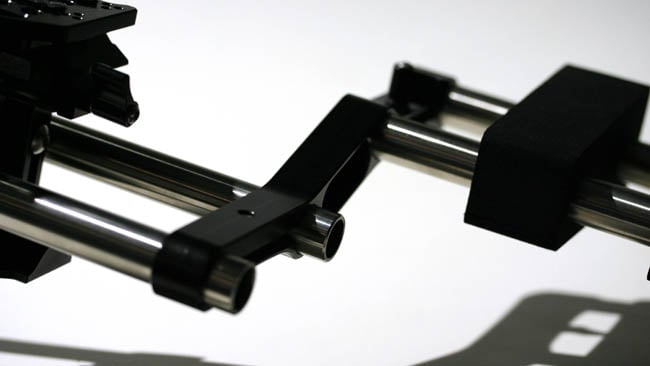 The ends are tidily finished with a slight external radius for easy insertion. The only provided shoulder padding is via four blocks of high-density foam which slide onto the rearmost pair of rods, which is, given the feather weight of a typical DSLR rig, surprisingly acceptable, although there is probably an opportunity to do something less basic here in the future. 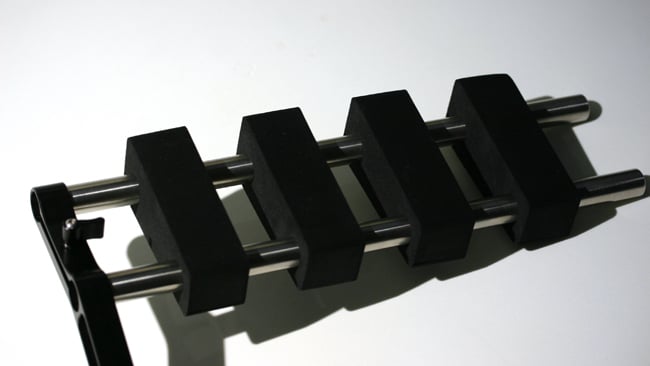 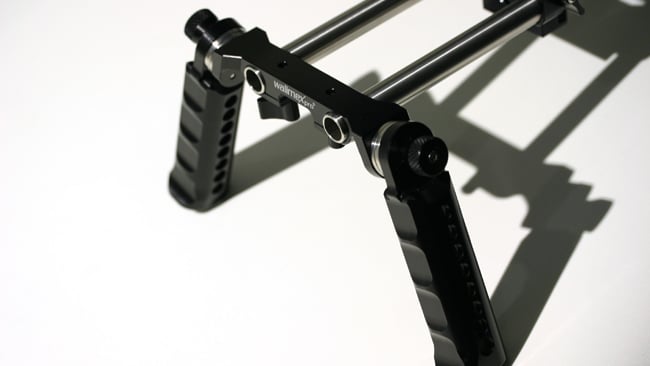 The two front handles clamp on straightforwardly. The rosettes (stainless steel, presumably) are each secured with four screws and mate with reassuring firmness against their opposite numbers on the grips themselves. 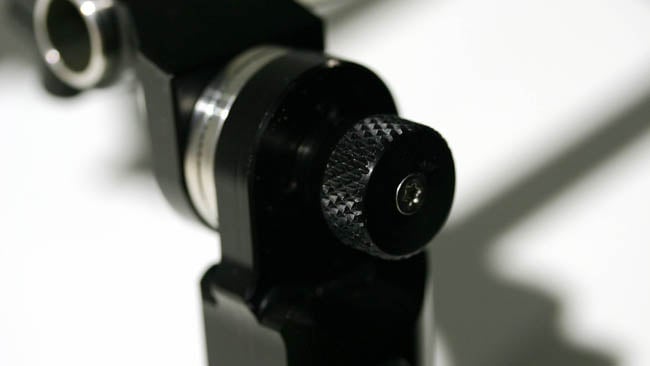 The angle of the grips is fixed by the shape of the rod mount, and will alter somewhat as they're adjusted depending on the length of the operator's arms and other factors. This seems to work quite well. The grips themselves are of heavily-ventilated metal, which may split opinion. 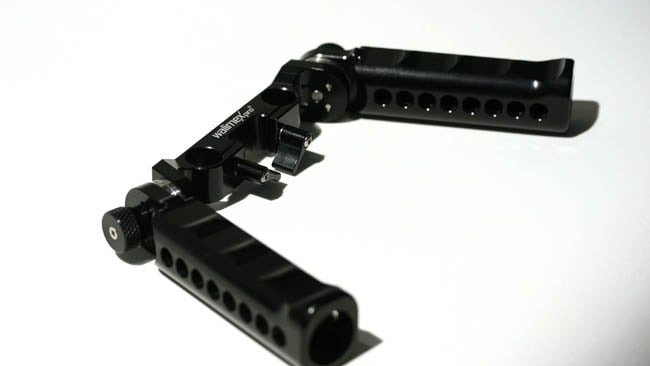 Some people like something with a bit of give and padding to it, others prefer metal for minimum slop. This does mean there isn't anything protecting the bottom end of the grips, however; putting it down on (for instance) a concrete surface would eventually stand to damage the coating. 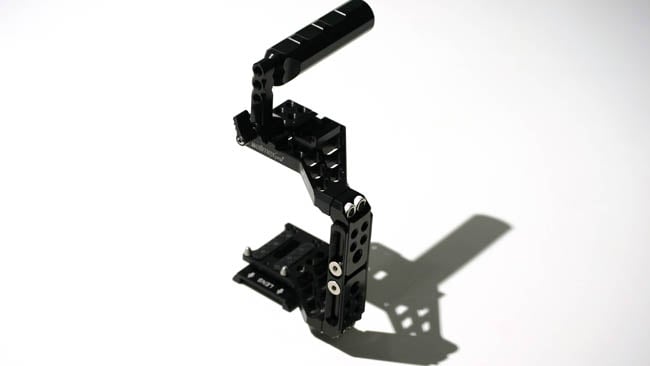 Perhaps the highlight of the collection is the cage. The upper surface is effectively a cheese plate, to which a dovetail suiting the quickly-removable top handle may be screwed.

The handle itself is perhaps a little lightweight – I'd have preferrred something more the size of the front grips – but should nonetheless be adequate for all but the largest hands and heaviest setups. 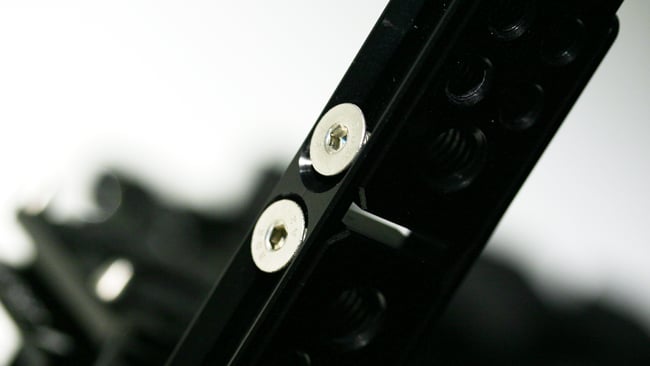 The cage itself is adjustable for height and provides for attachment both at the bottom, with a standard 1/4” screw and configurable anti-rotation pegs, and, perhaps uniquely, at the top. A cold-shoe plate allows the top of the camera to be clamped with quite some retaining force to the top of the cage. 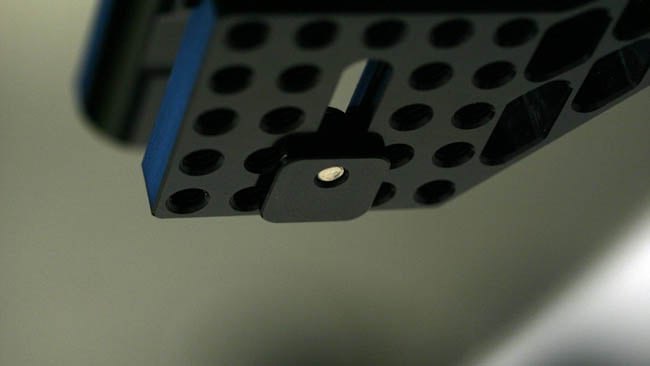 While I must query the suitability of a DSLR's shoe mount as a serious structural support, this does seem to help with dampening vibration, so thumbs up to that idea. For mounting accessories, a further cold shoe is supplied which can be screwed to the upper cheese plate. The only circumstances under which this whole setup wouldn't necessarily work that well is with something like Sony's A7S camera, which relies on the active connections in the Mi Shoe mount for its audio provision. This isn't a dealbreaker, however; simpy don't use the upper mount. The A7S is light enough not to need it anyway, and lens supports can help with stability too.

The presence of the cold shoe mounting point implies that the vertical size of the cage must be adjustable. This adjustability, while inevitably a less sturdy point of the design, is well-implemented, with a set of four countersunk screws behaving as a clamping wedge inside appropriately shaped slots. This exists on only one side; the cage is not a full wraparound, but it's made out of significant enough chunks of metal (three-eighths of an inch, at least) that flexibility and vibration are nonetheless minimised. The cage is rapidly demountable from the rod mounts, being attached via a custom dovetail, for more discreet moments. A particularly nice engineering detail is that the dovetail block in this case is retained and allowed to slide on two steel pillars, and spring-mounted to remain open, minimising fiddliness and inconvenience when remounting the camera. Perhaps the nicest refinement of all is a part that was unlabeled but which I take to be a cable clamp, mounting on the inside of the cage and providing a small adjustable grip to retain a notoriously-fragile HDMI or audio cable. While this can't reasonably be such a tidy and integrated device as the camera-specific connector protection blocks available from other people, it's a nice touch that should remain relevant for several body upgrades to come. One wonders if additional arms are available for it.

So, it's all very nicely done. Personally, I'm not a huge fan of the dual grips approach but this is, fair to say, not really Walimex's problem, but it'd be nice to see movement towards a grip system that allows users to shoulder a DSLR as if it were an ENG camera and have one hand free to focus, especially if suitable electronic lens controls could be arranged. In a similar vein, that balance issue isn't solvable without a battery on the back, though Walimex do make battery mounting plates. The only other missing link is any provision for mounting a viewfinder, although mostly they seem to be mounted on magic arms or short lengths of single mattebox rod and could be easily added to Walimex's large collection of configurable parts. 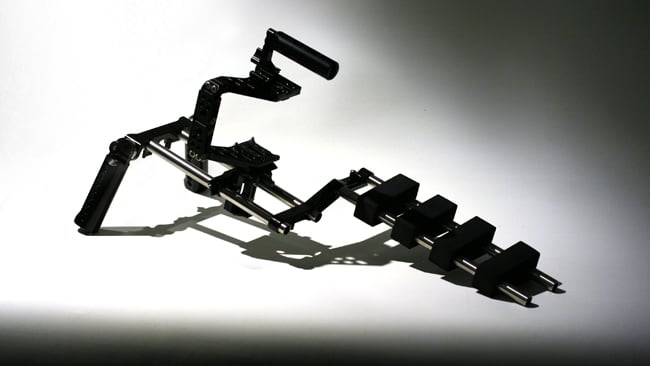 The cage, certainly, is excellent, and could profitably be used as part of almost any sort of video-stills-camera setup one wished to develop. The grips are nice, and the rods, are, well, rods. It's not cheap, but it is exceptionally well made.