Can the new PXW X70 camcorder from Sony replace DSLRs like the Canon 5D Mk III? 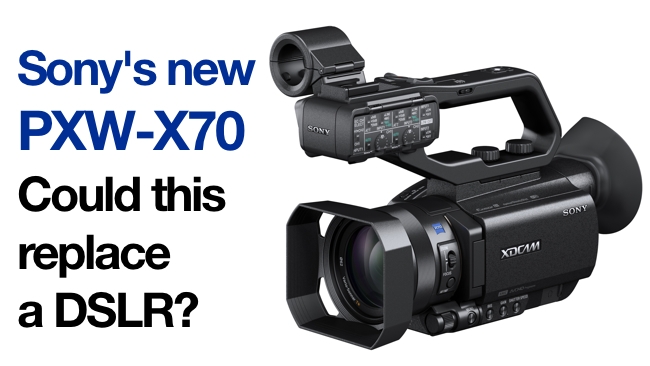 Can the X70 replace a DSLR?

We’re in a really odd place at the moment in the evolution of camcorders. Nothing seems straightforward any more

And if you wanted to take high definition video, you’d need to buy an HDW 750. It was around twelve to twenty times the price of the new Sony X70. And, nice though the HDW 750 was, the diminutive new camera is quite probably better. It’s certainly got a better sensor. It records 10 bit to a better codec, and it’s upgradable to 4K. All this in a handheld camera, including zoom lens, that’s under £2K. Astonishing.

Today, there really is so much choice. There may even be too much choice and the reason I say that is because I think some people make the wrong choice for the wrong reasons. Let’s be clear about this - there isn’t a bad camera out there today. But there might just be the wrong camera for the reason you bought it.

(I realise this is very presumptuous of me, and I wouldn’t claim to be the world’s biggest expert on this, but I do get exposed to a lot of cameras, and it’s rarely that I don’t think “would I buy one of those if I were doing X,Y or Z?”.)

I'm going through this dilemma internally. The trouble is that I like most cameras that I use. This is such a competitive market place that a poor camera wouldn't get out of the starting gate - never mind be successful - unless it's one of the overblown "Lifestyle" models that play on their perceived desirability, in a way that's not proportional to their technical abilities.

I really like the Canon DSLRs: I've used a 5K MKIII and a 1DC extensively in the last year. I'm blown away by the Blackmagic cameras which seem to represent extraordinary value. The Sony Alpha 7S is breaking down barriers, and yet the Sony F65, although over three years old, is still arguably the pinnacle of technology with its 8K sensor.

And then there's the Arri Alexa and Amira, with the sensor that seems to defy the perceived need for more and more resolution by simply looking great.

There's no shortage of choice

Whatever else you might think about today's video products, there's no shortage of choice.

But there is a shortage of a clear direction to take, because there are now so many options. This is not necessarily a bad thing - it really can't be bad that a camera that cost £65,000 nine years ago can be bettered by one that's a small fraction of the price (and the weight!). But so many boundaries are being blurred right now that there isn't much of a frame of reference to hang on to for support.

Here's a case in point: the new Sony X70, which was launched on Monday last week. It's a very small XDCAM with some big specifications. Its size would suggest that it's something you might take with you on holiday, but it's capabilities suggest you can make broadcast television programs with it. And then, on top of that, the nature of the sensor might even tempt you to make cinema films with it in preference to using a DSLR.

Let's just have a closer look at this latter point. We said a minute ago that in the early days of DSLRs, they were for still photography only. In fact, I remember being told by one manufacturer that "even though our sensors have the same resolution as HD video, you will never be able to shoot and record video on a camera like this because it's impossible to get all that data off the sensor quickly enough - and where would you store all that data anyway?". Remember that ten or eleven years ago, a single gigabyte of flash memory cost around three hundred pounds/five hundred dollars.

But now, as we all know, a lot of people buy DSLRs because of their video capabilities, and may never take a still picture during the entire life of the camera (although that number is still very small compared to the number of still photographers. Anyone who wants to pressure Canon into improving the video performance of their products should probably bear this in mind).

That's the problem. Things change so quickly, and so dramatically, that technology barriers are broken down, leaving a landscape of inter-mingling products that were simply unforeseeable in their capabilities and relationships to each other even a short time ago.

Today, you can literally make a live, high definition video broadcast, to anywhere in the world using a telephone. And it's free.

Let's look a bit more closely at the Sony X70 and why it's blurring boundaries.

For a start, it makes very good pictures. There are none of the usual "restrictions" that you might expect in handheld cameras. It's 10 bit. Colour sampling is 4:2:2. And the bitrate is up to 50 Mbit/s - more than enough for "broadcast quality". (We’ve only had our hands on it for a few minutes, but we did see its output on a large cinema screen and in HD, it looked impressive to us. This was ungraded footage: we are looking forward to material that has been properly post-produced but there’s never any harm in seeing footage that's straight out of the can).

Up to now, most of these small but very capable handheld cameras have come with 3-sensor configurations, where the sensors themselves are very small. Having three separate sensors has all kinds of advantages, but they're never going to give the kind of control over depth of field that cinematographers like to see. They tend to be very small, which also means that their low-light capabilities are going to be relatively meagre.

But the X70 has a much, much bigger sensor. Not as big as "full frame", but, nevertheless, a big 1” sensor with a very high resolution of 20 Megapixels. In recent cameras, Sony has started using the information in every pixel to create either an HD image or a 4K image, where the camera is capable. That's the case with the X70. There's no moire or aliasing caused by line-skipping or pixel binning. This is a big advantage over “traditional” DSLRs.

The pictures from the new camera are very sharp, and it comes with built-in (but removable) pro-audio facilities. As a package, compared to a DSLR, it's very complete. I think it could tempt some people away from DSLRs - especially when you consider that it is upgradable to 4K capture and recording.

Will it tempt people

But will it tempt people away?

As far as I can see, there is one main reason and some smaller ones that might mean that it won't.

The big thing is that the sensor is smaller than a "Full Frame". To me, this means that more of my shots will be in focus, but it might also mean that I have to take more steps (like using the built-in ND filters) to get a shallow depth of field. I'm quite serious about the focusing thing. With a full frame camera, in HD, it's really difficult to get a handheld shot that's in focus. With 4K, it's verging on this impossible - and it's not like any DSLR has built-in focus follow aids.

The output from the X70 may lack the filmic narrow depth of field that so many seem to clamour for, but the output should be very gradable. Video is recorded in ten bit, and the footage that I have seen from the camera is not at all noisy - in dark areas. With 1024 more levels available per colour channel, you'll be able to stretch the output from the X70 further than any device that records in 8 bit, and you'll be able to push it further into dark areas because of the low noise. And it’s intrinsically 4K - you just need the upgrade from Sony when it’s available to enable this.

So I'm going to stick my neck out and say that I think anyone that's not inexorably drawn into the culture of using DSLRs might consider this camera for their day-to-day professional work. It's got the picture quality, the resolution, the flexibility (no interchangeable lenses but a massive range of focal lengths from the built-in one) and a better form factor - with professional audio.

If you're prepared to make a choice, there is one for you to take.