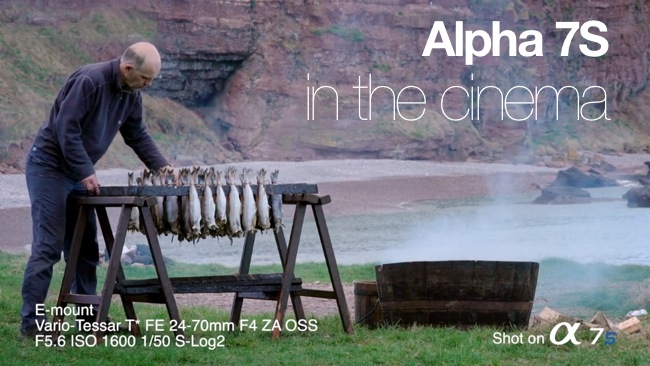 I spent the day yesterday at Pinewood Studios, a few miles west of London, and one of the most accomplished film-making studios in the world.

Just a few yards from the 007 building, where they have a permanent water-tank set for those massive aquatic centre-pieces that you almost always seem to get in James Bond films, stands a newly equipped preview theatre that we were privileged to have the use of for a day.

This was Sony’s biggest effort yet to promote the Alpha 7S, although even before the show started, it was clear that all the assembled journalists and well-known DSLR bloggers already thought it was an impressive and significant camera.

But I was about to see exactly how good it was, in a cinema that’s good enough for world-class directors to preview their latest work.

Den Lennie, of F-Stop Academy, had been commissioned by Sony to produce some short demo films with the new full-frame camera - and each was accompanied by a Behind The Scenes film as well. The first in HD and was about traditional fish smoking in Scotland’s. The second was in 4K and shot in Japan in the cherry blossom season.

I sat in the front row, and the first thing I noticed - from the Power Point slides that introduced the demonstration - was how sharp the projector was (although I can’t guarantee that this was the same projector used for the films - but it did provide is with a reference point).

The main point of the fish-smoking film was to show off the low-light performance. It did this very well indeed - and I noticed that ISO 12,500 was a kind of a sweet spot - as I first found here, in our first "hands-on" report on the Alpha 7S. At this extremely high ISO, images are luminous, glowing, and for most practical purposes, noise free.

So how did it look?

First the HD. Obviously, you can’t easily make scientifically accurate measurements from the front row of a cinema, but the images looked great, in all the right ways. Contrasty, detailed, saturated, and - apart from the shots that were practically in the dark - not at all noisy. We were reminded that with this camera, if you need to shoot in the near dark, you no longer need a night-vision camera.

The HD we saw from the A7S looked sharper than most “normal” cinema screens in high-street cinemas, in my opinion. Definitely “cinema quality”.

And then we saw the 4K footage.

The sharpest thing I have ever seen...

Quite simply, this was the sharpest-looking thing I have ever seen in a cinema. A note of caution here: this is completely subjective. I don’t have perfect eyesight, but it’s OK in the near distance, which is where the screen was. But I think the important point here is the comparison between the HD and the 4K.

As I said, the HD was sharp and perfectly acceptable on what was a medium to large cinema screen, from the front row. The 4K was noticeably sharper. Anyone who tells you that you can’t see the difference needs to sit through this demonstration. It was very obvious. And remember: the HD already looked sharp.

Shot on a mostly grey day in Japan, the detail was amazing. Quite obviously, they used a good lens to make this film, but I’m presuming the fact that the Alpha 7S doesn’t line-skip or pixel-bin but uses the information in every one of the sensor’s pixels to derive the final image contributed to the very high quality final result.

I am still taking in what all of this means for camera manufacturers: that you can have a camera this good, and this cheap. Of course, there are always going to be reasons why you'd need - if not necessarily want - to pay twenty times the price of an Alpha 7S if you were making a high-budget feature film, and, of course, lenses matter as well. But now, if you don't have the money, you do at least have an alternative - and an astonishingly good one.

Finally, I saw some low-light HD shots from the Alpha 7S side-by-side with a Canon 5D Mk III. There was an obvious difference in sharpness. The Canon was noticeably softer. This wasn’t a surprise at all: it just shows how technology has moved on and what’s possible at a given price point.

I learned a few more things about the Alpha 7S which I will bring you in later articles.

It’s quite clear to me and to Phil Rhodes, RedShark’s Technical Editor, who was there with me, that the Alpha 7S is a watershed product.  It’s going to change the buying habits of film makers for some time to come.

Video examples over the page