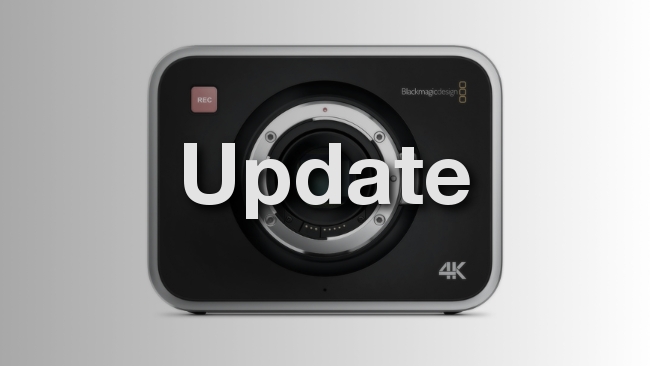 Blackmagic Design has been on a tear lately, delivering firmware updates for its cameras at rapid pace. The latest update is for Blackmagic Production Cameras only, yet offers long-awaited features that will eventually trickle down to the entire camera line-up.

It's a symptom of the fact that so many of the world's electronic devices have features that are essentially software-defined that the release of a firmware update for a camera is newsworthy – but there's no doubt this one is. Blackmagic have just released version 1.9 of the software for their Production Camera, the 4K member of the company's widely-used stable of acquisition equipment.

There are both updates and whole new features. The tweaks are embodied by changes to what Blackmagic is referring to as sensor calibration processing, which I suspect might mean it addresses both general noise-floor and possibly that small degree of fixed-pattern noise which is, if one was forced to find fault, one of the faults that people found. This behaviour was never unreasonable, given the resolution and global shuttering of the 4K camera's sensor, but anything which can improve things is nonetheless extremely welcome. The degree of improvement offered by the new firmware will require careful evaluation under controlled conditions, but it's great news, all the same.

It's difficult to talk about the new features of the 1.9 camera update without mentioning that they have been a while coming, and owners will be forgiven for receiving them with a sigh of relieved impatience when the update rolls out for other other Blackmagic cameras. Happily, this is expected in next few weeks.

The implementation is nice: the status strip is moved from the bottom to the top of the display, and the scopes can be called up or dismissed with a simple vertical dragging action. Responsiveness of the audio metering and histogram is smooth, and the meters (at least going by a squint at the video featuring CEO Grant Petty) are actually calibrated, something conspicuously missing even from moderately high-end video-stills hybrids such as the Sony Alpha 7s, with which Blackmagic's cameras might, in some applications, be considered a competitor.

I would have liked waveform monitoring as an option, although that's much more computationally intensive and there might be legitimate concerns over the available processing horsepower. You can still plug it into a Macbook via Thunderbolt and run the UltraScope software to get test and measurement displays, and these are probably better than anything available on even quite high end cameras.

This update still doesn't allow people to delete clips or format the storage, and although doing that in camera isn't always a good idea, there are field and documentary shoots where the feature might be welcome. Perhaps next time. That aside, though, the price-performance ratio of Blackmagic's Production Camera remains sky high; despite adding significant new functionality, this is still a free update.

Check out the full press release from Blackmagic after the page break.

Camera 1.9 update is available now free of charge from the Blackmagic Design website.

Using these additional displays for the Blackmagic Production Camera 4K means that customers can easily and quickly check important camera settings such as exposure, audio level and the remaining space on their recording disk.

Using the histogram scope, customers can now easily and rapidly set exposure in a shot as the histogram shows the the distribution of luminance in their images and if highlights or shadows are being clipped. Images with clipped highlights or shadows make it much harder to color grade the shots in post production, so having the histogram feature helps DOP’s shoot with confidence. The histogram scope is real time so highlights and shadows can be adjusted interactively with the lens setting, ensuring images are not clipped and maximum detail in tonal ranges is preserved, critically important for allowing colorists to create amazing grading effects in post production using the full contrast range of the camera.

Camera 1.9 software update also includes a new audio metering with peak hold feature to allow setting audio levels for Channels 1 and 2 when using the built in microphone as well as externally connected audio sources. The audio meters make it fast to view audio levels and adjust camera audio gain so that audio is not clipped or distorted.

This update is available to our Blackmagic Production Camera 4K customers free of charge. Customers can download this update now and install it onto their camera from either Mac or Windows computers using a simple USB cable connection to the camera. Once the update is complete, customers can view the new on screen menus by simply swiping their finger up from the bottom of the capacitative touch screen.

“We are extremely excited that we have been able to provide yet another release for our camera customers ,” said Grant Petty, CEO of Blackmagic Design. “Having this new heads up display with on screen scopes will enable film makers to shoot the most amazing images with confidence that they will get incredible results in post production!”

Camera 1.9 is available now for download from the Blackmagic Design web site free of charge for all Blackmagic Production Camera 4K customers.

Product photos of the Blackmagic Production Camera 4K, and all other Blackmagic Design products, are available at www.blackmagicdesign.com.