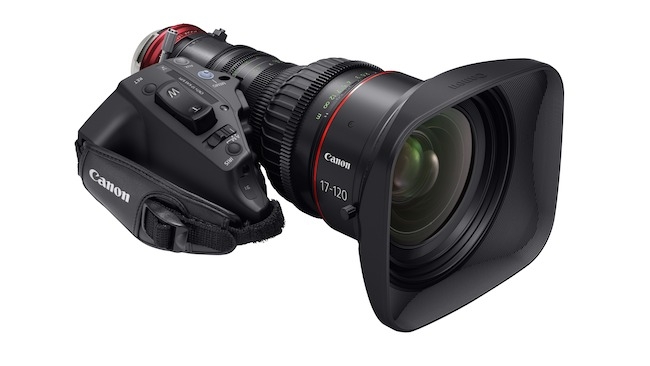 Canon is planning to major on 4K at the upcoming IBC2014, amongst other things highlighting its recently announced CN7x17 KA S – the company’s first-ever cinema lens to feature a servo drive unit.

The CN7x17 KA S is available in EF-mount and PL-mount versions. The servo drive unit grants high speed zoom, iris and focusing, which makes it work well with the quick set-up times associated with docos and current affairs (immediate start-up helps there too), while low speed functionality at the other end of the scale is great for finessing slow zooms etc.

The servo drive unit can be removed completely, with follow focus units and matte boxes fitted, while re-installation is promised to be quick and simple. It also supports full communication between lens and camera, the EF-mount version uses Canon’s own system, while the PL-mount version becomes the first in the Cinema EOS series to support Cooke’s /i Technology.

The IBC focus for the company though is avowedly 4K, with live demonstrations planning to include 4K output from studio camera configurations and live colour grading enabled by its 4K reference monitors. Canon in fact promises that show visitors can get hands-on with over 100 lenses in a vast array of focal lengths and types, from ENG to cinema to EF lenses. And in celebration of the continued success of the Cinema EOS System, the stand will also display the entire line-up of Canon’s X-series camcorders, providing visitors the opportunity to touch and try the recently announced XF205 and XF200.