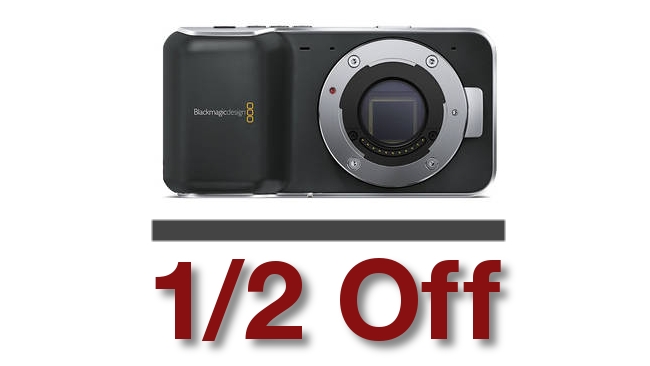 Although a little under 10 months old, the Blackmagic Pocket Cinema Camera can be had for half its original retail price, but for a limited time only.

What a difference a year makes, or in this case, a little over ten months. Last year, Blackmagic released its diminuitive yet powerful Pocket Cinema Camera, a 12.5 ounce camera body that can capture 13-stop HD in ProRes HQ, or with a firmware update, CinemaDNG RAW. It arrived with a price tag of $995, and the price held firm...until now.

For a limited time (until August 31, 2014 to be exact), the Blackmagic Pocket Cinema Camera will be available for the astonishing price of $495 at Blackmagic resellers around the world. Although 2014 has been punctuated with several 4K camera releases at various price points, there's still a lot to be said for Blackmagic's mini-marvel. And at $495, it's a steal for a camera with excellent image quality (especially for the price) and that you can take anywhere and cram into the tightest of spaces.

Is this new pricing a result of increased pressure from competitors? Is Blackmagic clearing stock in advance of the next version of the Pocket Camera? It's hard to say, but once September 1st rolls around, the BMPCC reverts to its original retail price, so get one for $495 while you have the chance.

For more information on Blackmagic's Summer Sale and a run-down of the Pocket Cinema Camera's features and specs, check out the full press release after the page break.

Since its introduction, the Blackmagic Pocket Cinema Camera has been used in thousands of independent films, television commercials, music videos and anywhere cinematographers need a high quality digital film camera in a stealthy super small size.

Unlike regular video cameras Blackmagic Pocket Cinema Camera is a true digital cinema camera as it includes a super wide dynamic range image sensor with 13 stops of latitude, allowing feature film quality images. A common mistake in the television industry is the assumption that more resolution means higher quality. Most cameras produce"video" looking images that suffer from highlight and black clipping that limits details. Blackmagic Pocket Cinema Camera's wide dynamic range eliminates this problem and provides film quality with dramatically more detail retained in black and whites in the image. Once the shoot is complete, DaVinci Resolve Lite 11 color correction and online editing software can be used to adjust images and take advantage of this extra range in the images.

To eliminate the damage that low bit depth and high compression video storage creates, the Blackmagic Pocket Cinema Camera includes a easy to use SD card recorder that allows the full sensor dynamic range to be recorded in professional ProRes 422 (HQ) format, as well as 12 bit Log RAW lossless compressed CinemaDNG format. These files can be read by high end video software as they are all open standard.

“We have worked hard to set up this exciting special price to allow more people to afford a super compact digital cinema camera that they can personally own. However stock is limited at this lower price so customers who want to buy at this price will need to move fast,” said Grant Petty, CEO, Blackmagic Design. “We are extremely proud of the Blackmagic Pocket Cinema Camera and we want to thank all the cinematographers who have send us examples of the work they have completed with this camera. We want to thank everyone for the wise and intelligent feedback they have given us and we hope this special offer is a great way to show our appreciation to the wonderful customers we have. For us, this is a dream come true!”

The Blackmagic Pocket Cinema Camera is available now for $US495 until 31 August 2014 subject to availability from Blackmagic Design resellers worldwide.

Product photos of the Blackmagic Pocket Cinema Camera, and all other Blackmagic Design products, are available at www.blackmagicdesign.com.