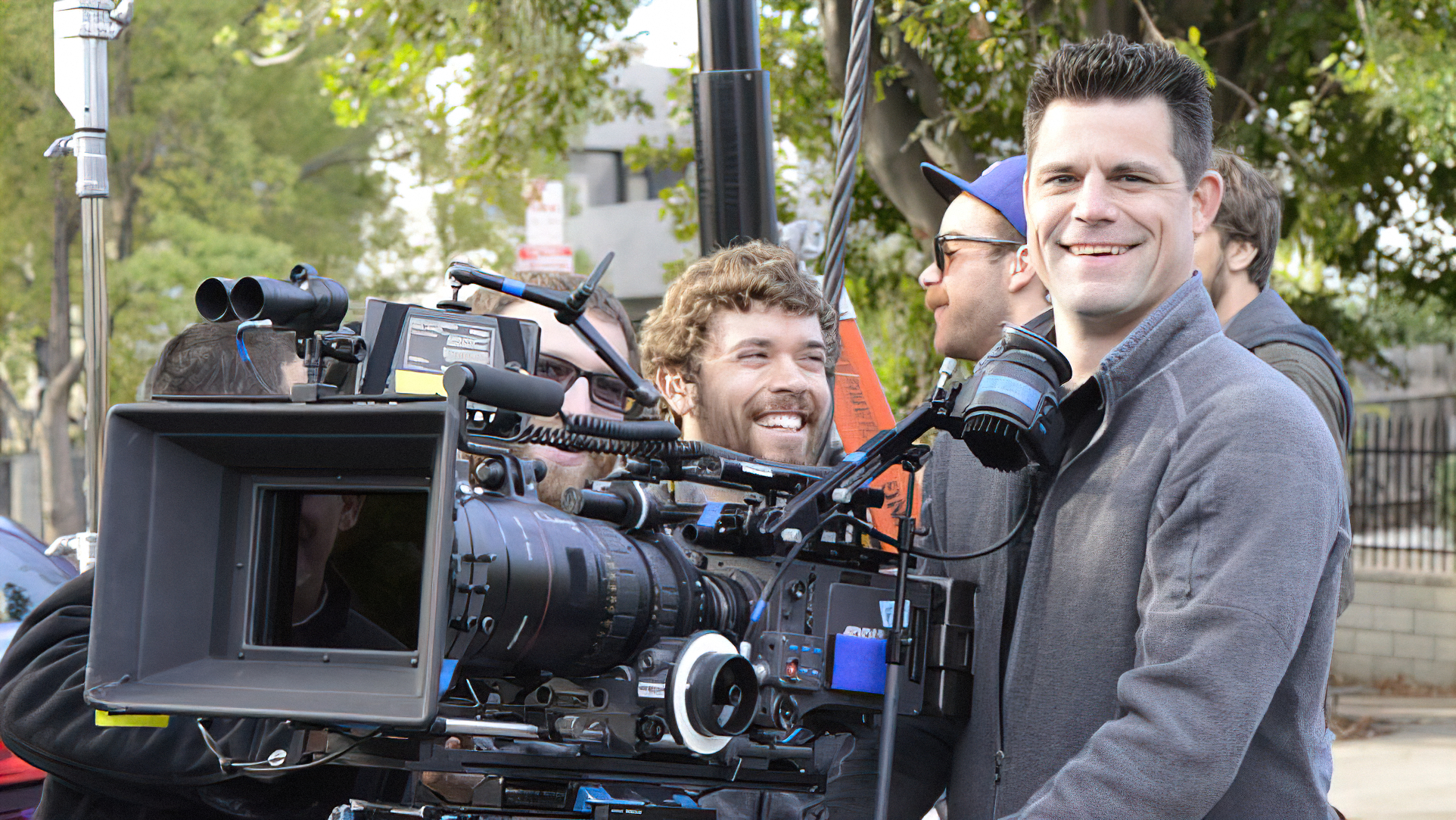 Replay: Phil Rhodes gives us the run-down on Brad Grimmett, Steadicam operator: how he got into the business, why he moved to Los Angeles, and advice for anyone just starting out.

Steadicam operator Brad Grimmett hails originally from Florida, and now lives in Los Angeles, with dozens of credits in both film and television, including work on Agents of S.H.I.E.L.D, Dexter, Dollhouse and CSI, and films such as Taken and Dark Skies. 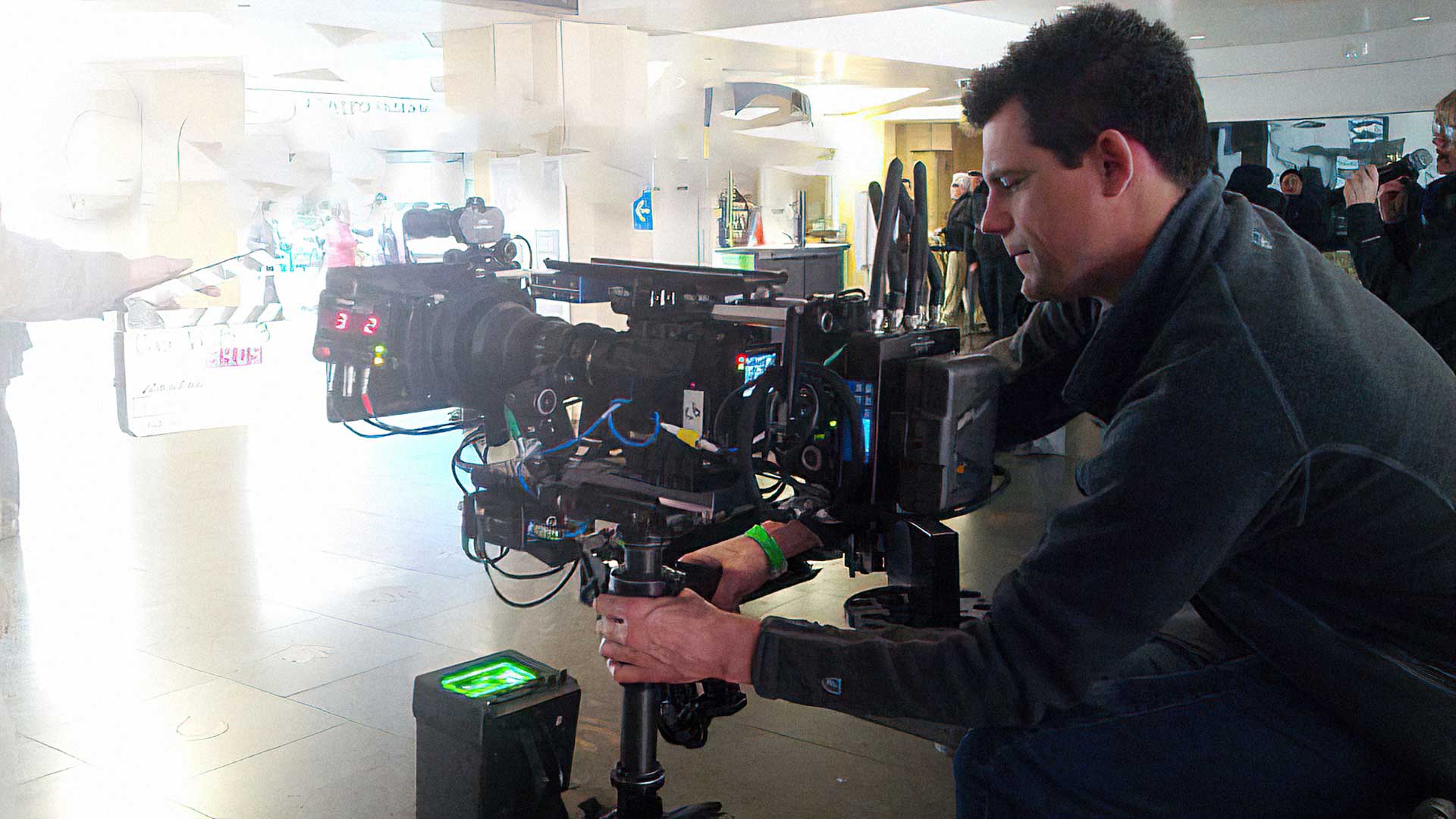 "While I was at college I ended up interning at a CBS affiliate and I eventually got a job there. I started out shooting news: spot news, car crashes." This presented something of a scheduling conflict, however: "I basically fell in love with camera. But it was a 40 hour a week job; I had to be there or else they would fire me, and college took second place." Post-education, Grimmett shot corporate productions and worked a lot as a utility, picking up and laying out thousands of feet of heavy triax camera cable for sports event coverage for the likes of the NBA and golf tournaments.

"We would work around ten days, and in the first three or four we would lay about 120,000 feet of cable, and on the Monday you'd come in and pick up 120,000 feet before lunchtime." Crew would tow these cables around with golf carts in an attempt to lighten the physical workload. Grimmett, at six feet five inches tall and two hundred and twenty pounds, might have found this easier than some. On one memorable occasion, just after the Atlanta Olympics, a hundred and twenty 1000-foot cables were cut in half by a desperate crewmember. "The truck guy noticed he suddenly had two hundred and forty five-hundred-footers."

Despite Florida's kindly climate and reserve of skilled crew, career-building opportunities there were limited in type, if not in scope: "I was working almost exclusively in commercials. I worked on one movie while I was there, and it's nice to do something else."

The market was also affected  by an unexpected vector: the events of September 11, 2001. In a reminder of the wider effects of such tragic news, Grimmett remembers that "people used to come to Florida all the time, but now nobody wanted to fly." It might be reasonable to consider this overcautious, given the post-attack flurry of bolted stable doors in the aviation security sector, but regardless, "9/11 ruined the work in Florida."

So, having invested in Steadicam equipment in 2000, Grimmett made the move to Los Angeles in 2002, not without some trepidation. "I did have people in Florida say 'you'll be there for a year, you'll hate it, you'll hate the people and you'll be back here.'" Happily, things didn't go quite like that.

As we saw recently in our article on a particularly venerable piece of Steadicam equipment, filmmaking gear in general can have a far longer shelf life than cameras in particular. While there are probably a few Sony HDW-F900 cameras still working, it's difficult to imagine much 2000-vintage, owner-operated camera equipment making anyone a living, an idea Grimmett identifies with. "I would never buy a camera. I considered buying lenses a few years ago. It would have worked out well, we found later, but hindsight is 20-20."

Now, however, there's a feeling that the Steadicam market is being diluted. "Knowing what I know now, if I were to do it again today, not in 2000 but in 2014, I would not buy a rig. It used to be very specialized and they paid specialty prices. Now, if you're on their list of people, there's 20 people behind you on the list. And some of them are really green, some of them are very good. The power a UPM has when negotiating, is that someone will say yes to the rate, no matter how low, just to get the work."

The waters of owner-operated equipment are, as ever, shark-infested. Grimmett advises, "The one thing I would say is that if you're thinking of going to film school and spending a lot of money and taking out a lot of loans, I'd say take that money and go be a PA for a couple of years. Go and do that with the intent to ask every department at every opportunity, what can I do for you. That's what I did."

Steadicam can be, as anyone who's tried one on will know, extremely physical. Fully-accessorized outfits can weigh 80lb, and Grimmett's triax-pulling physique is clearly of use, as is the training of long experience: "When I was 3 years in, the wall was a lot earlier. Now it's a lot later. The physical muscle memory is just as important; it's not just the fine adjustments of your hands, but the whole body, to know how to handle it without cracking under the pressure."

One production, memorable for all the wrong reasons, went to 47 takes on one particular four-page, one-shot scene. "I was pretty well beat up. And that's fine and I did it, but early in my career, I wouldn't have been able to. The other end of the scale were the next two pilots, very good and experienced guys, directors of pilots, and they used [Steadicam] very sparingly for very specific things. They knew what they were doing." 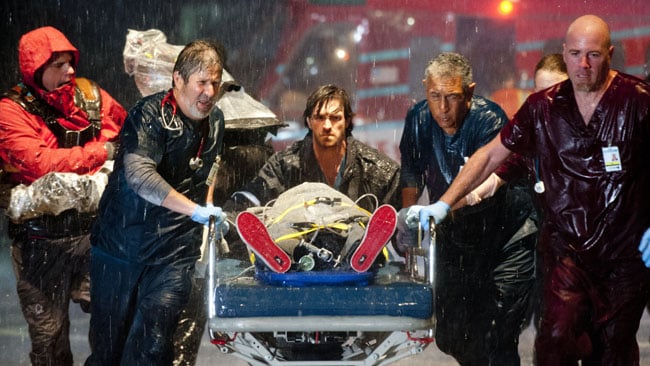 A very wet Steadicam (and operator).

Ultimately, Grimmett seems content. "I'm having lots of fun. I become more of a realist about what the business is. It's a movie and television factory and you have to plan ahead." That planning is, to some extent, being disrupted by changes in the traditional season-based scheduling of American television, with an increased amount of short and summer seasons. And there's been a refreshing change toward what we might think of as healthily risk-taking television. "TV is very good right now because there are a lot of networks looking do the most creative, interesting show."