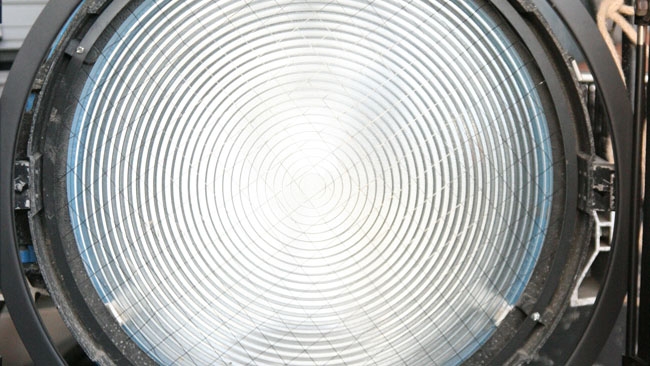 HMI remains a viable and useful lighting technology. Phil Rhodes explains the science behind this enduring type of illumination

We now have cameras with usable five-figure ISO ratings. This is good, of course; clearly, the decline of cinema can only be reversed by films featuring a black cat in a coal mine at night, although I fear that more conventional fare will remain key to popularity in the mainstream, and we're therefore going to continue to need big lights. Whether the justification for that is simply the need to achieve exposure over a large area, overwhelm existing light, or create high contrast, trucks full of multi-kilowatt lighting instruments are likely to continue being used on productions worldwide. This, then, is about gear we like that's far from new but remains just as useful.

To date, the lighting equipment which produces the most photons in the smallest area is probably still HMI, at least at that sort of scale. Point sources can be diffused; larger sources are harder to concentrate into a single spot, and the point source is therefore generally more flexible. When the truck also contains a large, capable generator, it's trivial to pull out either HMI or tungsten lighting with similar characteristics, but that's an expensive operation, not only because of the sheer equipment rental, but also because the truck must be fuelled, transported and crewed. There is significant value, therefore, in lighting that can be powered from common, conventional mains in any home or business. In the UK, and other places where similarly-capable mains supplies are generally available, this means that the 2.5kW ArriSun HMI – or equivalent - is the quicksilver bullet of independent filmmaking. 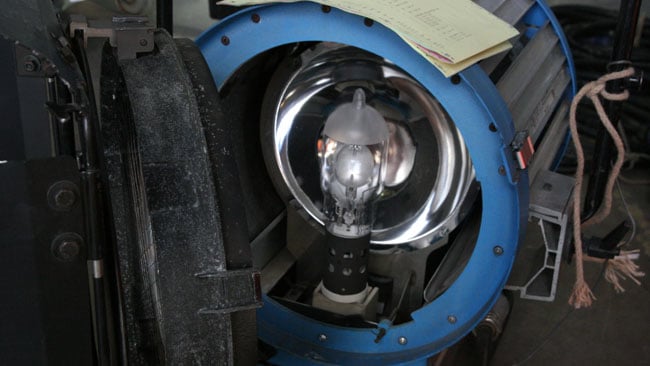 HMI stands for hydrargyrum medium-arc iodide – it's a mercury-iodine metal halide lamp, where the mercury emits ultraviolet light when electrically bombarded, and the iodide ions downconvert that light to visible white, with a spectrum very similar to daylight. The design originated specifically for film and TV work with Osram in the 1960s, when it was realised that lighting using electrical discharge in low-pressure gas could be made to closely approximate the sun and would do so with high efficiency. There are significant downsides to any metal halide lamp (including, to some extent, fluorescent tubes): they are electrically tricky, requiring careful current regulation. A column of ionised gas is close to being a superconductor, with no resistance, so huge currents would otherwise flow and the equipment would be damaged. Legacy designs use inductive current limiting in the same vein as an iron-ballasted fluorescent tube. These conceptually simple ballasts will cause the lamp to flicker at the local mains frequency, however, and modern ballasts have options to run the lamp at various frequencies, optimising either for output that flickers so fast that it isn't a problem regardless of the acquisition frame rate, or for acoustically quiet or efficient operation.

Ignition is the other tricky issue. Both fluorescent tubes and metal halide lamps require a high-voltage pulse to cause the gas in the lamp to break down and ionise, becoming conductive. The higher gas pressure in a metal halide lamp – particularly if it is hot – makes this more difficult. HMI lamps may require tens of kilovolts to hot-start, whereas the normal running voltage of the lamp is a few tens of volts. Modern ballasts accommodate this with more efficient switched-mode power supplies and powerful tesla coils to start hot lamps, but hot-start still isn't entirely reliable.

Because of all this complexity, it should come as no surprise that HMI is expensive. The lamp itself is typically a glass bulb surrounding an arc tube made of quartz (glass would melt at operating temperature). An HMI ballast is, internally, a piece of big, serious power electronics. The ballast for an 18kW HMI comes on a small wheeled cart, and that's the smaller, lighter, more modern electronic version. For all that, though, HMI might be as close as we can get to the ideal light: a point source, high power, hot restart, and excellent colour rendering. The only problem is that HMI cannot very reliably be dimmed – or rather it can, but the colour wanders and dimming can reduce the life of that expensive bulb. 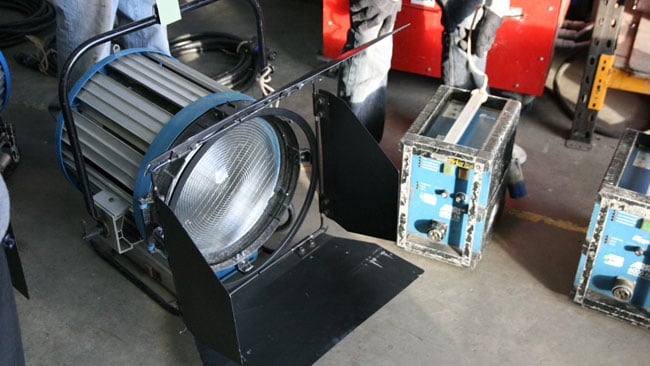 Secondhand HMIs retain their value alarmingly well, and good deals are typically snapped up. Older units at the most affordable end of the used market are likely to be iron-ballasted and care must be taken that they don't produce flicker problems, especially when shooting cinema frame rates in 60Hz countries. The issue can become particularly invidious on rolling-shutter cameras, which can show not only whole-frame flicker but also ripple or graduation within each frame, although it can typically be controlled to the point of acceptability if not perfection. People shooting in 50Hz countries have the option to shoot 25p, obviating almost all of the associated issues. Also, older HMI ballasts may be difficult or impossible to repair, requiring large magnetic components that are no longer available or would require labour-intensive rewinding. Even the cables to run from the ballast to the lamp head are expensive.

Notwithstanding, the sheer power and wall-socket powerability of the 2.5kW HMI fresnel makes it gear we like. LED is unlikely to become a competitor to this sort of equipment for some time, and while it is intrinsically flicker free, dimmable, lighter and more robust, and easier to drive at an electronic level, the power density is currently an order of magnitude away from that of which HMI is capable. The biggest LED modules which might reasonably be considered for inclusion in a fresnel housing are rated at a couple of hundred watts, and of similar luminous efficacy to HMI if we want reasonable colour rendering. They also require aggressive air cooling, producing a noise problem. Perhaps, eventually, we'll be able to replace metal halide with solid state light, but there's no prospect of that becoming available in the next few years.

For our cousins across the world who may not have access to 3kW per household power socket, I would suggest that the 1800W HMI PAR is probably the best equivalent. Fitted with appropriate lenses, the output can be similar if naturally somewhat less powerful, and PARs are flexible devices anyway.