Massive shootout between GH4 and four other cameras 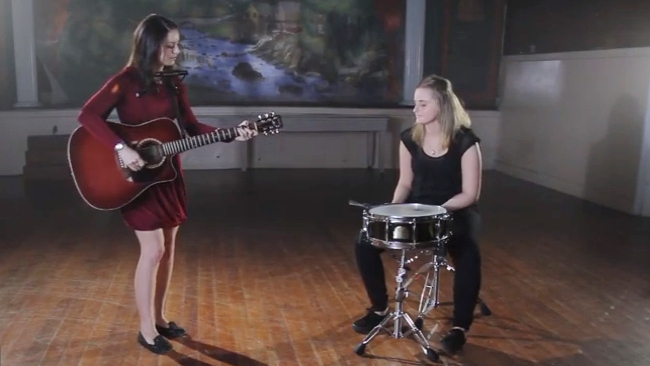 Here's a clever comparison between five of the top HD camears and one 4K one. The methodology is clever, but not perfect, as the authors discuss

Andrew Dean wrote to us to mention this clever comparison between the GH4, GH3, 5D Mk iii, 7D and the C100. Here's part of his behind the scenes methodlogy - you can read the rest of it on his blog after the video.

Remember: this isn't scientific, and it's brought to you via a highly compressed video streaming service, but it's valid in exactly that sense: that this is how much of our video is delivered these days.

What strikes us is how good all these cameras are!

I got a call last week from my friends at Tandem Studios that they were on the list to demo the upcoming panasonic GH4.  There has been a lot of buzz about this camera and quite a few of us tentatively are considering it as our next camera purchase.  The small size, 4k recording and 200mbit 1080 make it sound, at least on paper, pretty amazing.

When it was my turn to get my hands on the preproduction camera, we only had a few hours to do whatever we were going to do.  I rang around local freelancers and were able to gather a handful of cameras to compare with the gh4.

Plenty of other people have shot tech tests with the gh4, but what I wanted to see was how it handled a typical shooting scenario for dslr shooters and how it directly compared to the cameras we were currently using.  Based on this, we set the shoot up with the following criteria:

1. Each camera operator would set their camera up how they normally shoot with it, including color profiles.

2. The lighting would be fairly contrasty to show strengths/weaknesses of dynamic range, and targeted to fall between 200 and 800 ISO - the intensity typical of one of our indy shoots.

3. We'd haze the room.  Haze gives a lovely "volume" to light, but also, the tiny particles in the air can show up as "details" to the camera and can really push the limits of the codec.  (similar to fields of fine grasses/trees with small leaves)

4. Each of us considering the gh4 were planning to pair it with a metabones
speed booster, so the gh4 would have one for the test

5. All the lenses would be stopped to f4, to get them into their "sweet spot" and to not make this too much of a "narrow DOF shootout".

6. We'd juggle lenses and positions as much as possible to get similar frames out of each camera.  Especially with the primes we struggled to match framing exactly , but got pretty close.

7. To test skin rendering and to match "real world", we'd shoot musicians performing as many setups as time would allow, like a sort of minimalist music video.

So, with that in mind, I invite you to watch the resulting camera test/ music video.  Each camera number is tagged in the frame so you can keep a running track of which cameras are doing something you like and dislike.  The cameras are revealed at the end of the video.

Read the detailed account of the GH4 shoot here