Blender's Project Gooseberry – A Sheep in an Open Cloud 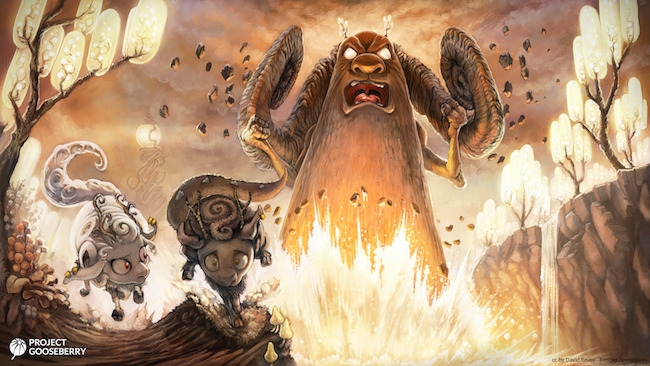 A scene from Project Gooseberry's Moodboard

Normally when a content creation software adds cloud features, that basically means that restrictions are employed. The software might not work anymore without internet access and options like storing assets in the cloud are meant to further bind a customer to the software. Blender is doing it differently.

The Blender Foundation also has plans for cloud features like asset libraries and online collaboration tools, but in a different, non-restrictive way. All tools developed will be open source and users will be able to deploy them on their own servers or internal networks. A subscription-based option of the Blender cloud running on servers of the Blender Foundation is already available, though in very early beta.

The tools are going to be developed the Blender way – that is with developers side-by-side with users working on a project. For the Blender cloud that will be Project Gooseberry – a feature-length Open Movie created by 12 studios from around the world with a small team coordinating the efforts from the Blender Institute in Amsterdam.

Only little information is available about the story at the moment. The main character is a sheep who longs for a more interesting life and gets its wish fulfilled. His different options for a new life will be portrayed in episodes of about five minutes each so all the studios can put their own style into the film. The director will be Mathieu Auvray and the script is written by Esther Wouda who was involved with the open movie Sintel before.

Production shall start in May 2014 and the premiere of the movie is planned for November 2015. During that time, not just the artists from the 12 studios will work on the project, but also 15 developers who are responsible for creating the online collaboration tools and improvement of the Blender software itself. Notable targets are improved physics for cloth and hair and speed improvements for the animation system and Cycles renderer,

On the online-collaboration side a content- and asset-manager and additional tools for project management are planned, plus a version control system directly inside Blender and improved network rendering for simple sharing of GPU and CPU-resources between workstations and render nodes.

To finance the project, the Blender Foundation got funding from film subsidies and sponsors totalling €1.6m. A realistic target to finance the movie would be €3.5m and an optimal amount would be €6m. As an additional way to fund the movie, an early bird subscription campaign to the Blender Cloud has been launched. Those who subscribe to the cloud during the next 8 days and keep their subscription until the movie is finished will get a mention in the end credits. As an additional incentive, the assets and training materials of the past four Open Movies (Elephants Dream, Big Buck Bunny, Sintel, Tears of Steal) and all training DVDs produced by the Blender Institute are available through the cloud already, to stream and for download. The assets for the Gooseberry film will be available as they are produced. All content is under licenses that allow commercial use.