First footage: Cooke's Anamorphic Lenses. Digital Cameras have been waiting for these! 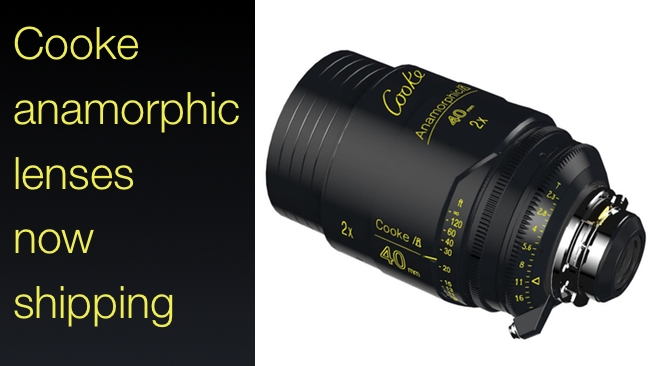 Cooke Optics is now shipping their much awaited range of Anamorphic lenses.

We love Cooke lenses. We really like the way they look and that they seem to fit so well with digital cameras. That's not to say that other lenses aren't good either (of course they are!) but Cooke lenses would be right up there on any shortlist.

We also love anamorphic lenses. In a way they seem like a blast from the past; a way to squeeze a widescreen image onto a slimmer film emulsion. But in doing what they do, they seem to bestow some almost magical qualities on the image. We just can't resist the vertical oval bokeh that can be, admittedly, overdone if it's used just for the effect (you can perhaps excuse Cooke for allowing this to happen in their demo reel below).

Fit so well with digital cameras

There are two main reasons why anamorphic lenses fit so well with digital cameras. The first is what we've hinted at above: they almost cast us back into the heyday of film. There's always something slightly retro about them, in a good way. Second, they actually make a better use of a digital sensor. Without using anamorphic lenses, the only way you're going to get super-wide aspect ratios is to crop the image top and bottom. Cropping is throwing away. It reduces resolution. It works but it's not the best way to do it.

Anamorphic lenses use all of a camera's sensor. The technique is a type of optical compression. It's done in the analogue domain so no pixels are going to get crunched or damaged. The only thing is that the finite number of pixels in the sensor are going to have to resolve a wider image than otherwise, but it's all done at the full resolution of the sensor, so there will be no digital artifacts whatsoever.

Here's our piece about our visit to the Cooke lens factory earlier this year, and below is some test footage shot by John de Borman BSC and Patrick Blossier using Anamorphic/i lenses on an ARRI Alexa Studio camera

Cooke's press release in full is available after the break

Leicester, UK – 14 March 2014 –Cooke Optics, the multi-award winning manufacturer of precision lenses for film and television, is pleased to announce that it is now shipping the first sets of its Anamorphic/i range. The Anamorphic/i lenses will be available for demonstration on Stand C6144 at NAB 2014, together with Cooke’s range of miniS4/i, S4/i, and 5/i lenses and the Cooke Metrology lens test projector.

“We promised at NAB 2013 that we would be delivering our Anamorphic/i lenses by NAB 2014, and we are,” said Les Zellan, Chairman and Owner Cooke Optics. “We recently released some test footage shot by John de Borman BSC and Patrick Blossier using Anamorphic/i lenses on an ARRI Alexa Studio camera, and the reaction to the optical quality and beauty of the pictures has been fantastic.”

The footage, as well as the 32mm, 40mm, 50mm, 75mm and 100mm Anamorphic/i lenses, will be available to view on the stand. The Anamorphic/i lenses, which are approximately the size of Cooke’s industry standard S4/i lenses, retain the Cooke Look®, are colour matched with the Cooke 5/i, S4/i and miniS4/i ranges, and come equipped with /i Technology to capture lens metadata. The 25mm and 135mm lenses will be available later in the year.

Cooke will also demonstrate its range of S4/i lenses, which were used by cinematographer Sean Bobbitt BSC to shoot the Academy Award®-winning feature film 12 Years A Slave, as well as the miniS4/i and 5/i lens ranges.

Cooke continues to develop its Metrology line of lens testing equipment and will have its lens test projector on the NAB stand. Progress also continues apace in the development of /i Squared, the next generation of /i Technology, which is planned for release later in the year.  /i Squared will include all the existing /i Technology commands as well as inertial tracking data to greatly enhance the metadata’s usefulness to Post Production and VFX teams.