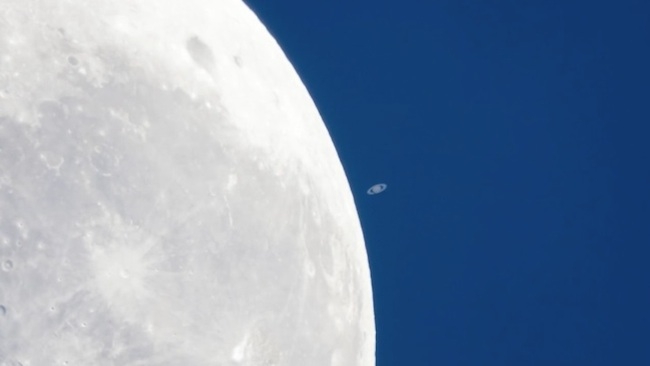 The Moon about to devour Saturn

Want to capture two objects over 1 billion kilometres apart in the same frame? Magic Lantern is the key.

With many thanks to planet5d  for the tip, the above still is from a rather awe-inspiring video taken by Colin Legg in Perth, Western Australia. It shows a Moon/Saturn occulation in realtime, the Moon’s orbit taking it in front of the ringed planet just after dawn over Australia.

These things are like buses: you wait years for one and then four turn up at a time due to the Moon orbiting the Earth at a slight angle with respect to the Sun and planets. So while there hasn’t been a Lunar/Saturnian occulation in Australia for a decade, this is the first of four that can be viewed from Western Australia this year alone.

Colin Legg takes up the story: “The first, February 22nd, was a daylight occultation, with first contact occurring right on dawn in WA. I have wanted to video this event for years. The challenge is to capture sharp well exposed images of both the Moon and Saturn as they converge.

“Saturn is tiny compared to the Moon due to it’s much larger distance away,” he adds with masterful understatement, “so you need a fairly good telescope to nicely capture both the planet and its rings.”

Stability: At 2000 mm focal length you need a solid tripod, well balanced camera and no wind. Camera mirror slap and shutter shake are both sources of unwanted movement.

Dynamic Range: The limb of the Moon is quite a bit brighter than Saturn. A 14-bit, DSLR has adequate range, 8-bit is too narrow.

Resolution and Scale. Smaller pixels are preferred to capture the fine details. At least full HD (or close) is needed to include as much of the Moon’s limb as possible.

The first requirement is best served by video capture. Electronic shutter eliminates camera shake, while the second and third requirements are best served by classic DSLR still capture. An EOS-1D C or RED would have met all requirements, but neither are particularly available in Western Australia and hire costs of up to and over AUS$400 a day tend to be prohibitive.