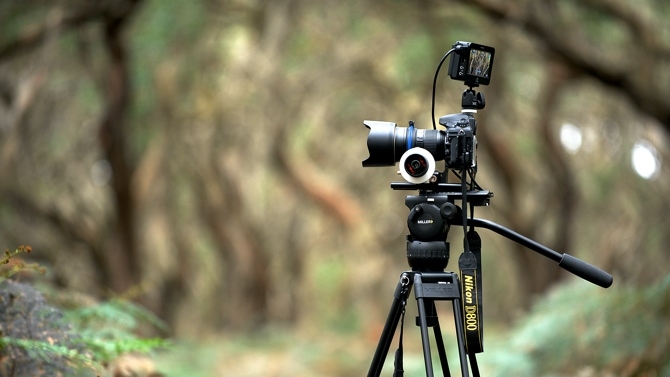 DSLR users have long complained that they can't get clean, unadulterated line outputs suitable for high-quality recording. But the D800 is different. Phil Rhodes tests it with an Atomos Ninja 2 Field Recorder

The biggest frustration of all has been, until now, that virtually all DSLRs include their viewfinder information in the HDMI's video. You can't remove this, it's part of the signal. Not putting it there in the first place is probably not rocket science, one would think.

It's probably coincidental, but during the time DSLRs have become established as moviemaking tools, we’ve also seen the rise of standalone recorders. This is almost a throwback to the days of the 1970s when a video recorder was frequently a satchel full of electronics, but now they're the size of a pack of cards it's hard to complain.

In many ways, this is a match made in heaven. Cameras with big single chips connected to flash data recorders with decent codecs are a useful combination. So far, though, there have been additional problems, ranging from moiré and aliasing to the fact that, too often, the recordings made on some early external recorders – such as a 50Mbps MPEG-2 stream – were not significantly better than those available on board.

Ironically, it’s the tendency of DSLRs to provide only fairly quick and dirty internal recorders that make this option more relevant, and the tendency of everything from cellphones to tablet computers to include an HDMI output makes it more feasible. The combination of the Nikon D800 and Atomos’ Ninja 2 recorder is, excepting the Panasonic GH series, probably the first widely recognised combination capable of using HDMI as a high quality camera-to-recorder link.

This article isn’t intended to be an in-depth review of the D800 as a video camera, but it’s worth considering the politics of the situation. Canon makes both prosumer camcorders and lenses for all levels of film and TV production, and there are presumably considerations regarding internal competition within the company. Whether this explains why Canon insist you buy a C300 to get uncompressed output from a single-chip camera, I don’t know, but what’s certainly true is that Nikon is a player solely in the still photography market (and in some unrelated areas of scientific imaging). So, one might surmise that commercial concerns are less of an obstacle for Nikon than they are for Canon, and that might be why the D800 has the critically unadulterated HDMI output.

From a picture-making point of view, at the time of writing everyone was getting very excited by the BBC’s analysis of the D800, which finished on the rather withering opinion that the camera isn’t really suitable for serious programme-making. This, for some reason, immediately led to people on both sides of the debate claiming that the BBC had either “passed” or “failed” the camera, as if the BBC is somehow a world standards body with responsibility or authority to make that sort of decision for anyone. From what I’ve read the document in question doesn’t indicate whether some particular test has been specifically passed or failed. Instead, it delivers a narrative opinion that D800 has a lot of aliasing, much like more or less every other DSLR, and shouldn’t be considered for really high end work based on that problem. The D800 has neither passed nor failed anything, and anyone who claims that it has is guilty of oversimplification; that said, I would not choose to shoot something for broadcast television on one. Apart from that, it makes pictures that look like a... well, dare I say a young Alexa, and that's a very fine thing indeed.

The poor moiré behaviour – albeit probably not as bad as the original 5D mark 2 - is all the more disappointing because at least one other problem typical of DSLRs, the rolling shutter wobble, is well-controlled. Whip pans on don’t look nearly so ridiculous as they do on other DSLRs, and anyone planning a DSLR shoot involving a lot of handheld work would do well to consider the D800.

Basic imaging performance is much as on a lot of other modern, big-chip cameras: low noise, lots of dynamic range (around twelve stops), and enough pixels to be as sharp as a razor if only it was properly scaled-down from the enormous sensor – which in my view it isn’t. Audio capability, too, is limited to the usual 3.5mm stereo microphone jack, although the metering is nice and responsive.

Oh, and it has both SD and Compact Flash slots. I like that, although there’s no option to do internal recording to both at once, which is always nice from a redundancy perspective. Firmware update for that, Nikon?