Could this be the next DSLR revolution? (Hint: it's not even a camera!) 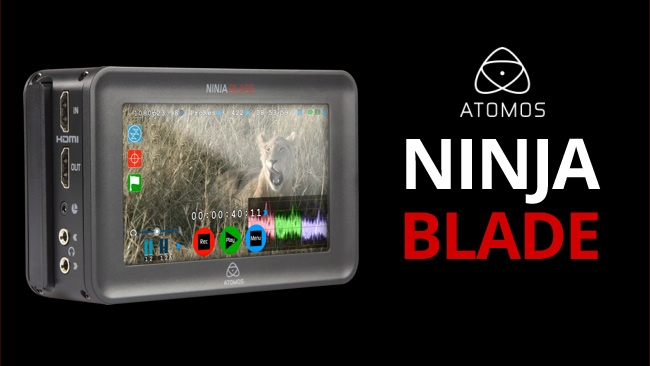 This new device from Atomos is what DSLR users have been waiting for - and its half the price we expected!

There's nothing new about external recorders these days. Back in 2011, they were the newest, most exciting thing. Let's just remind ourselves about why you might want to use one.

First, they have bigger storage. You can either record to SSDs or, in the case of Atomos recorders, an HDD as well, for almost unbelievably long record times, as long as you're not on a motorbike, driving off-road, or in a helicopter.

Next, they record direct to ProRes, or DNxHD: both edit-friendly formats that you can put straight onto your timeline and edit with - without any transcoding. They're efficient too: they're not Long-GOP, so they're easy to decode and you can do more stuff in real-time while you're editing.

Third, they have screens. Well, some of them have screens. This means that if the screen is good enough, you can use them as an electronic view finder (EVF).

So when the original Atomos Ninja came out in 2011, it came with the promise of all these things.

And it certainly worked. But there were drawbacks.

The first was that the screen wasn't all that good. But at the time, it was good enough to provide a touchscreen interface and a rough indication of what you were recording - and, somewhat later in the Ninja's lifespan - you could play back your material as well.

The second drawback was big. For many users it was a deal-breaker. It was that many cameras simply didn't work with the Ninja.

This wasn't the Ninja's fault: far from it. The problem was that the cameras in question wouldn't output "clean" video through their HDMI output. Instead of a perfect, uncompressed video feed, they'd superimpose all the usual viewfinder information onto the picture. There really was no way round this. Once that stuff's in the picture, it's in there forever.

So, while the Ninja was a success, it wasn't as big as it should have been. Truth be told: no-one, possibly including Atomos, was expecting this to be a problem, but it was, as more and more cameras were tested and were found to have the issue, and it remained until the camera operators started to relent and actually supply a clean HDMI output.

In parallel, Atomos developed the Samurai - the SDI equivalent of the Ninja - and SDI cameras output a clean digital feed almost by definition.

Meanwhile, in the background, Atomos' CEO, Jeromy Young, quietly started visiting the camera manufacturers in Japan, and began the task of persuading themto relent on their policy of blocking HDMI. Jeromy had an ace card up his sleeve: he speaks fluent Japanese!

We'll never know what went on in those discussions, but the remarkable outcome was that most new cameras now allow clean HDMI outputs.

So that's the first part of the picture.

What was always missing from the equation was a screen that was good enough to be used as an external monitor. The Ninja and the Ninja 2 were tantalisingly close, but the screen just wasn't good enough that you could use it as your main external viewfinder.

And that's where the new product comes in.

The new Ninja Blade, announced today, comes with a bright, high resolution screen that is easily able to act as an EVF, and to accompany this new role, Atomos has provided a suite of analysis tools as well, like waveform and peaking.

The final part of the picture, and the reason why we're calling this apparently evolutionary device revolutionary, is the price. It's about half what we were expecting, at $995, €749 and £595.

So now, you can have a monitor and recorder that will not only improve the usability of your camera, but will record directly to ProRes - improving your camera's output quality as well as extending record times.

The Ninja Blade is, like all of Atomos' products, well made. It's lighter than its predecessors and I would say that this is a very big advantage - it has to sit on top, or near, the camera, and any reduction in mass is very welcome. There's no apparent reduction in quality - it feels well made and tough.

The screen is certainly bright and clear. At 1280 x 720 resolution it's not full HD, but nothing else is at that size, either. It doesn't matter: you get an extremely clear view of what you're recording or what you've recorded. The full specification is:

The Ninja Blade shares Atomos' Patent Pending "Continuous Power" system where you can change batteries without powering down. It also comes with the same battery mounting system that allows batteries to be piggy-backed with accessories like the Connect converters, which convert SDI to HDMI and vice versa, depending on the model you choose.

As is usual with most Atomos recorders, the Ninja Blade comes in a professional, rugged carry-case that's got compartments for all its accessories, batteries and storage.

We think, with this capability, and at this price, this may shift the focus back to video-enabled still cameras. There's no 4K, but right now, very few clients are demanding it. There's still a lot of life left in HD, and a DSLR + Ninja Blade is going to be a capable combination for some time to come.

When you think about it, if you pair one of these with a good DSLR, you get visually lossless recording (if you use one of the higher bitrate versions of ProRes), virtually unlimited record times (subject only to your DSLR cutting out) and a professional level monitor. Not to mention the ability to play back your material. Compare that with an HDCAM deck of old!

You won't have to wait for the Ninja Blade, as, according to Atomos, it's ready to ship now.

We'll have a full review of the Ninja Blade in a week or so.

Atomos at the Cutting Edge at BVE 2014, London

The Ninja Blade brings new levels of professional monitoring to camera mounted recorders for DSLR's and any HDMI capable device.

“We are extremely proud to work with all the major camera companies, especially technology leaders  from Japan, which gives us a unique advantage over our competitors.” said Jeromy Young, CEO and  Founder of Atomos. “And I am especially pleased to be able to announce a product that is also ready to ship, which is something of a rarity in this industry these days. With the Ninja Blade we are able to deliver fantastic, professional-grade monitoring functionality and recording codecs straight from the multitude of
DSLR's, mirror-less and HDMI video cameras. And we can deliver it now, not in 6 or 12 months’ time.”

The Ninja Blade takes advantage of low-cost, modern technology by utilizing HDMI-capable pro-video and consumer camcorders, as well as DSLRs. Many features from Atomos are designed with real productions and real situations in mind, to create smarter workflows, keeping the highest quality but also keeping running costs low. The Ninja Blade was designed with a long battery life. Atomos’ unique Continuous Power technology (patent pending) means that you never have to interrupt recording to swap batteries

The new Ninja Blade features a stunning 1280 x 720 SuperAtom IPS touchscreen, at 325ppi 179-degree viewing, 400nit brightness and multi-frequency (48/50/60Hz) operation depending on video input, giving super-smooth monitoring and playback. Every screen is calibrated to SMPTE Rec 709 colour space and a D65 white point with 100% gamut from factory. On-the-fly screen calibration is built into every Ninja Blade, so you are always accurate in any shooting environment.

The Atomos Ninja Blade is now shipping for 995 USD, 749 EUR and 595 GBP (excluding tax and delivery) and will be available through the Atomos Worldwide reseller network. See www.atomos.com

converters that save video professionals time and money, without sacrificing quality.

Atomos is based in Australia, with offices in the USA, Japan, China and Germany partnering with a