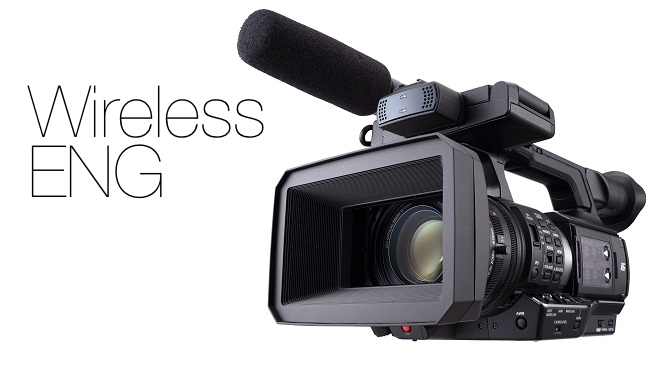 Confirming our theory that everything with a network connection is now described as "Cloud Ready", Panasonic has just released it's first "Cloud Ready" camera

That's not a bad thing, of course. It's pretty handy being able to uplink your material direct from the camera, either as a file or a live stream.

The P2 HD camera comes with AVC-Ultra recording with a "wide range" of recording bitrates, although we're not told whether the critical-for-broadcasing (for some) rate of 50Mb/s is supported. Recording is 10bit at 4:2:2 resolution.

The camera also has "AVC-LongG" which we would have thought was the same as plain old AVC, but apparently it also supports 10bit 4:2:2 recording, which AVC, being essentially a consumer format, doesn't.

The camera has two Micro P2 slots (or microP2 slots, as Panasonic punctuates them), and although Panasonic's press release doesn't articlate this exactly, you may be able to record with one codec and stream with another.

Competition is hotting up in this space, especially with JVC's streaming camcorder, the GY-HM650, at which the new Panasonic camera appears to take direct aim.

Update: We've just spoken to Panasonic, and apparently there's a lot more to this camera than is evident from the press release. We will have much more detail on this early next week.

Here's the press release in full:

Panasonic is set to launch its first handheld ENG camera with wireless connectivity, enabling recorded content to be shared almost instantly and accessed from anywhere.

The AJ-PX270 removes the need for traditional video uplink, perfectly positioning it for the growing live stream and freelance news gathering market. The camera enables a wireless production workflow via LAN, with additional 3G/4G/LTE application from Autumn 2014.

Rob Tarrant, European Product Manager at Panasonic said, “The AJ-PX270 can drastically improve the ENG workflow, getting content to air faster, which is important for any broadcaster in a 24/7 news and sports environment.

“But outside of traditional broadcasters, the move towards high quality video has been a phenomenon that shows no sign of slowing down. For corporate users, YouTubers and freelance news journalists, two microP2 cards mean simultaneous broadcast and proxy video transmission to a cloud server from almost anywhere.”
The AJ-PX270 is available from the end March 2014 at an RRP of € 5.840,00 (excl. VAT).