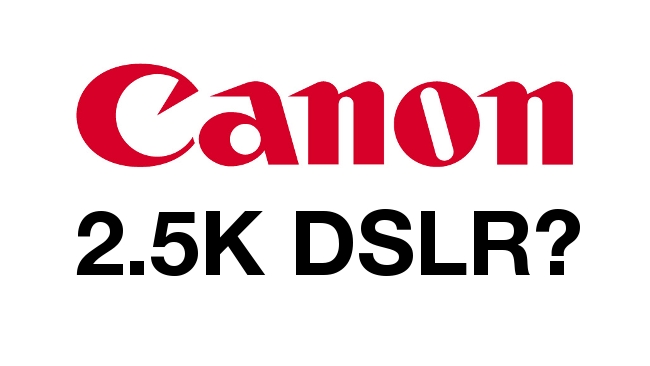 According a popular Canon rumor site, the camera giant may be prepping a new DSLR that falls short of 4K video, but adds global shutter to its DSLR lineup.

File this under: highly speculative.

We've featured rumors from the site CanonRumors.com before, but they're usually more substantiated than what we're about to share. The site has a system for rating rumors, C1-to-C5, with the C5 designation for rumors with a mountain of evidence, i.e. those that are closest to verifiable fact. The following rumor is of the C1 variety...

CanonRumors.com recently reported of some interesting rumblings from video professionals. Apparently, Canon is in the midst of selling of their gear stock in preparation of a new DSLR release, which will feature 2.5K video recording and a global shutter.

It's worth noting that Panasonic announced the GH4, it's upcoming micro-4/3 DSLR capable to shooting 4K video on-board. It was even on-hand at CES, and is set for a February 2014 release. If the above rumor proves true, Canon is placing a bet on sub-4K resolution, presumably larger sensor, and global shutter to compete in the DSLR video market.

Could this new Canon camera be the rumored 7D Mark II? Only time will tell. It's interesting that Canon would choose to effectively split the difference between HD and 4K, much like the Blackmagic Cinema Camera and the Digital Bolex offerings, but as Arri Alexa's dominance at the Oscars proves, resolution isn't everything.