Now that the Digital Bolex is shipping, we're getting the first location footage 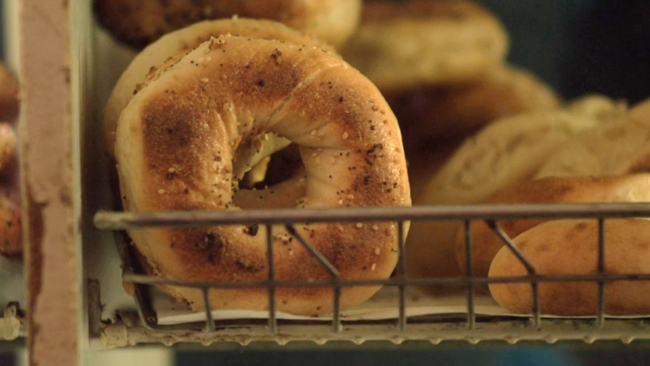 When I shot on the D16 last year with Joe and Elle in New York City's Central Park, I was able to get an initial impression of the camera (which I wrote about here.) Now that cameras are shipping to KickStarter backers, I was able to get my hands on one and take to the streets to start shooting!

My co-producing partner at Left Turn Productions, Keif Roberts, and I are currently producing a documentary about the Peter Pan Bakery and Pastry Shop, a long standing establishment that seems unaffected by the waves of change that have engulfed its Brooklyn neighborhood. Having spent some time with the D16, we decided that the camera's aesthetic image combined with some vintage lenses would an appropriate fit the for the bakery's story.

Taking the dailies back to our edit bay, we were very pleased with the images we got out of the camera. I was impressed at the latitude we were able to capture, as the lighting conditions were (literally) all over spectrum and we were commonly working with pools of light that had a 5-7 stop difference!
The location is incredibly small so we won't be able to do much in the way of tripod shooting, and we didn't have a shoulder rig handy for the location scout. The form factor of the D16 with its pistol grip felt great ergonomically and provided enough stabilization to get what we needed

Keif and I look forward to updating everyone on the progress of our documentary!

Some folks have already commented on the highlights, and I think that it’s a little too early, and this footage is a little too run-and-gun to make an assumption about the extent of the camera’s ability.  This shoot was about as run-and-gun / raw / on location as you can get.  There was no chance to hang or use filters or ND, we were working with all natural light and various lighting fixtures including high-intensity food service lamps.  On top of all this there was literally a blizzard raging outside!  I didn’t have my trusty Sekonic light meter with me, but the hard splits between what we were exposing for and what was being blown out would have been insane for any camera.

For everyone interested in checking out / playing with some of the DNG files, I’ve shared them here.