Where's RED in the Oscars? 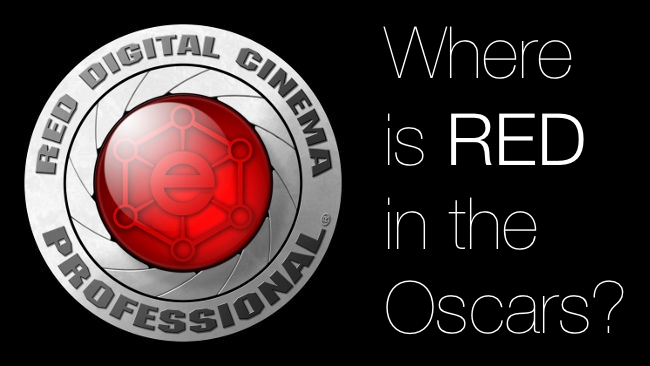 Where is RED at the Oscars

RED cameras are used in so many films. So why aren't they showing up in the Oscar nominations?

We've just seen a report that RED cameras weren't used for any of the Oscar-nominated films.

This may be mildly surprising because RED has been a staple of Hollywood cinematography for some years now and this does on the face of it seem like an anomaly.

But does it mean that RED is losing its grip on high-end feature films?

No, it doesn't. Because there are so many reasons why a film might not be nominated.

It certainly looks like the majority of the top nominated films were shot digitally, and the Alexa has pretty much swept the board.

Let's assume that RED cameras have been used in as many features as they normally are. But they're only, perhaps used in 20% of cases (we've plucked that figure out of the air, but it does seem about right in orders of magnitude and it would probably be quite easy to confirm using www.shotonwhat.com ).

Then those 20% of films have to go through the Oscar nomination process. This is a system that is barely more organised than randomness itself, if the writings of critics like Mark Kermode are to be believed. We won't go into that here but let's just say that it's not a process that maintains a linear relationship between the percentage of films shot with a given camera and the nominations themselves.

I think it's likely that with the current culture of celebrity actors and directors, and the whims and politics of the Oscar judges in play, their nominations and choices will be influenced only very marginally by the camera used to shoot the film.

And however good and clean or "warm" a camera's output might be, factors introduced in post production - and by the choice of lenses for that matter - will have a more significant effect than the look of the raw footage-as-acquired itself by any given camera.

What I mean by this is that most cameras will  give you clean, pure and unartefacted footage. Resolutions will differ, and, somewhat surprisingly, if you think resolution is king, the camera with the fewest pixels seems to have won though this year.

But this doesn't mean that RED, and for that matter the Sony F65, aren't capable of jaw-droppingly luscious footage. It's just bad luck for the camera manufacturers that in the fickle awards process, the movies that their cameras were used in just didn't percolate to the top of the pile.

What I would say to the naysayers is: 2014 is another year. Anything could happen, and probably will.