A GoPro anamorphic lens adaptor for $199! 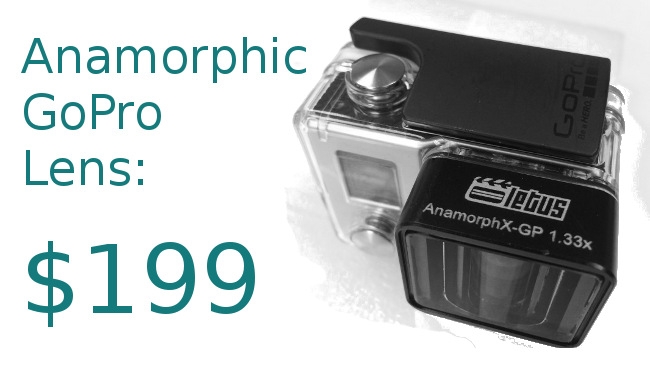 Now you can have cinematic widescreen with the GoPro Hero - ready to go with your new 21:9 television!

Anamorphic adaptors are normally very expensive, in fact Letus themselves have a budget anamorphic adpator that starts at a price of $1,695.00. So $199 is quite a revolutionary price.

However you won’t get all of the much cherished artifacts of anamorphic lenses with this adaptor, as it works with a 1.33x squeeze. On the one hand this is great as it’s exactly the right amount to get a 16:9 sensor to produce 2.39:1 images or to get a 4:3 sensor to 16:9. However it does mean that the bokeh in the out of focus parts of the image won’t be as oval as they would be with a 2x anamorphic adaptor. It will be a much milder effect with a 1.33x squeeze. Whether it can produce nice anamorphic flares also remains to be seen. So maybe not one for JJ Abrams but I bet Peter Jackson is already regretting he didn’t have one of these for those GoPro shots in “The Desolation of Smaug”.

Apparently it will work in the new "SuperView" mode on the GoPro 3+ to allow you to shoot in 16:9 using the full 4:3 sensor in the camera. How much of an advantage that will give you remains to be seen but I have a feeling there will be many creative uses found for the AnamorphX-GP lens.

With 21:9 Televisions starting to appear, it’s possible that 2.39:1 will become even more popular than it is already, so anamorphic seems like it may just grow and grow in popularity. These little GoPro lenses are just going to fly off the shelves I am sure!

For more information check out this great little article on the News Shooter website and this page on the Letus website.