What's it like using a top-end camera (the Sony F65) on a low-budget indie film? 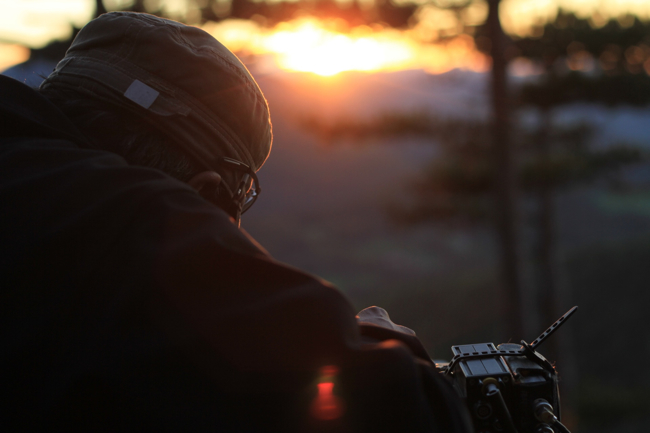 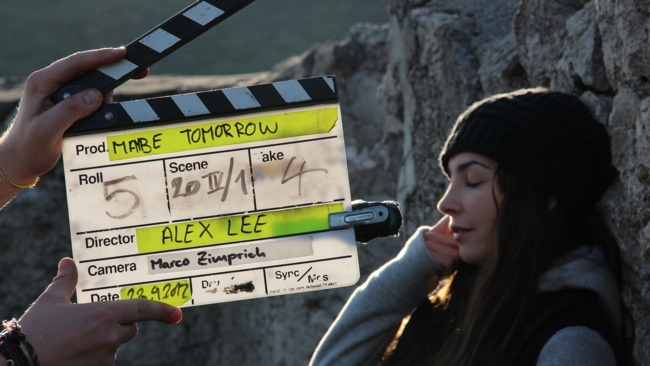 Replay - Although a few years old now, this article highlights the challenges of using a high end camera on low budget shoots: Unlike the vast majority of  independent films, we decided to film “La Vie Nous Appartient” with a high-end camera - in this case, the Sony F65. This might have seemed a somewhat daunting task, considering our more than low budget, and our choice to film all by hand in a rocky terrain. But it was important to us to give our sensitive story the quality it deserved

By the Penny Lane Team

“La Vie Nous Appartient” is a psychological drama about two students, Sarah and Philip, who after meeting online develop a tragic plan to end their lives. They decide to meet and hike into the mountains where they would jump off a cliff together. The film follows them on their journey as they share their stories, thoughts and struggles and find that perhaps neither of them is quite as alone as they had thought.

Filmed in the forests and mountains of the Lower Austrian Alps, “La Vie Nous Appartient” is a probing, but also lighthearted film. Through an up-close view of two individuals, played by the upcoming French actors Alix Bénézech and Florent Arnoult, it looks into enduring issues about family, depression and fulfilment, while also touching upon the unique issues of growing up in the modern world. 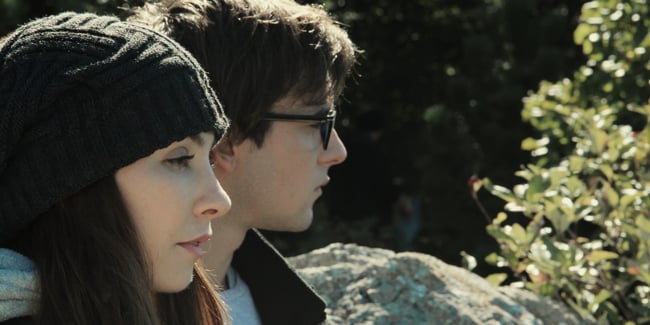 We knew from previous collaborations with the director, Alex K. Lee, that he places strong importance on the look of his films, with a particular emphasis on cinematic camera work. Alex is adamant about the significance of a strong visual implementation, also when story and dialog could easily stand on their own, as was the case in “La Vie Nous Appartient”.

Alex chose a narrative style for this film that is neither documentary nor action-heavy. The mood is dreamy and aesthetic, with a strong focus on the two main characters, but also featuring the breathtaking scenery, which becomes a separate character in the film. Contrary to his usual affinity for dramatic camera movements and quick cuts, Alex chose a deliberately simple camera - hand-held, but steady, allowing the viewer to intimately witness the emotions and perceived reality of the protagonists. The light setting is correspondingly soft and cinematic, but with contrast, almost exclusively using only natural light. The high resolution and special light intensity of the Sony F65, and the cinematic look of the Cooke Movie Lenses make it possible to implement Alex’s vision for Sarah and Philip’s story. 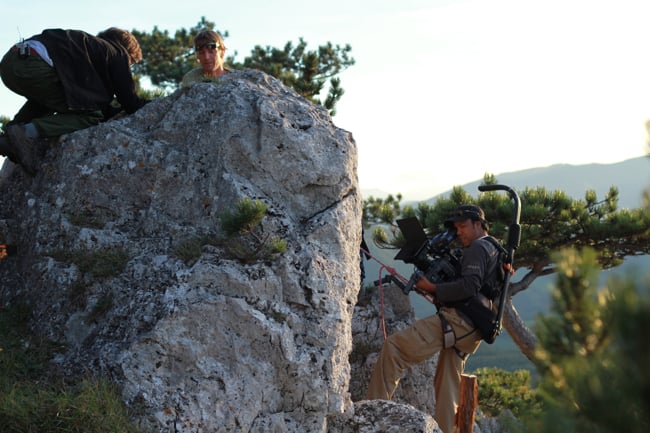 Our choice to use a large high-end camera posed several challenges to various departments. Perhaps the biggest, for the production team in general, was that the entire movie takes place outdoors in a rocky terrain. This not only implied a constant exposure to the elements, but also required some logistical “creativity”, felt also by our camera department.

Throughout the entire shoot, our DOP, Marco Zimprich, who mostly operated the camera himself, needed to move on the uneven ground, using just an Easy Rig when necessary. Capturing some angles also required him to be secured by ropes, hanging from a cliff with the heavy camera on his shoulders. Not so easy, considering that while Alex opted for a hand-held camera, he didn’t want one that was so jerky that it would distract the viewer from the dialog.

The option to use only natural light was also risky, since we would be placed at the mercy of what nature provides. Strong sunlight gives strong contrasts, dark shadows and white surfaces in the same frame. Clouds arriving in the middle of a take bring changes in light that have to be incorporated into the scene.

Our main concern, however, was that the Sony F65 was a new camera at the time (we filmed in 2012), not yet tested in Austria with respect to the workflow both on set and in post-production; Marco was the first cameraman in Austria to use it. The sheer amount of data produced by the camera was particularly overwhelming, especially when also considering dailies, backups, and processing times, all of which we had until then only tested on a much smaller scale. And all this of course raised another question, faced by all indie film producers: how will it affect the budget... 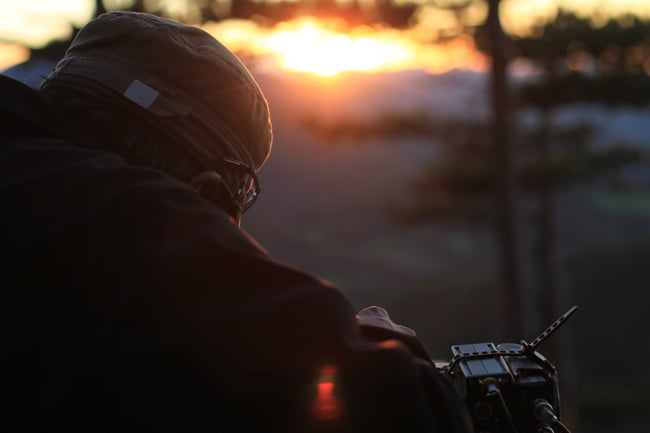 How it worked out

Despite our initial hesitancy, the choice of a hand-held camera proved valuable in the end: We had only 11 days to shoot the entire 90-minute film, so not having to move around tripods or set up tracks (with few exceptions), saved us a lot of time. In addition, the weight of the F65 actually made the picture more stable than if we had used a light DSLR, for example. A smaller camera may have lured us into using other, unusual camera angles, but none that would have supported the two characters in our story. In any case, mountain security on set allowed us to go wherever we wanted, without endangering equipment or team.
The Sony F65 proved an excellent choice for shooting outside in natural light, allowing us to save on the logistics, manpower, and time necessary for setting up lights. In the words of our DOP Marco,

“With the tendency nowadays towards smaller and lighter cameras, we chose to do the opposite, and picked one of the largest camera on the market. Why? Because it gives us a picture that we would otherwise not get. We worked very quickly, with the camera giving us everything we need contrast-wise, the white rocks, shadows and sun - you can move directly from the dark woods into the glaring sun, and all the information is still there.”

This leads us to what was our greatest concern: the untested workflow.

Concerned about the volume of data, we considered filming only in HD (also possible with the F65), since an HD output for the DCP would suffice for a movie like ours - it’s not an action flick, anyway. However, we did film up to 4K on some occasions because we wanted to retain as much information as possible for later colour grading and possible visual effects.

While this meant A LOT OF hard drives, the F65 workflow manages to save on other ends: First of all, it doesn’t require an expensive DIT on set, such as for other cameras; the data wrangler can be a smart, trustworthy assistant, since importing the files is pretty straight forward as soon as the appropriate settings are in place, as is any further processing of the material, both for HD, as well as for 2K or 4K. 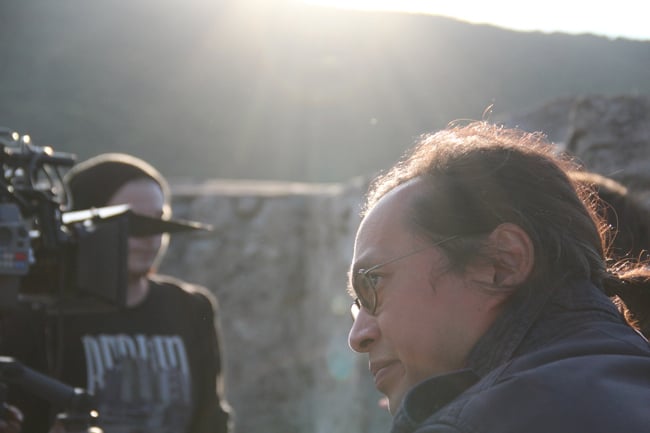 The workflow is simple for HD. A Quicktime plug-in can be downloaded from the Sony website which makes it possible to view the videos immediately. When shooting in 12bit HD, the image gets converted down from 8K to HD, thereby decreasing grain in low light situations, required in some scenes of our film. We edited on Final Cut Pro 7, which worked well, since the clips are compatible and can be edited directly.

For 2K and 4K shots, the workflow is a bit more complicated and requires raw computing power. Via the F65 RAW VIEWER, the footage is first converted into DPX, after which it can be converted by a number of professional softwares. We used Da Vinci Resolve for the colour grading, which will work with the footage natively. The colour grading was particularly rewarding because all the information in the data allows you to move into any direction you may want to go, even for the simple HD material. In general, the F65 material is pleasant to work with, despite the huge amounts of data produced.

Using a high-end camera of any kind will put a strain on the budget. In our case, it was possible due to the goodwill of our DOP and the equipment rental, offering us a special deal. In the end, the greatness of a movie depends on many factors, and while the choice of camera is important, it cannot guarantee the movie’s success, or even it being any good at all. But if you do decide to make room in the budget for a high-end camera, then the F65 is a good choice also for smaller independent films.

We completed “La Vie Nous Appartient” just a few weeks ago, and it looks great! This may of course be somewhat subjective, but we are nevertheless very proud, and also feel reassured by festival responses so far. At the end of November we had the honour of premiering at the Gijón International Film Festival in Spain, next to an amazing selection of films. We screened in front of large adult and teen audiences, both of which received us with thundering applause and great reviews. A truly humbling experience!

You can see Penny Lane's vimeo channel here, and part one of their Behind the Scenes video series is below.