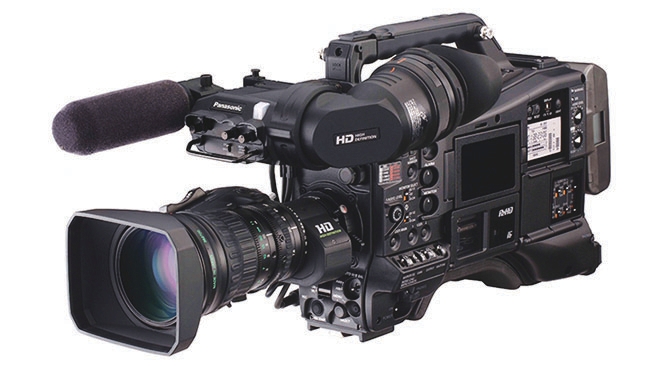 At first glance, the shoulder-mount Panasonic AJ-PX5000G appears to be just another 2/3-inch 3-MOS P2 camera, with full 1080p/i and 720p recording. But what sets this particular camera apart from other Panasonic P2 offerings is the AVC-ULTRA recording capabilities, giving it up to 10-bit, 4:2:2 color sampling, and the bit rate is much lower than similar codecs, while maintaining high quality.

In the age of digital cinema cameras, ranging from the Blackmagic Design line of cameras — the Pocket Cinema Camera, Cinema Camera and Production Camera 4K — up to the RED EPIC with the 6K DRAGON with 9 times the pixels of HD, you may ask yourself why Panasonic, Sony and JVC still produce 3-chip, shoulder-mount or even fixed-lens camcorders.

As we mentioned in our introduction of the Sony PMW-400, these cameras are still very important for those working in the fields of ENG (news, sports), reality TV, documentaries and more.

And since the Panasonic PX5000G shoots 24p at full 1080p HD, don’t discount it as a good camera to shoot movies or episodic TV series. In the dawn of major digital cinema, the heavy hitters in the early- to mid-2000s were Panasonic’s original VariCam (multiple frame rates available at 720p) and Sony’s F900 CineAlta (1080p). Many films and TV shows were shot with these cameras, along with affordable DV and HDV cameras, which helped pave the way towards HDSLRs and modern-day digital cinema cameras.

The big one is AVC-ULTRA, which allows you to record in full HD 1080p at 10-bit, 4:2:2 while at a low bit rate. This is important, because the quality is excellent but the result file sizes aren’t massive, which can quickly fill up a P2 card or external hard drive while you're editing.

Shooters and editors have access to AVC-Proxy, so you can have small file sizes for offline editing, at 3.5 megabits per second, and as low as, according to Panasonic, a shocking 800 kilobits per second! Of course, you can also record 1080/60p in AVC-Intra100 at 10-bit depth.

The price will start at $25,000 USD, which may seem steep, but keep in mind the old VariCam cost about double that without a lens. Since the PX5000G doesn’t ship until March 2014, Panasonic hasn’t indicated if they will sell the shoulder-mount camera with an optional lens package or not, so stay tuned for more details.