Shot Lister's a vital on-set app. We talk to its creator 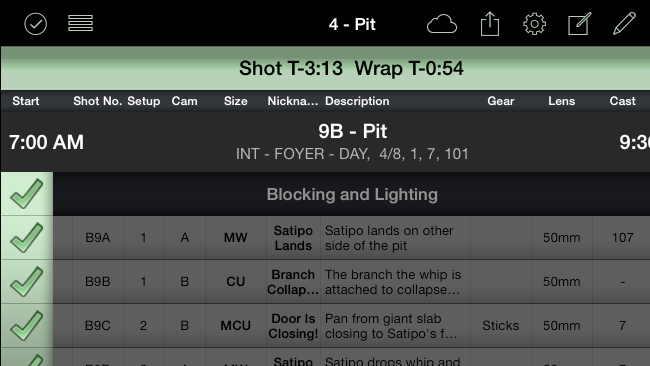 Shotlists are almost the last bastion of pen and paper. Moving this crucial part of movie production to an app brings all sorts of advantages. RedShark talks to Shotlister's creator, Zach Lipovsky

RedShark: How did you go from shooting films in your backyard to directing features for studios?

Zach Lipovsky:  grew up as an actor while also shooting films with my friends. I was a really into computers as well, so as the digital revolution grew up, so did I. By the time I graduated high school my shorts had grown big enough to need crews and actual stories. Soon one of those shorts got me on to a Spielberg reality show called "On The Lot", which was basically American Idol for directors. From there I broke into LA and have been working my way up the first few rungs of the Hollywood ladder.

When I made my first feature for Syfy last year, I couldn't believe that the state of the art for shot listing was to print out a crappy spreadsheet and scribble all over it with a pen as soon the schedule changes. Things never go according to plan on set, so having a piece of paper that can't change is really frustrating. You end up writing in the margins, or writing a new shot list on the back of a crumbled piece of paper.

How did you come up with the idea for the app?

After wrapping a long day, I remember looking at my crumbled shot list and I thought to myself there has to be a better way. I built a quick prototype for Shot Lister in Filemaker, which I could mirror on an my iPad. It made my life so much easier, and a lot of my crew suggested other people might want it as well. So after the film was in the can, I got to work designing the app for iOS.

How did your skills as a filmmaker transition over to designing an app? 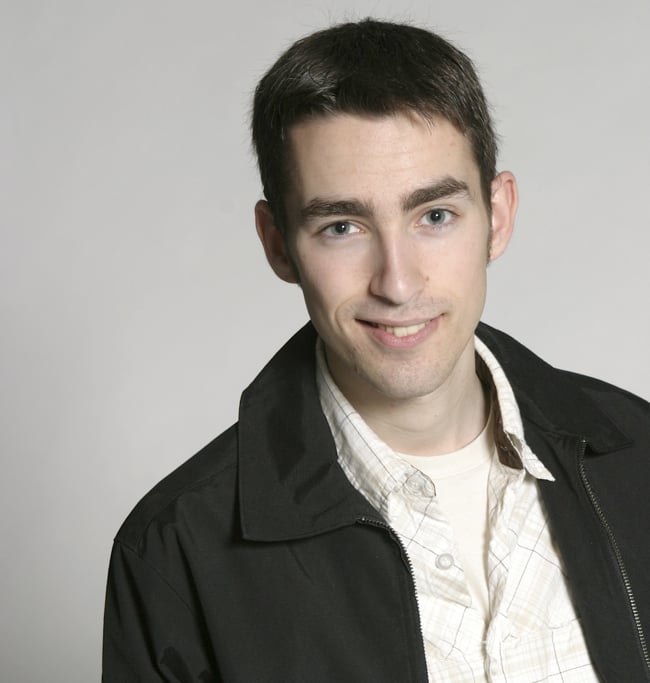 It's a lot of the same work of coming up with a plan, and managing a team to execute it. Instead of giving notes on scripts or sound mix, it's doing bug reports and UI tweaks. I work with a developer to do the coding and I do the designing of the app.  I do find it quite satisfying as it's a much faster and tangible process that I can mostly control. Films are great but take a really long time and involve hundreds of people.

How did you go from idea to an app in the store?

The first step was borrowing some money form my generous mom. Then I went to Craigslist and met with a bunch of different developers until I found the one I liked. We went over the filemaker file and my Photoshop designs then go to work. We brought on a bunch of beta testers and after about 5 months we had the first version ready for the public.

What's your favourite aspect of the App?

I really like how the live mode is very simple yet incredibly powerful. All a filmmaker needs to do is cross off shots or reorder the plan and the app does all the rest of the work. Now you can see how you're doing instantly and see how to get back on track. It really helps on set. I'm also proud of the logo, it took a while to find a simple image that says everything about the app.

What's the reaction from users?

It's fun getting emails from filmmakers in all sorts of different countries. Germany is the biggest non English country, and I have heard from people in Egypt, Abu Dabi and the Philipines. Every one seems to be very thankful that we helped them make their day. I guess you can "lose the light" anywhere in the world.

What what lessons have you learned since you started?

Since we launched the app I've learned a lot about app design. In the same way that watching movies is a different because I also I make them, so too is using other apps. I'm always looking for good design and better UI. I also learned a lot about social marketing and staying in touch with my user base. Most of the updates and features are based on what the community wants. I also rely on them for helping find bugs and keeping the app working smoothly.

What was the hardest part of making the app?

Keeping up to date with what filmmakers want and with the ever changing mobile market is tough. Most of the money from sales goes right back into updating and maintaining the app just to keep up with what is expected. Also it's difficult to make an app that suits lot of different countries and languages. There are a bunch of different shot numbering systems and it's a challenge to design something that works for every countrys' customs and language.

The App has been pretty successful!  What do you attribute this to?

I think the app has been successful because it was built by a filmmaker to solve a problem that all filmmakers face. Also it's specialized enough that there isn't really any room for a lot of competitors so it's been allowed to grow with the full support of the community.

What can we expect to see in future releases of the app? 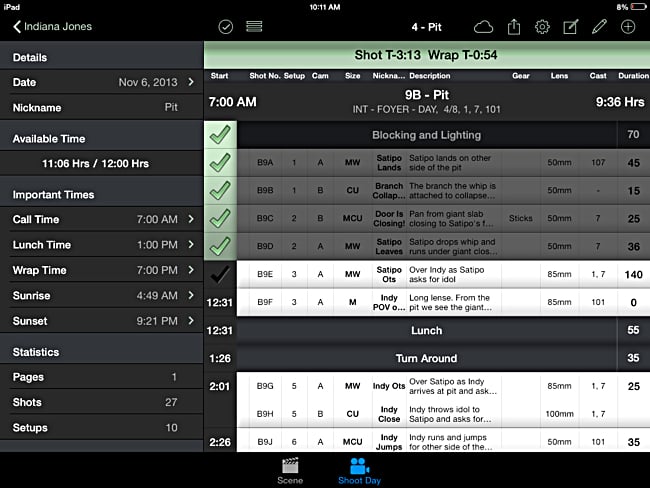 I really want to get a server set up so you can sync the shooting schedule instantly with the entire crew as the shoot day changes. I've seen how much sharing shot lists on set has helped keep everyone prepared, and to build a crew wide live sharing system could be pretty powerful. No matter where in the world you are you could see how the shoot is going.

What other apps do you use on set?

I really rely on Evernote for managing almost everything in my life. And Shot Designer is a really great app for building camera overheads. Photosynth and MagicPlan are great for location scouts.

You're still a filmmaker. What films do you have coming up?

I directed the feature reboot of the Leprechaun franchise with Lionsgate and WWE due out in the spring, and I helped produce a really cool genre feature called "Afflicted" that is doing really on the festival circuit and is due to be released soon by Sony and CBS.

What's next for you?

I'm really looking forward to getting new versions of Shot Lister out there as well as starting on a small time travel film I just finished writing.