Another Astonishing Picture of Saturn 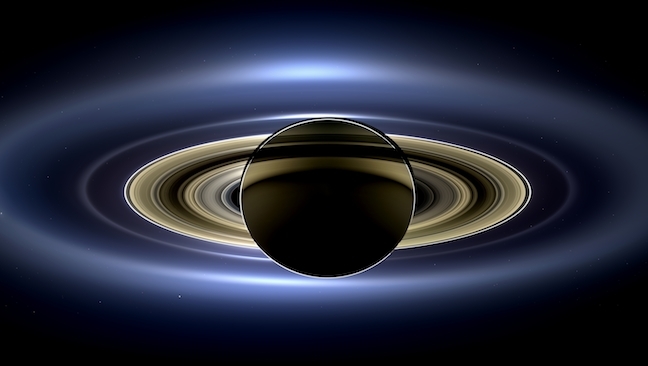 The Cassini-Huygens spacecraft team has finally released its astonishing and much anticipated photo mosaic of the ‘Day The Earth Smiled’ event, stitching together 141 wide-angled images of the planet to produce this natural colour picture, with the Earth a tiny blue speck in the distance.

The Cassini picture further cements Saturn’s reputation as being easily the most photogenic orbital body in the solar system. Images taken using the red, green and blue spectral filters of the wide-angle camera have been combined and mosaiced together to create this natural colour view, with just contrast and dolour enhanced.

This image spans about 404,880 miles (651,591 kilometers) across, with Earth visible in the lower right of the mosaic between the bright blue E ring and the faint but defined G ring. Mars also appears as a faint red dot embedded in the outer edge of the E ring, above and to the left of Venus. Here’s the link to the mammoth 9000 x 3500 original if you want to try spotting them (an annotated version also exists for those who want the shortcut). 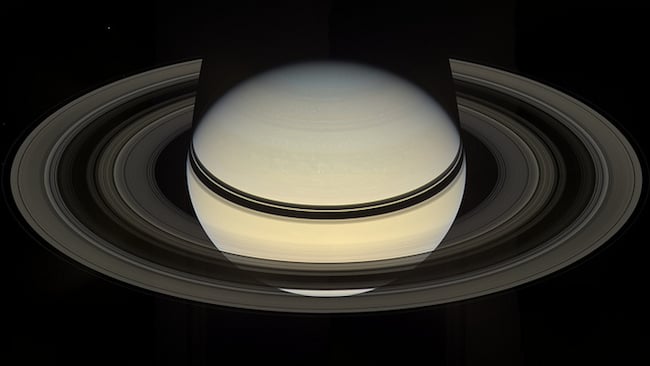 This is of course the second astonishing Saturn pic released in the past month, with Croatian software engineer Gordan Ugarkovic’s own amateur mosaic gathering a huge amount of attention when it appeared online.

Red Shark contacted Mr Ugarkovic for an interview, and received a polite but firm rebuttal.

“I've been working with planetary probe images for years now and never had anything even remotely close to this kind of exposure, even for stuff I personally consider better than this mosaic,” he wrote. “I do this stuff for the (hopefully pretty) images, not fame or recognition.”

Readers though are happily directed to his flickr photo stream for some suitably jaw-dropping images and inspiration at http://www.flickr.com/photos/ugordan/

“The images you see here are (more or less) calibrated images that were released to the Planetary Data System,” he explains, “they are not raw jpeg processed images that immediately appear on the mission website as they're downlinked from the spacecraft. The downside of the PDS is the data releases are delayed about 9 months in order to give the imaging team priority over analyzing data (hey, they built the cameras!). Other than that, the PDS data allow more accurate reconstruction of colours and brightnesses over the histogram-stretched jpeg images.”