How to film without permits 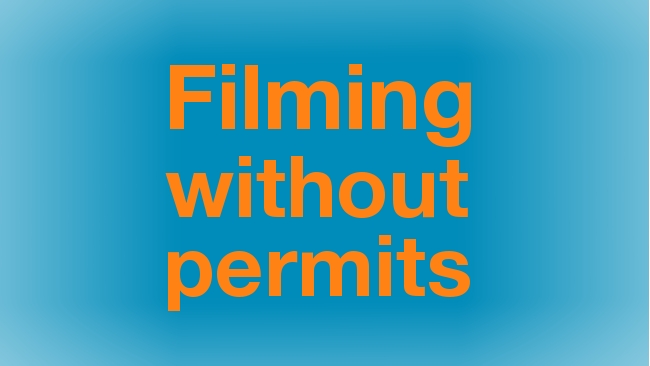 One of the things often neglected by fledging producers is the need to obtain the necessary permits to film in a big city. What do you do if, for whatever reason, you can't get the permits but still need to shoot something?

A few weeks back, RedShark writer and resident technologist, Phil Rhodes, wrote a splendid piece outlining the difficulties in obtaining the proper permission to film in London. Much of the obstacles he described can easily be transferred to other big cities and ring just as true. I know, from experience, that Los Angeles can be a tough, expensive place to permit your production. But sometimes either you or your producer will decide to forgo the proper documentation and go ahead with a shoot anyway. Here are some tips to avoid getting shut down or worse.

Let it be clear: I am not advocating anyone circumventing the usual channels to permit your location. Nor am I advising anyone to break any trespassing laws. And if your production has the budget and staff necessary to obtain and execute the conditions of a location permit, I wholeheartedly recommend doing it the 'right way'.

Whether you permit your locations or not, the first thing you should do is research. If you're permitting properly, this involves coordinating with your local permitting office and discovering the hoops and hurdles that must be cleared to obtain your permit. This can entail hanging doortags over a five-block radius of your location's surrounding neighborhood to inform the public of your presence, the possibility of simulated gunfire, stunts, or anything else the officialdom deems necessary. If you plan to shoot without permits, still do your research. Scout the area for anyone that may be vocal in his-or-her displeasure of your shoot, whether they be security officers, shop owners, busy-bodies, or whomever. Ask your colleagues if anyone has experience shooting in that location or neighborhood and mine them for tips and areas to avoid. A little legwork in the beginning could save you an impromptu troop move and the frantic, last minute search for somewhere else to film.

I know that if I plan to shoot without permits in Los Angeles, it's a gamble. But there are plenty of areas just outside of Los Angeles that are much more lax when it comes to allowing people to shoot in public. Ask yourself if any of your problem locations could be scrapped in favor of a similar location in a more forgiving principality. Again, do research and open yourself up to other possibilities. In some smaller towns, permits may be cheap, easily obtainable, and you may even get some limited, free support from the local brass.

For micro-budget or time-strapped productions, the permit process may be unamenable to your needs. But if you plan on shooting on private property (especially so), it makes sense to obtain a location release, which is just a signed form granting you permission to shoot from the management or owners of a property. This can be a tricky get and a 'no' could derail your shooting plans entirely, but having a location release onhand often assuages the concerns of private security officers. Actual police officers will still ask for your permit, but having a signed location release is definitely better than nothing.

The smaller your production footprint, the greater your chances of completing your filming sans permits. This applies to both your crew and your choice of camera. Enlist a skeleton crew of only essential personnel. Trust me: if you're only shooting without permits one day of your production, it's not the best day to allow visitors to the location. If you have many permit-less days ahead, think about going with the smallest camera and rig possible. If shooting reality or documentary, there are times when the biggest, baddest camera is important, say when you're shooting an interview with a CEO and a fair amount of ego-stroking is in order. Otherwise, be discreet, plan to use a more diminutive camera and use lavs or an onboard shotgun mic via shockmount, as opposed to using a dedicated boom operator. I know, it's akin to blasphemy for film audio professionals, but please keep in mind that this is a special circumstance which is already far from ideal.

Be quick about it

When you don't have the permission to shoot somewhere, time is of the essence. You are constantly under the threat of shutdown, so don't doddle. Gather the crew before you enter the location and explain how the shoot must go. Make sure you walk in prepared, with a clear understanding of what you need in the space. Condense your shot list if possible. Work as quickly as you can while still maintaining the integrity of your work.

Leaving is an art form

If you pull-off your permitless shoot without incident, congratulations! Grab your things and just get out. But let's say you're being asked to leave half-way through your shoot. The first thing you should do is to split a producer off from the production to deal with the problem. Try to separate the security officer or building management from the production, so that your crew can get more of what you need. Whoever deals with the complaint should try to stall as long as possible, even down to searching for a permit that doesn't exist. When that stall runs its course, try to negotiate for time. If you're granted fifteen minutes, that can easily be stretched to thirty without much flack. Instead of walking the equipment back to your transportation, let the management know that you're leaving, but need to bring your van around. At a certain point, all of these tactics will cease to work and you'll have to actualy leave. But hopefully, you can string together just enough extra time at the location to get the footage you need.

Good luck with that...

If you've made up your mind to ignore the usual permitting process, I wish you the best of luck. You're going to need it. But please, I implore you to think about the cost of a shutdown. If you're paying your crew (and I assume you are), you still need to pay them even for days you're shutdown, or you can kiss that crew goodbye. Rental houses won't be sympathetic to your plight either. If the cost of adding production days is more than the cost of obtaining the proper permits, be sensible and permit your production. If your crew is a bunch of film school buddies all working for free, and you're shooting on your own equipment with non-union actors, go forth and shoot dirty. But if it all falls apart, don't blame me. And don't call me for bail money.