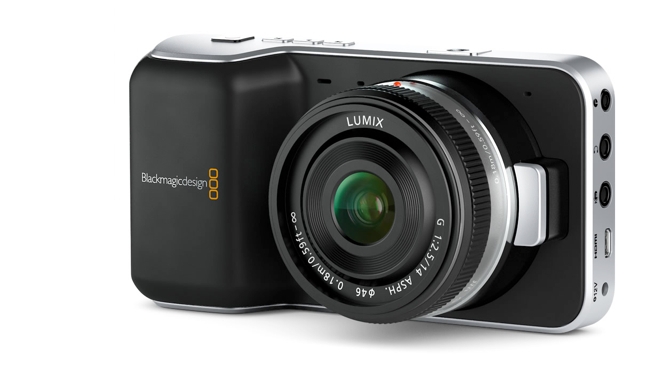 BMPCC in the studio

The BMPCC is about as different from a studio camera as you can get. It's got no remote control, runs off batteries, and it costs $1000 + lens. But what's the picture like in a studio?

We've just recorded the next RedShark TV show, and Blackmagic has sent us a BMPCC to talk about. Once we'd finished the show (we'll tell you when it's online to view), and just before the end-of-show party, with the champagne, celebrities and limos (actually, it was a cup of tea and a long wait on a windy platform for the train back to London) we thought we'd plug the Pocket Cinema Camera into the studio's Newtek Tricaster to see what it could do.

The live output from the BMPCC is micro HDMI. If you're a BMPCC user, you should always have one of these with you! It's probably a good idea to have an HDMI to SDI converter as well. We used one of these to connect to the Tricaster, and as soon as the camera booted up, we had a picture.

We tried it first in "Film Mode" and what we saw was a very sharp and somewhat desaturated picture. This is completely to be expected because you would almost never use the ungraded output from the camera in this mode. We could see the degree of desaturation very easily because we were working on a "virtual" set, with a well-lit green screen behind us.

Then we switched to "Video mode" and the picture immediately became more saturated. Once we'd set the iris, the picture looked very good indeed. It was impressively sharp, with the hairs on my arms clearly and individually visible.

One very noticeable thing was that the output from the camera is progressive. There is still no broadcast standard for progressive video at 1080 resolution, so we're not used to seeing progressive in a studio context, and the difference between the studio's "normal" 1080i and the camera's progressive output was very noticeable, especially when the presenters turned their heads or made some other fast movement.

But once you got used to it, it looked very good indeed. The detail in the picture was outstanding, and we could probably have improved it still further if we'd had time to "play" with it.

So is the BMPCC an ideal studio camera? Of course not. It's not meant to be, and it lacks the basic facilities that you need for a camera in this role. But can it compete on image quality? Absolutely. And for live shows where you need an additional camera, on a tripod or handheld, it seems pretty ideal as a very low cost addition to a studio's toolkit.