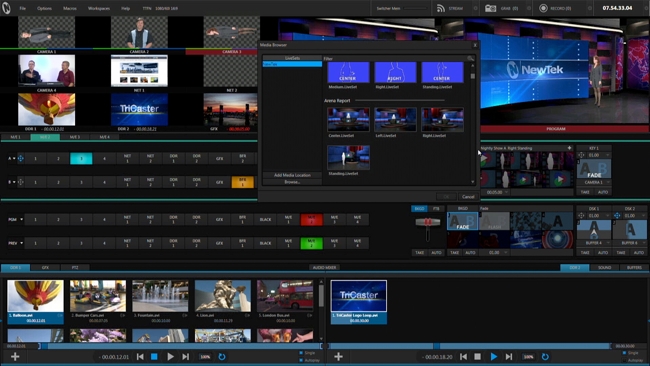 Anyone who has been involved in the rapidly growing world of live internet video streaming will have heard of San Antonio based NewTek. Their TriCaster products are well established and the company has a heritage stretching back to the Video Toaster for the Commodore Amiga (http://en.wikipedia.org/wiki/Video_Toaster) launched in 1990. Mark Johnson, an experienced Tricaster user, reports

The TriCaster allows users to record, stream, project and mix live events. But that simple description does not convey the flexibility and creative potential the systems offer users.

With a range of products from the $6000 entry TriCaster 40 up to the $40,000 flagship TriCaster 8000, they appeal to a wide variety of customers from individual podcasters to more traditional broadcasters.

The biggest difference you see with the new models is a new graphical user interface, or in NewTek jargon, Live Desktop. This is based on the TriCaster 8000 interface and is a much cleaner look which we have found more intuitive to use. There is much more to this than just a new interface: many new features and capabilities have been added. Every user will have their favourite, but the five (I was trying to cut it down to three but just can’t do it!) are:

A complete new audio mixer section which includes much improved routing and the ability to add delays to each input channel – especially useful if feeding Skype callers into the system.

Social Media Integration – connect to your Twitter, YouTube and Facebook accounts as well as FTP and file copy options. You can grab stills and video clips and publish them during an event.

Macros – record and edit macros to automate your workflow.

Animated Buffers – use buffers to run animations rather than having to use a DDR.

Hotspots – you can add multiple hotspots to a chroma keyed shot that will allow triggering of macros when movement is detected.

As a beta tester for the new systems over the last couple of months I have been able to test the TriCaster 860 extensively, try the new interface and features. In summary: there is no way I am going to go back to the previous system (TriCaster 855), it is that big a jump in productivity, capability and usability.