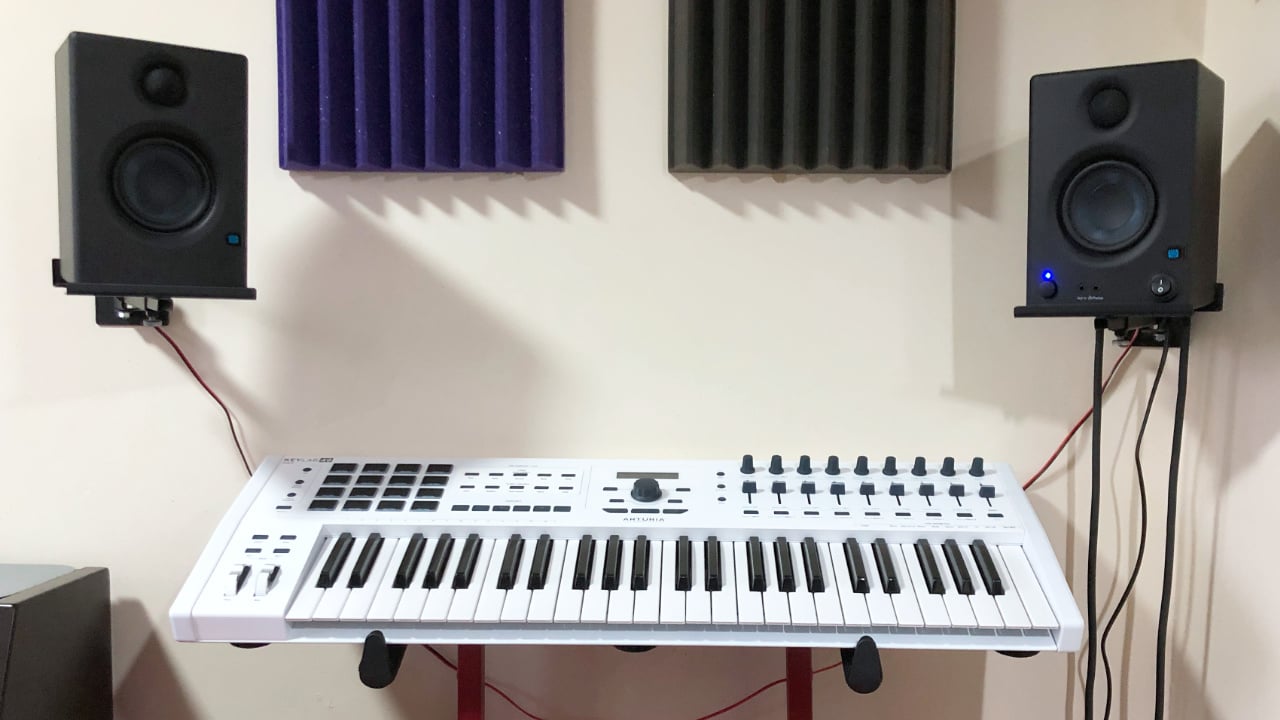 At just £250 for the monitors and sub can they be any good for serious small recording studio monitoring purposes?

When I bought the PreSonus Eris E3.5 and Eris Sub8 recently I didn’t buy them with mixing and critical audio work in mind. Instead, I bought them for monitoring my Nord Lead A1 synthesizer.

The Eris 3.5 monitors are a near field active design, the kind that have just a single amp in one speaker with a supplied umbilical speaker wire sending power to the other monitor. Measuring in at just 21cm x 14cm wide and 16cm deep, they are cute little things, but rugged in build quality. They sport PreSonus’s identifiable blue kevlar bass unit, 3.5-inch, and a 1-inch silk dome tweeter with a protective mesh grill. On the front of the amp-housed monitor there is a volume control and a blue light power indicator, an Aux In and Headphones jack and an on/off switch, which saves fumbling around the back to turn them on/off. 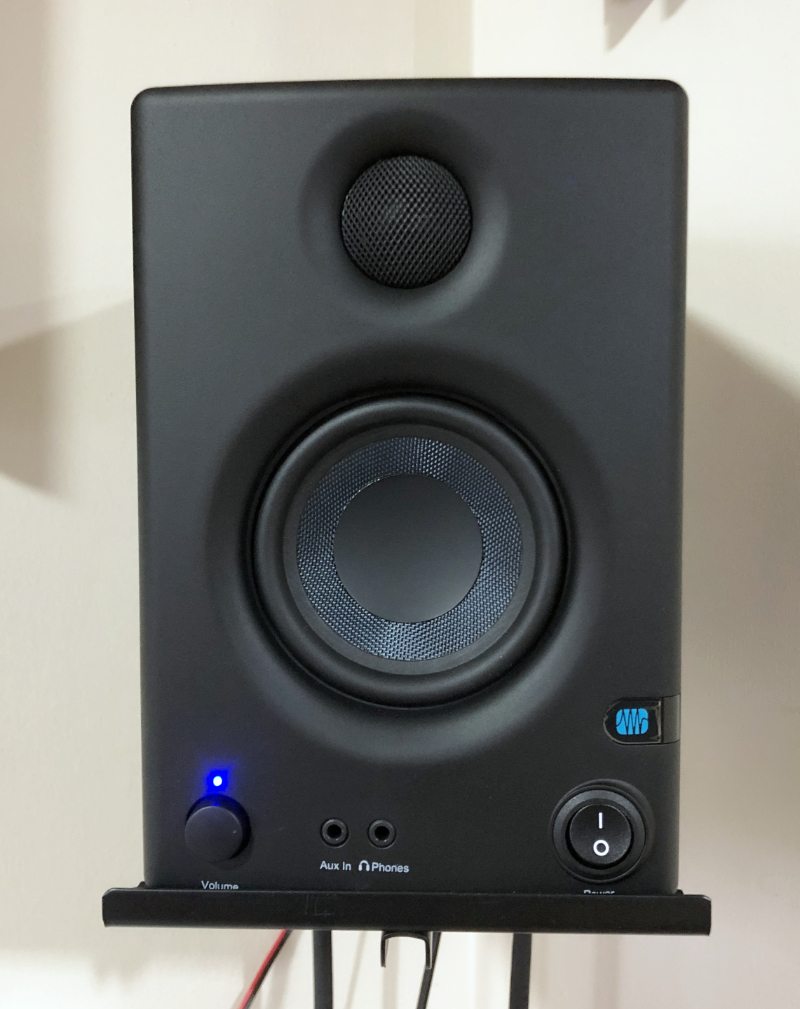 The frequency range is from 80 Hz to 20 kHz so fine up top but not so good for the bass, but most tiny 3.5-inch woofers only go down to about 80 Hz anyway, regardless of the manufacturer. This is why I also bought the Sub8 subwoofer, which goes down to 30 Hz. The Sub8 measures 25cm x 32.5cm and 29.5cm high, which is not huge given it houses an 8-inch woofer. Like the monitors the sub is pretty rugged and feels tough, given the price.

My current home studio set up consists of Logic Pro X on a high specced iMac, an Antelope Audio Discrete 4 audio interface and some Kali IN-8 near field monitors and the PreSonus E3.5 and Sub8 combo are something of a downgrade to the Kali IN-8 monitors.

I’d say the PreSonus E3.5 and Sub8 combo will be fine for the basics of getting your mix levels into the ballpark, even my Kali IN-8’s don’t hit the mark for critical audio work. But, the PreSonus gear is just as good as, if not better than, most other offerings at this low price point. For the record, PreSonus do make larger monitors such as the Eris E5 XT, E7 XT and E8 XT with 5.25, 6.5 and 8-inch woofers respectively and you wouldn’t need a sub for the E7 and E8. 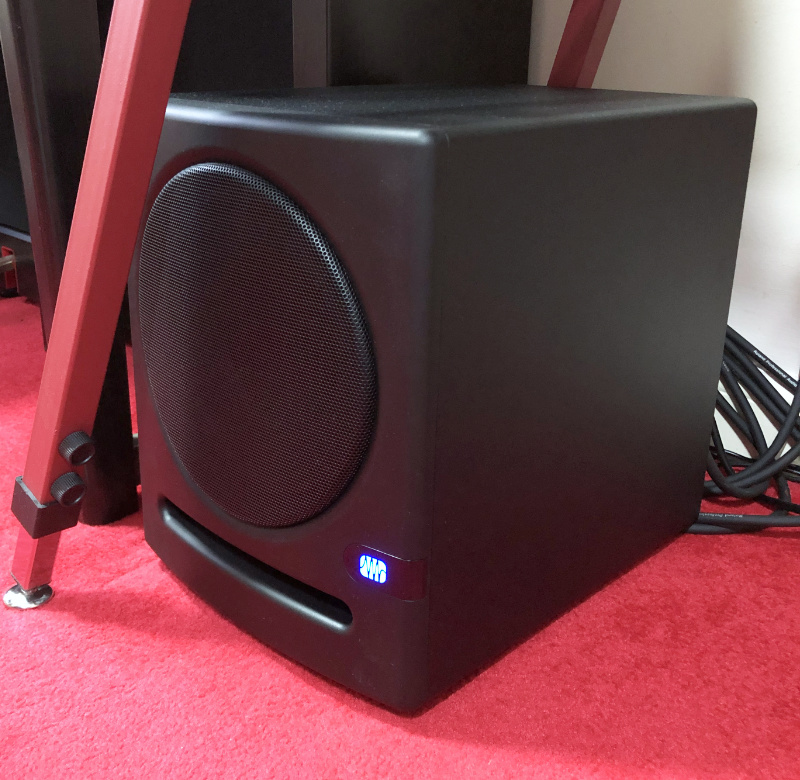 Testing with the synth

Enter my synthesizer, the reason behind my buying the PreSonus sub/monitor combo. For composing on my Nord Lead A1 synth I knew I would not need the most expensive ATC monitors on the planet as there is no critical mixing or mastering going on. As long as I have a decent clear sound with a nice low end that also reproduces the lower mids, upper mids and higher frequencies of the sounds that the A1 produces, along with a bass that slams with those deeper synth basslines and pads, I’d be happy, and the PreSonus E3.5 and Sub8 do this nicely, very nicely in fact. Regardless of the patch (preset) that I loaded up on the Nord synth the PreSonus monitor/sub combo reproduced them faithfully, certainly better than a dedicated keyboard amp would, which are typically a coaxial arrangement designed more to throw sheer volume at an audience from a stage than producing sonic perfection. Given the price of this PreSonus combo they are pretty darn good, particularly for monitoring synthesizers and electric pianos. 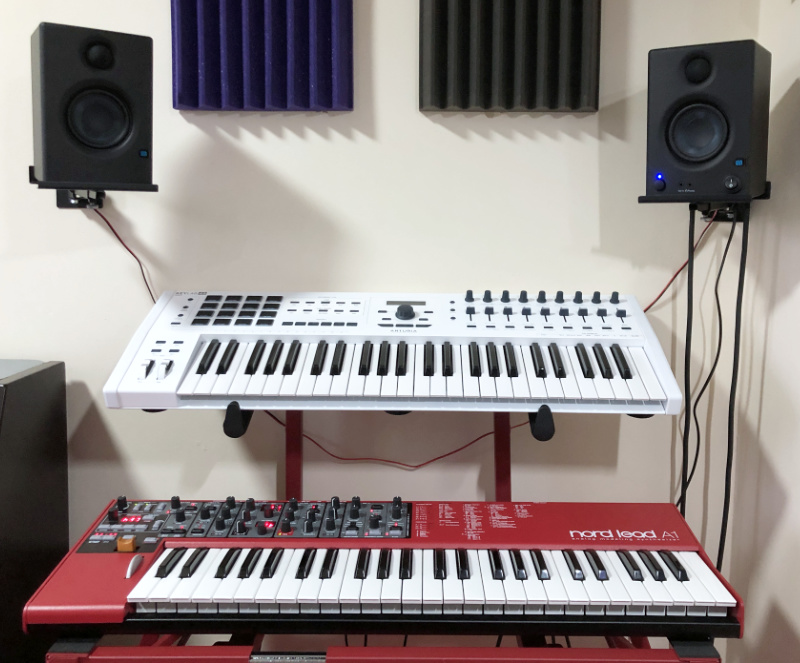 The combo made my Nord sound large and alive with plenty of ground-shaking slam and rumble for the deeper pads and bass sounds, thanks to the Sub8, while the mids were full of lovely ‘synthness’ with the higher frequencies sparkling nicely without being tinnitus-inducing. After playing around with some of the A1’s presets I knocked out Gary Numan’s ‘Are ‘Friends’ Electric?’ and the way the PreSonus monitor/sub combo reproduced my left hand bassline and right hand melody parts brought a massive smile to my face. I could feel and hear everything and given that the monitors seem to project a nice wide stereo field the sound did not change as I moved side to side. The sound encapsulated me perfectly while playing and the PreSonus sound encouraged me to sit there and play for ages.

The Eris E3.5 costs £82 while the Eris Sub8 costs £169. For more details visit the ProSonus website.