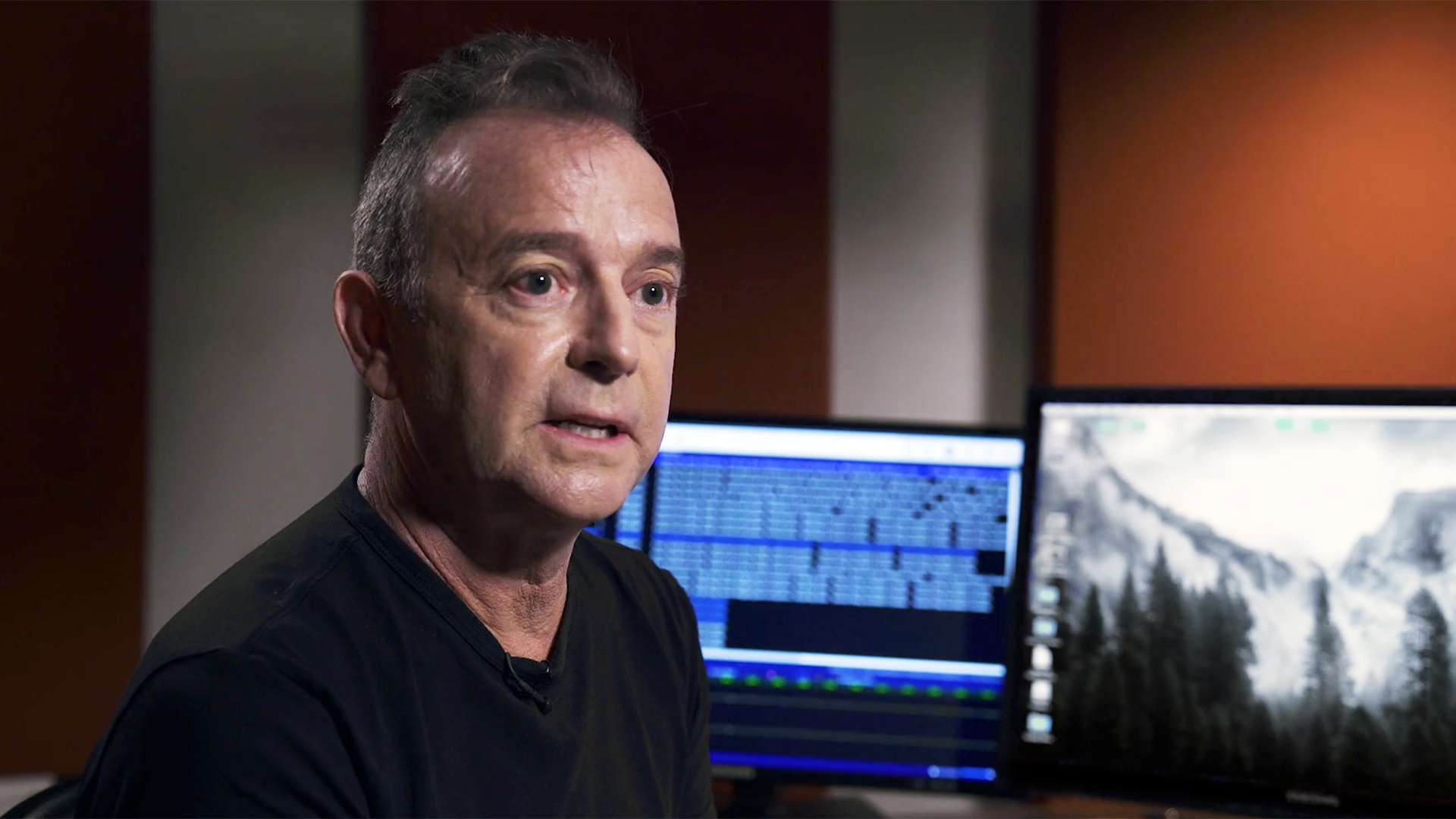 Review Replay: Sound is very much the most under appreciated part of production, whether that's documentary or feature films. But the job of the sound designer is essential. Sound Design with Eugene Gearty will make you appreciate the discipline even if you are in other areas of production.

When you watch any film, any sound that you hear is the result of sound design. True, there are other highly specialised areas such as foley. But it is the sound designer who brings it all together into a seamless sound bed.

One of the most interesting things about sound is that you will never really register good sound when it is there, but you will always register bad sound. This is one big reason why it is under appreciated.

For the low budget producers out there, you will be familiar with making something and adding on sound effects at certain synch points. Be that footsteps or the sound of a door opening etc. But sound design, real sound design, is much, much more involved. And that's where Filmmaker U's online course with Eugene Gearty.

Gearty is a sound designer with pedigree, having worked on over 80 films and counting an Oscar win for sound design for Martin Scorsese's Hugo amongst his achievements.

This is clearly, then, a good source of information when it comes to being taught about the nuances of the role. So let's dive in and look at what the course offers. 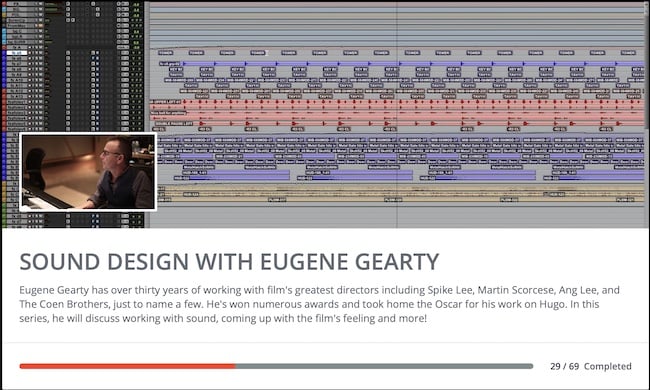 Sound Design with Eugene Gearty takes a very similar structural form to Eric Whipp's colour correction course, which we reviewed earlier this year. Instead of taking the obvious approach of delving into the technicals of specific software, the course takes a much more holistic approach to things.

The course is broken down into small, digestible, video segments. It's a nice setup because it means you can dive in and out without needing to commit to watching one great big long video. From the course contents list it is also easy to find any given segment that you might want to watch again once you have completed it.

Much like the colour correction course, this one begins by looking at how sound design fits into the production as a whole. This includes looking at when the sound designer needs to be involved, and what sort of information they require from the main production in order to work effectively.

Aspects such as communication with the director and musical composer are looked at, as well as the differing approaches that different directors take. Eugene is keen to point out that your job as a sound designer is not to take over the production. Your main aim is to take the production to another level and to assist the director in achieving their overall vision. In other words there is no place for ego when it comes to, for instance, the final mix as one example. If allowing the music to take prominence is what works best for the feel and emotion of the scene then so be it.

This emphasis on communication and team work is emphasised quite strongly in the opening segments of the course, while subsequent ones go into detail about how to prepare and create the building blocks that allow you to keep things organised throughout the project.

For those of you who are interested in the 'fun' part of sound design it would be tempting to just skip past this stuff. But its importance can't be overstated, particularly if you are serious about doing this as a future career. 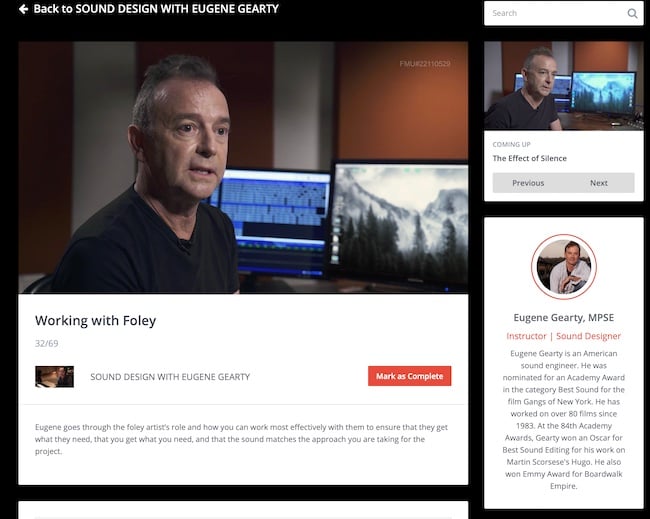 But don't despair, the fun part of sound design is all here, and buy does it make you appreciate what goes into the average feature film! In one particular segment Eugene breaks down a surround sound sequence from The Nutcracker, showing how he built up the layers for a sequence set inside a clock. The detail is really quite incredible.

However it is also a demonstration that each small sound is considered carefully. Thinking about how a character's footsteps are individualised is highlighted in a segment showing how he came up with the comical walking sound for the character of Gustave Dasté in Hugo, and how the individual elements are broken down.

What's important about this is that Eugene goes into his thinking behind each of the elements. It's also good to see how clearly he really enjoys the process. At points he emphasises how he listens to sounds in the real world, and that he tends to hear everything in a 'cinematic' sense, wondering how sounds he hears in everyday life could be broken down into elements.

It is actually quite staggering his knowledge about sound behaviour. In two instances he explains precisely why the background sound of people on a beach is indistinct, and also imparts knowledges such as the fact that cricket sounds at night slow down based upon the temperature. In fact, did you know that you can calculate the air temperature based upon how often they chirp?!

It's this attention to detail that is not only surprising, but also shows how you can take your idea of sound design to a different level. If there's one thing that's clear from this course it's that sheer attention to detail is king. This extends to even simple scenes.

Gearty is quick to point out that often less is more. You shouldn't just pile on sound for the sake of it, and in fact sometimes silence is just as important. He breaks down how powerful silence is and when it could or should be used.

There is too much important information to cover in its entirety within the space of this single review. But I can say that it is highly informative and interesting stuff indeed.

Who is this course for? It is clearly for budding sound designers, quite obviously. But I would say that the content is important enough to be relevant to to everyone from directors to location sound recordists, foley artists, and music composers, simply because it shows how each of those roles will interact with what is an incredibly important part of every production.

But it doesn't just have relevance to feature film production. Even documentary and corporate video can benefit from sound design, and so it would be highly relevant to individual video producers as well.

I've always been a huge proponent of how important sound is as a creative part of production. Not only does this course show how creative and involved the process it is also an important reference for anyone involved in production. For sound enthusiasts it's essential viewing.

Sound Design with Eugene Gearty costs $99, and is well worth every cent.