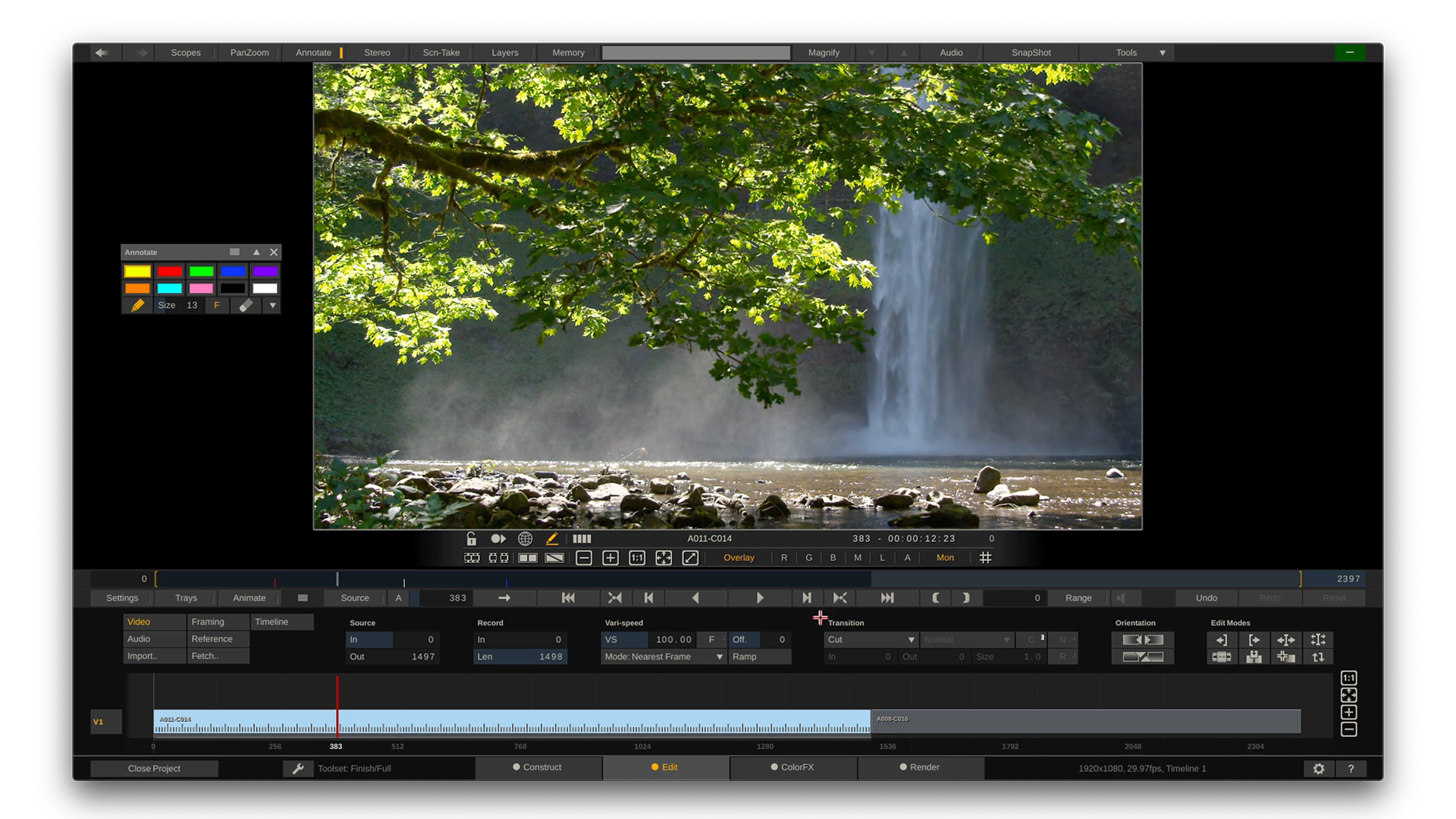 Assimilate Scratch has been updated with some major new features and abilities.

The color grading field has become extremely difficult to compete in since Blackmagic Design dropped entered the market with its extreme price reduction for Resolve Studio. To compete, companies like Assimilate have to bring something both unique and compelling to the table, since they're not able to subsidize their software with vast volumes of hardware sales like Blackmagic does.

Assimilate's Scratch 9 development cycle began with a major under the hood revamp emphasizing performance, and in 9.1 Assimilate emphasized dailies functionality. Taking a page out of the Blender Foundation's version naming, Assimilate is now introducing the modestly named Scratch 9.2.

Scratch makes color management very easy. Select the color space to translate incoming footage into, set the color space for each display, and Scratch determines the correct mapping to use to make the translation, and load a calibration LUT when working with a display that doesn't have LightSpace or CalMan integration.

The color management functionality in Scratch is essentially identical throughout the application, even in LiveLooks and LiveAssist. It's very transparent and although it is still possible to royally hose things up, Scratch makes it very easy to set up a display referred color managed workflow.

Scratch's toolset for dailies is very robust. On a production with synced timecode, it can automatically load and sync the audio, and includes an option for pushing the scene and take information from the audio files into the video files at the same time. When timecode isn't available, the elegant sync tool comes in very handy, and Scratch includes an option for getting the scene and take information from an audio clip when it's added manually.

Scratch also makes it easy to add, update, or remove notes to individual clips, and these are included in reports. New to 9.2 is an annotations tool, making it possible to write notes directly on a clip with a stylus or mouse.

If the DP or colorist provide a LUT for the production, the DIT will want to bake it into all of the dailies. There's an option to select this on the import dialog, along with the option of loading and syncing audio by timecode. New to Scratch 9.2 is the Match Live Looks option. 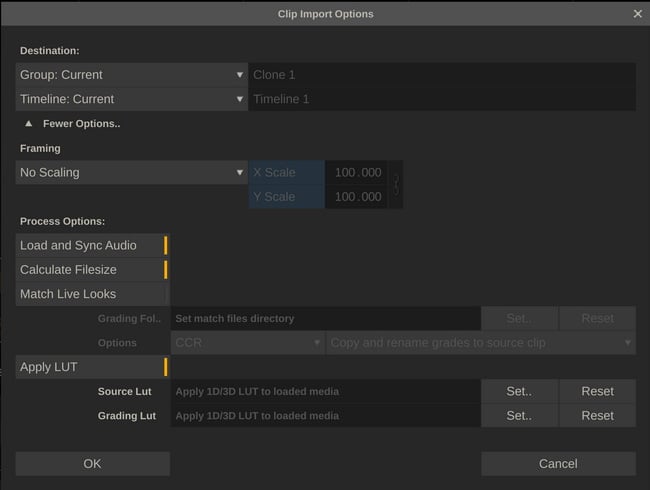 When I was DIT on a small production recently, I was able to start two copies at the same time, and then manually sync the 6K BRAW footage and start the intermediate renders even before the copies finished. Scratch handled this flawlessly. Scratch's clone tool includes checksum verification options, and thanks to Scratch's vaunted I/O subsystem, it's very fast – nearly as fast as Hedge in my experience.

Though Scratch is quite a bit more complicated that tools like Hedge and ShotPut, overall it's simpler to have a single tool that can do archiving, syncing, metadata editing, look management, and DI rendering.

Assimilate has added direct image manipulation to several of its color tools. The curves tool now has a select and an add mode. When both are enabled, clicking on a pixel withing the image will create a point on the curve, and dragging it will move that point. The updated vector tool now has a Nobe inspired interface with similar visual interaction, with the addition of several falloff options for controlling how much of the color space Scratch will drag along with the selected point. These tools are very intuitive, though it's also very easy to push them too far and cause the image to start breaking up. After getting used to them, they're great for finessing color casts out of images, or shifting colors in specific parts of the image very easily.

The five wheel interface now has three wheels instead; the confusing Color-A and Color-B wheels are now Pre- and Post Saturation and implemented with sliders, making their functionality a lot easier to understand. The new color wheels also have gotten a facelift to make them easier to use. The UI includes a “dim” button to tone down their brightness. There's also an indicator on the brightness dials showing which direction they've been adjusted, making it easier to detect small adjustments.

Hiding in the grading LUT panel is a soft clip control with controllable softness plus an RGB option allowing for a soft clipping on individual RGB colors. The soft clipping and grading LUT are independent even though they share a panel, so there's no need to load a LUT in order to use the soft clipping tool. A soft clip is a nice tool to have on its own, but there are times when there's just one channel that needs a soft clip, so the RGB soft clip tool is a great addition.

The animation toolset has been enhanced also. The curves editor includes options to simplify the view, like buttons to show only active animation curves, and there's a new set of filters available to modifiy the curves, including noise and smoothing. For example, after applying noise to add randomness to a virtual camera shake, use the smoothing filter to to smooth out the small jitters if they're excessive.

LiveLooks and LiveAssist are new applications from Assimilate, available as standalone applicatons or as module within Scratch.

LiveLooks supports video I/O modules from AJA, Blackmagic, and BlueFish444 and can also handle a combination of them. It also can read metadata from the SDI feed of cameras by Panasonic, Red, Arri and Canon, supports LUT boxes from Teradek, TV Logic and FSI, and includes the robust Scratch dailies toolset. 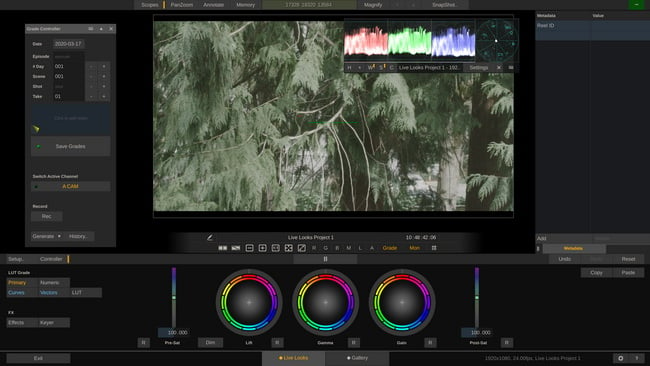 The LiveLooks grading options include two options, one LUT based, and the other CDL based. The CDL based option limits the grading tools to those that can be translated to an ASC CDL and in this mode the color wheels default to CDL wheels. However, there is still an option available to switch the color wheels to CDL sliders and even LGG wheels.

With the LUT based setting the curve and vector tools are available.

There's also an effects panel in LiveLooks. It has grain, diffusion, highlight bloom, and vignette options, all with a fair degree of customizability. There's also a keyer available, to previs composites live. These effects can be sent downstream along with the rest of the workflow as well, so when finishing in Scratch the LiveLooks effects can serve as a starting point for grading.

Even before adding LiveLooks and LiveAssist, Scratch's feature set was very large. There are still a wide array of finishing features that I haven't gotten to, like trays, memories, and composites, not to mention the extensive array of Matchbook shaders available now.