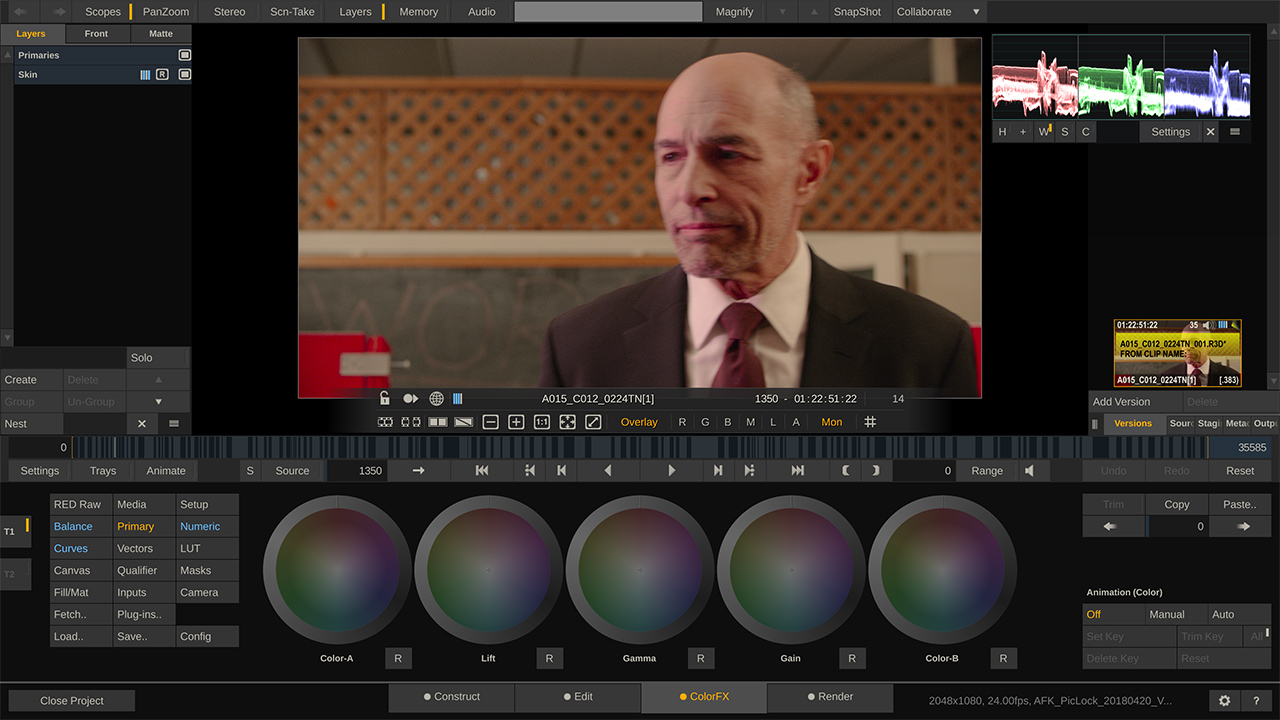 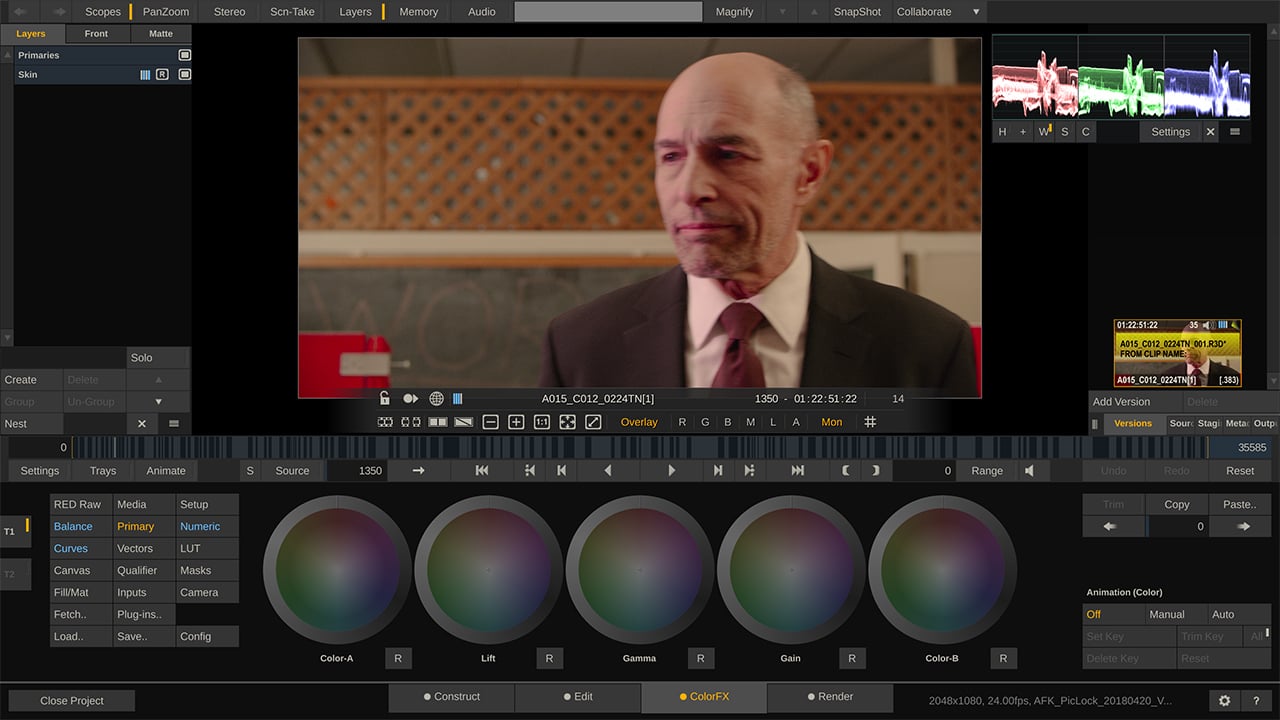 RedShark Review: Assimilate Scratch is not as well known as its more ubiquitous rivals, but Rakesh Malik thinks it is a very powerful piece of software that should certainly be on your radar.

Assimilate is a small company that makes some pretty unusual software. It's primarily designed around colour grading, but it also has some interesting dailies oriented features and a built-in 3D compositing environment. This year, Assimilate plans on releasing Scratch v9, its first update in quite a while.

The biggest changes for the initial v9 release are under the hood. Assimilate has worked hard to improve the I/O subsystem in order to streamline playback.

The UI has gotten an update as well; the most obvious change is the new tabs at the bottom for ingesting footage, editing, colour grading, and delivery.

In Scratch, a timeline is called a Construct. This is where you can import and organise clips. The dailies management features have gotten quite a bit of attention. In addition to an easy interface for editing shot metadata, Scratch makes it easy to add notes to clips with colour codes. Assimilate has now also made it possible to navigate a timeline using those colours. There are now also some extra nodes in the deliver page for generating reports that incorporate those notes. There's also a tool for automatically updating the scene and take for a new clip.

While the Scratch Construct retains the slot view that's so familiar to Scratch users, Constructs are also now timelines, much like in any other online editor. Each clip has a small button on it that when clicked adds a note. Notes can be colour coded in addition to the text, and there are also now customisable predefined notes that a DIT can add with a click of a button.

Scratch's editor is designed mainly around conforming, rather than attempting to be a full-fledged NLE. It has all of the core functions of an NLE, but Scratch isn't designed to compete with the likes of Lightworks and Avid. Assimilate is instead focusing on making Scratch interoperable.

Another major feature available on the edit page is Scratch's excellent audio syncing tool. In the edit page, in the audio section, you can click on "add" with a video clip selected and Scratch will give you a browser that lets you choose an audio file. If the sound is well recorded, all you need to do is locate frame where the clapper makes contact, and click one of the auto-sync buttons in the audio window. One is forward, one is backward, and Scratch scans the waveform in that direction looking for the spike that represents the clapper's strike.

There are also several utilities designed specifically to facilitate DITs' work. One is essentially a set of macros for adding common comments to clips with one click, and one is the option of pushing the metadata from the video clips into the audio clips when they're synced together. If you're working with footage that doesn't have scene and take information in the metadata, you can use the Scene-Take tool to help automate that. It has fields for scene and take, and previous and next clip buttons. If the auto-mode toggle is enabled, it will increment the take and set on the next clip when you click the next clip button, and intelligently restart the take counter when you update the scene and take manually.

The Edit view also includes a timeline like what you'd find in an NLE, though the interface resembles FCPX more than the more conventional track-based timelines in NLEs like Avid and Lightworks. The modes are a bit quirky, but once you understand them, they provide enough editing functionality for conforming. Assimilate is planning to update the editing interface to make it more intuitive, but is not planning to attempt to compete with the dedicated NLEs like Black Magic is.

In spite of the heavy emphasis on the dailies management functionality, Scratch is still a colour grading tool at heart. While Assimilate hasn't added any new tools in the first v9 release, the tools it has are extensive and powerful. It includes the usual suite of tools that you'd find in a colour grading suite like lift, gamma and gain, vectors, curves, and offset/contrast. It Integrates well with a variety of control surfaces, but it also is quite tablet friendly.

For its internal colour space, rather than provide a proprietary one like BaseLight's TrueLight, Scratch provides the colour spaces that the ACES standard defines.

Scratch could use some HDR-optimised tools, but the tools it has work quite well and the company has plans for updates aimed at making the software both more powerful and more user-friendly.

Scratch's tracker is a point tracker. There's not much to say about this, other than that it works well and is very fast.

Assimilate is planning to implement a cloud tracker in upcoming versions.

Scratch is mainly layer-based. Every layer can be configured to either use the previous layer's output or the original clip's image data as its input. Each layer also has both opacity and blend mode controls.

While Scratch doesn't yet have a way to group clips in order to have them share a single grade, it does have memories and trays where a colourist can store colour grades for reference, and those references can be recalled and applied to new clips as well. There is a compare view that allows a colourist to view and compare grades on one clip for matching them.

Scratch has a basic 3D compositor built in. It doesn't have the compositing sophistication of Mistika or Fusion, but it's sophisticated enough for removing boom mics in a shot or an overlooked branded water bottle or a boulder. It's also pretty easy to replace skies in Scratch, which is helped by its stellar keyers.

Under the hood, Scratch's compositing uses a 3D space and a node hierarchy. When Assimilate implements the update that enables users to directly manipulate the node tree, it's going to enable significantly more sophisticated compositing within Scratch.

Scratch's animation tools are easy to use, the only real limitation being that it provides no parameter specific keyframes. Instead, every parameter on the page gets keyframed together. There's no way to keyframe just the red channel of a colour grade, instead, you'd have to keyframe the entire page that includes the parameter that you want to animate. Fortunately, it's very easy to do especially by using the auto keyframing mode, so it doesn't really get in the way all that often, and Assimilate is aware of this limitation and is planning to update the animation system to enable key framing individual channels.

On my Spectre x360, Scratch can play 8K Redcode without the eGPU connected. I was able to grade a short film shot in 8K Redcode while commuting by train, and even rendered the five minute short while travelling. To get Scratch to use my eGPU, I had to select the eGPU as the OpenGL rendering GPU in the nVidia preferences panel and the result was close twice the Rendering throughput.

Scratch's price has decreased dramatically. It's around $700 for a one-year license rental and Assimilate's support has been very good. There's an active Google group where other users and Assimilate staff respond pretty quickly and the Assimilate staff is very good about engaging customers with technical support needs quickly. Assimilate is also paying close attention to customer requests.

While it costs more than Resolve, it doesn't need nearly as much hardware to sing and it has a more robust dailies toolset. It's also the only robust dailies tool available for Windows currently and it includes a powerful and user-friendly colour grading toolset.