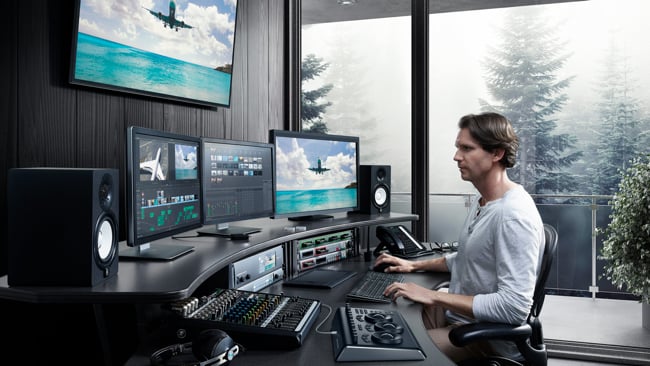 getting ever more capable as it edges towards release...

Resolve 14 gets ever closer to a formal release with the latest, sixth version of its beta software; one which also introduces some new functionality.

Let’s take a more detailed look at the added features.

Audio has been a main focus of each of the public beta versions. Having enabled Fairlight processing several versions ago, Blackmagic is now concentrating on added playback and mixing capabilities. Resolve can now playback audio from nested timelines and compound clips, decode MTS files with AC-3 audio tracks, and can render multiple audio busses from the Deliver page. These features are available on both Windows and Mac platforms. Scrubbing of compressed audio codecs is now useable. In the Edit page, users can now choose between overwrite or layering modes when editing audio. And in the Fairlight page, the option is given to display all clips or only those with audio.

Notable among those assorted fixes and improvements is greater accuracy when using the X-Rite Color Checker Classic chart.

Many of the other fixes listed in a post on the DaVinci Resolve support forum point to a refinement of the program and remediation of bugs reported by users.

The number of improvements as well as the long list of bug fixes could lead one to believe that we should soon see the shipping product release.

As an additional note, the added features of DaVinci Resolve Studio including FX plug-ins, facial recognition tools, 120fps timelines, collaboration tools, 3D capability, motion blur and noise reduction more than justify the $299 price tag. In fact, one could easily contend that they even justified Blackmagic’s original $995 price. While the free version might have sufficient functionality for more casual users, the depth of the program is revealed in the $299 Studio version. And with beta 6 we are one big step closer to a release.