A new pair of control panels for DaVinci Resolve 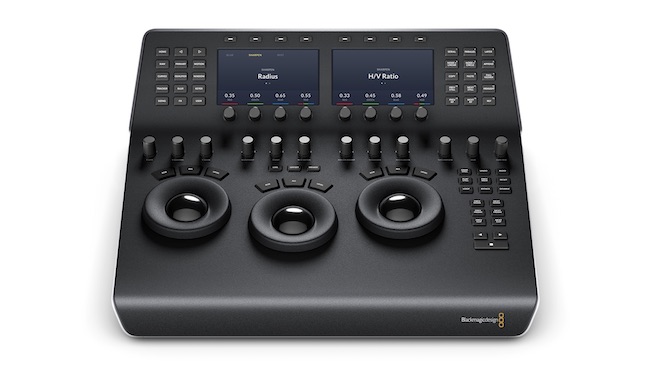 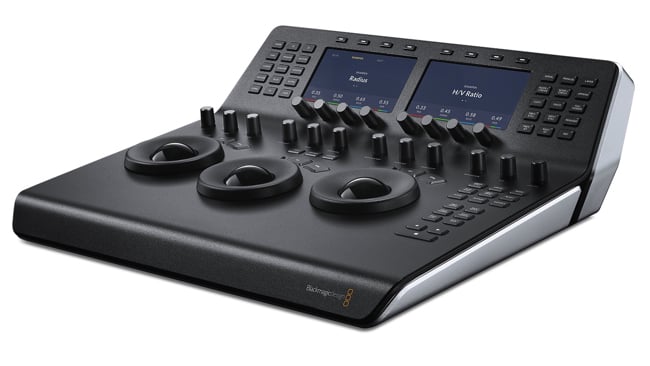 The new mini panel: a lot of control surface for $2995

In his lead up to the product introductions, Blackmagic founder and CEO Grant Petty recapped a bit of Resolve history from its acquisition by Blackmagic to the current direction of the product with its incorporation of editing features. Editors are interacting with the timeline while colorists dig deeply into each individual clip. Editors tend to work with keyboard and mouse while colorists require levels of precision that best lend themselves to control surfaces. While it is of course possible to grade using keyboard and mouse with the on-screen UI, the simultaneous manipulation of multiple parameters is best achieved with the control surface.

There has unquestionably been a market in third party control surfaces and likewise the $30,000 cost of the original Resolve control panel is prohibitive for all but a few users and installations. It then seems a very reasonable approach on Blackmagic’s part to offer controllers scaled to a wider range of user needs and budgets. 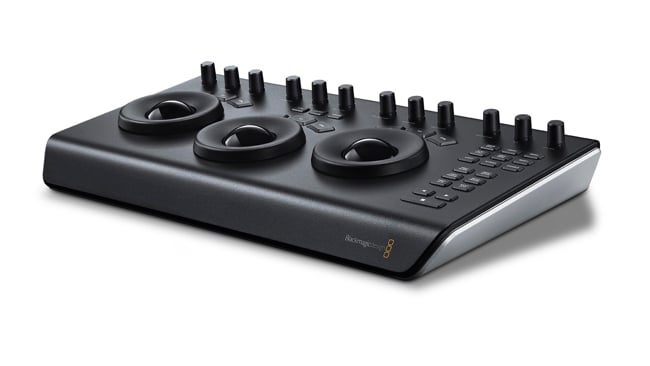 This panel is targeted to editor/colorists who will bounce between editing and color grading. Its small size allows it to be placed contiguous to a keyboard and mouse to move between all three. It is highly portable and both interfaces with the computer and is powered by USB connection. The connection is USB C but Blackmagic provides a USB C to USB 3 converter.

With three trackballs and wheels, this control panel is must suited to primary color correction. With its three trackballs and 18 dedicated correction and transport keys, it closely resembles the primaries color wheel window in Resolve. The 12 knobs across the top correspond to parameters below the color wheels in the app for adjustment of such parameters as contrast, pivot, mid-tone detail, color boost, highlight, saturation, hue and others. A bank of buttons on the right include navigation and transport keys. 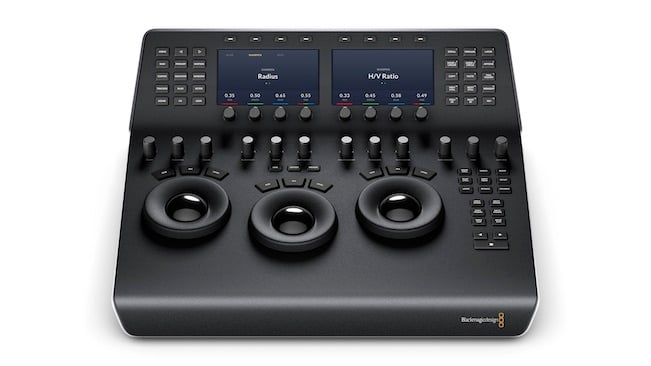 The Mini Panel fills an important gap between the basic primaries grading of the Micro Panel and the complete feature set of the original surface. Its target user is one who requires a dedicated control panel and is engaged primarily in color correction. In addition to the features offered by the Micro, its dual LCD screens and ability to access a number of Resolve menu items provide the user even greater control over looks and faster navigation than the on-screen UI.

Blackmagic envisions this control panel being shared in a facility or even brought on set by virtue of its compact form factor. The company feels confident that any professional colorist will find it suitable for higher end work.

The Mini panel has both USB C and Ethernet interfaces. It adds to the Micro panel the ability to add nodes and navigate the timeline among other features.

Both panels share layout similarities to the Advanced panel allowing easy transition for colorists in both directions.

The Mini and Micro are compatible with both the free and Studio versions of DaVinci Resolve and require a free update to DaVinci Resolve 12.5.5, which was posted immediately following the web event.

Both control surface products are available immediately and are shipping to retailers now.