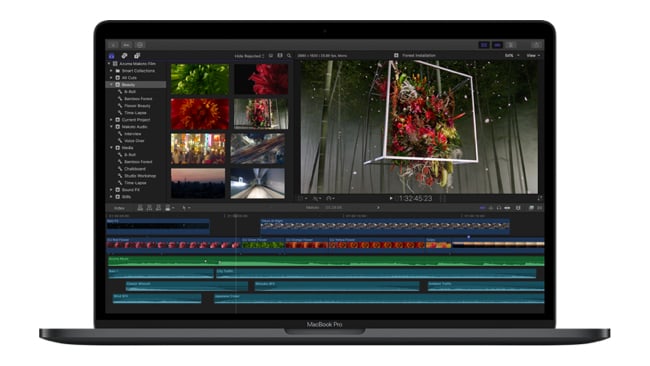 FCPX 10.3 has plenty new going on that is worth investigating

London’s Soho Editors has just produced an event, FCPXWorld, looking into the deep mechanics of FCPX 10.30 and is restaging it in Berlin on Friday 18 November.

Unfortunately, writes Rory Cantwell, Senior Artist ,Soho Editors, it is probably safe to say that it’s only the users that are fully up-to-date and informed about how cool the App has become.

Our own David Shapton attended the London event yesterday and judged it as ‘outstanding’. It was the first full demonstration of FCPX 10.3 in Europe and there will be the same opportunity to see the presentation in Berlin on Friday — and we know we have a lot of readers in Germany.

“You'll be treated to an in-depth demo of not just the new software but the new Macbook Pro with Touch Bar. There's much more to the new high-end laptop than reported in Apple's generic consumer pitch,” he says. “Best of all, you'll actually see how FCPX is now fully integrated with the new Touch Bar. Having seen this, it's tempting to think that this is the biggest innovation we've seen for some time.”

If you'd like to attend (and remember an airline ticket to Berlin from most parts of Europe including the UK is remarkably cheap, and it’s a great city too), just register here.

In the meantime though, back to Rory Cantwell…

“Since the launch of Final Cut Pro X there has been massive changes in the way organisations make content," he writes. "Many editing environments initially stuck with the legacy Apple FCP7 software for a long time, despite it being 32bit and increasingly struggling to deal with modern camera codecs. Eventually however, many migrated to Adobe Premiere, mainly, it would seem, because Premiere did a great job of emulating the functionality and workflow of that legacy Apple product and offered solid round-tripping functionality to Photoshop, After Effects and Cinema 4D.

“Others took a different course and moved on to Avid, attracted by its robust reputation for delivering polished product every time and the depth of high-calibre talent available to operate it. The hardware was more expensive, the software a bit more idiosyncratic but the results were always good.

“The wild card, and the one that made all the other manufacturers think long and hard about their marketing and pricing models, is Blackmagic Design’s Resolve software. Since being bought by BMD, Resolve has been reinvented to now include a similar editing functionality to Premiere or indeed, the legal FCP7 product that Apple replaced with Final Cut Pro X.

“What’s interesting is that all of these alternatives to Final Cut Pro X are pretty similar in the way they operate, which is both a strength and a weakness. From a talent perspective, their strength is actually their interchangeability. Anyone conversant with a particular manufacturers shortcuts and interface will find it relatively painless to cross over to another manufacturers toolset, (with a bit of cross-over training from Soho Editors Training) Their weakness is that they have locked into a admin-heavy interface and workflow, where lots of the operators time is spent modifying the interface of the software, even to do simple things like add a clip to the timeline, without overwriting a clip that just happens to be in the same track, that they were last targeting.

“When Final Cut Pro X came out, the fact that it had removed my need to control and administrate these problems was both a total pleasure, freeing my mental faculties up to be concentrating on more creative problems, and slightly unnerving, because I had spent so much time on the other apps trying to keep it controlled and neatly organised, it felt a bit alien not having to worry anymore.

“Once past the shallow learning curve to get to know how Final Cut Pro X uniquely approaches every editing problem, I found it a total joy to use and now, with the latest up-grade, it has every professional criteria ticked.

“A legitimate question is, why did Apple do it? Why did they drop FCP7 and head in a completely different direction with Final Cut Pro X? I believe there are two main reasons and with 10.3 the evidence to back up my assertions is there for all to see. Firstly, as I said, by looking at every editing operation with a clean slate and fresh eyes, Apple could make Final Cut Pro X the fastest editor ever invented. Essentially Final Cut Pro X requires less operations to achieve the same creative result.

“Secondly, When making Final Cut Pro X, Apple took the opportunity to make it possible within the software to exploit the huge power of metadata, Information flowing everywhere in the digital age that can never be exploited to the same level by competitor softwares.

“In the latest Final Cut Pro X 10.3 however this metadata information is incredibly powerful and exploitable. Take the simple function of being able to tag audio elements as they are being imported as either Dialogue, Music or effects. Once the Final Cut Pro X operator does this, they are empowered to be able to totally redesign their interface and focus on exactly what they need to focus on instantly. Something that is truly impossible for competitors to emulate. Let’s face it. The ideas that first informed and created their software were had before there was any ability to add vast amounts of metadata, never mind being able to exploit its power and potential to make life easier and more creative."

If you'd like to attend Friday's event, just register here.