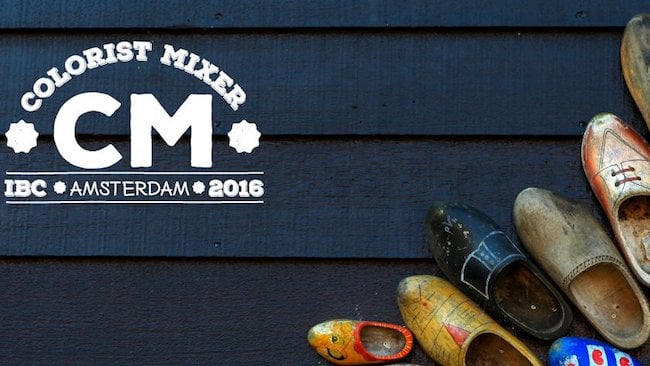 Clogging on: The Colorist Society International launched at IBC2016

With the grand aim of building “a close alliance to promote both artistic pre-eminence and scientific achievement in the creative art of colour”, CSI made its debut at this year’s IBC Colorist Mixer.

As the sun shone in Amsterdam a week or so ago week, a notoriously grumpy DoP remarked that ‘it’s a good time to be a cinematographer’. He clearly approved of the fare on display. I agree, there’s a sense that the tools are maturing nicely, but would argue that that’s not just for cinematographers. For those involved with the fast-expanding art & science of colour as applied to the moving image, the sun also shines.

The evolution of digital cinema has created a new synergy between colorists and the sister crafts in the image chain. Cinematography, art dept., DIT, editorial, are all working with fluid boundaries, in turn requiring ‘a precision and clarity in terminology’ that supports the communication of intent and fosters tighter collaboration. In colorist circles, work is going on to deploy this specialist knowledge and best practice across the disciplines.

At the IBC Colorist Mixer, by the banks of the Keizersgracht, I caught up with Jim Wicks, co-founder (with Kevin Shaw) of the Colorist Society International (CSI), to hear at first hand the elevator pitch.

I started by asking why it’s important to promote CSI accreditation.

“CSI is more like the ASC for Cinematographers or ACE for editors,” said Jim. “It’s the first professional society to represent motion picture and television colorists in the film and digital entertainment industry, and aims to promote the creative art and science of color grading, restoration, and finishing. Our aim, and what we are doing here tonight at the Mixer, is to bring people together — those colour artists who want to advance the prestige and dignity of the profession — and build a close alliance to promote both artistic pre-eminence and scientific achievement in the creative art of colour.”

Jim is a digital colorist who also colour restores classic 35mm motion pictures. His weapon of choice is DaVinci Resolve, and he is one half of the long running Tao of Color newsletter with colleague and close friend Patrick Inhofer. The Mixer was stacked full of colorist’s colorists like Jim: sizzle-reels looped on the projector screen (which included some tent-pole features as well as commercials and indie projects). The room tacitly shares a sense that ‘I’m with my people’ and food, ale and a good time was had by all. But it’s not an ideal venue for a detailed interview, so after IBC I talked to Jim by Skype from his studio in South Florida and asked for his personal take away from the show. The conversation quickly turned to the tools of the trade showcased at the RAI.

Jim: “HDR. It’s significant. Whether or not a client ever brings you an HDR project, I think you owe it to yourself to learn HDR, understand it, and experience how to use it.”

“I had the opportunity to get a one on one demo from Pablo Garcia, C.S.I. We met up at the Colorist Mixer. After catching up and having a pint, he told me I really needed to stop by the Sony booth the next day. Pablo is Sony’s 4K Workflow Specialist in Europe. So when Pablo speaks, people listen.

“Next day, as promised, Pablo showed me his 4K HDR workflow with footage from Sony’s F65 on DaVinci Resolve. Brilliant! The colours seemed more realistic, if you get my meaning. The increased contrast seemed to allow for incredible precision in the shadows that we didn’t have before. More detail, more colour, more contrast.

“I also spent time with Peter Chamberlain at the Blackmagic Design booth, learning about the new updates in DaVinci Resolve 12.5.2, including better Fusion integration and colour space tagging for QuickTime export. Alexa Maza, FlimLight’s Head of Marketing, talked with me about the new colour space in Baselight 5.0 that lets the colorist grade in a natural, photographic way. Lucy Seaborne, SAM’s Senior Application Specialist demonstrated Quantel Rio’s support for Panavision DXL. And Patrick Morgan, Digital Vision’s Product Manager, is always keen to show off Nucoda’s power, including new restoration toolsets built in for that quick fix.

“Overall, my takeaway was about the diversity of the colorist’s toolsets at our disposal now. The ability to do more and stretch creatively is improving and growing. So, you asked my take on the breaking news from IBC 2016. Simply put: it’s never been a better time to be a colorist.”

I agree totally that the treasure chest is full. Shows like IBC are a great place to release the inner gear-junkie but it’s also a pertinent time to remember that these tools are dumb until they are in the hands of talent like Jim and the other CSI members.

So who can join CSI? Full Membership is reserved for professional colorists, editor/colorists, DITs, telecine operators, color timers, DI finishers, restoration artists and colour scientists. There are separate categories for Friends of CSI (companies that work with the core membership), Alliance Members (for professionals with a vested interest in the colorist profession, such as cinematographers, directors, producers), and Associate Members (for students and newcomers). Each level has different privileges.

NAB may be the ‘tick’ in the manufacturers’ market cadence of disruptive launches, but that means the ‘tock’ of IBC is a more sober affair, allowing the Nevada dust time to settle whilst the industry takes a bearing on the direction of flow. One of the fastest currents is VR and 360 Filmmaking, and ‘Immersive’ creates new challenges for us all that will, can, only be solved by collaboration. My takeaway from IBC? We are all guardians of the image.

For me, like all creatives of a certain vintage, I’ve been ‘on tour’: collecting skills from different crafts and applying them in new situations, building up the chops on the job; always learning and open to new ways of seeing, but mostly driven by the blind necessity of the next gig. I mention this because my IBC2016 Rijksmuseum visit brought the strands of this journey together; I am a painter. I studied Fine Art and despite having visited the museum many times before, this time (after a gap of 20 years) I found myself, with a jolt of realisation, reading the familiar paintings and gallery environment from the perspective of a colorist and lenser. It isn’t often you get the opportunity to calibrate your own arc of growth, to see the multiple layers that constitute your gestalt of skills. It was a remarkable experience.

We are a fortunate few: the planets align and your organic skill-set resonates naturally with a certain role. Colorist Society International recognizes the layers and complexity of backgrounds in our industry and is working to build a community from this diversity. To find out more about the CSI visit www.coloristsociety.com