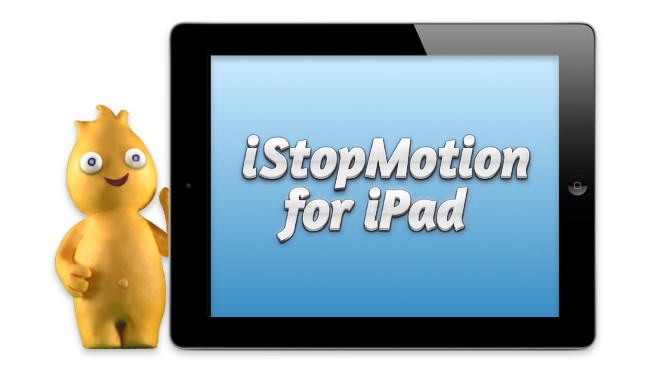 We review the iStopMotion animation app, a software package that brings some pro animation features to iPads and iPhones.

The technique of stop-motion animation is almost as old as the craft of animation itself. Championed in the UK by the likes of Aardman Animation, and seeing a resurgence with LAIKA’s recent work on BoxTrolls and ParaNorman, there’s a wide range of stop-motion software available. We had a look at the latest release of iStopMotion from Boinx Software to see how well it performed.

Once you’ve completed installation, you’re offered a number of presets for setting up your first clip, and it’s here that iStopMotion first reveals its hobbyist level – the vast majority of these presets are low-res, intended for final output and viewing on iPhones and iPads. There are two options for HD, 720HD and 1080HD, and you can set your frame rate and aspect ratio separately, but the focus on low-res presets is an indication of the intended audience for the product.

In terms of workflow, iStopMotion comes with a number of different options for creating your images – you can use the in-built camera on your Mac, connect wirelessly to an iPhone using a custom app you download separately or use a wired solution from a DSLR or other camera. A note about the wireless option: I could not get this to work initially, either on my home wifi network or using a computer-to-computer network. In both cases, the software failed to recognise that I had a device with the app running (this has been fixed in the beta of the next iStopMotion release).

Once you have your camera working, you are shown a live preview of the image as the camera sees it on the main display and can then capture this frame using the UI or by using the hot keys. Capturing frames is very straightforward once you get the feel for it. The onion-skinning in the live preview is very useful (onion skinning shows a blend of the previous image and the live preview, allowing you to judge how far you’ve moved your puppet before capturing the next frame). Some of these options can take a little bit of digging, but once I’d got a grip of the various hot keys, I was able to get into the flow of animating and iStopMotion mainly let me get on with it, without too much interference. 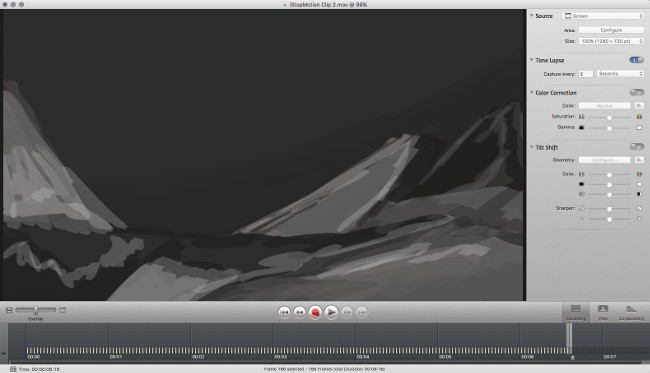 You can bring in sound files to animate to and the software also offers you a number of compositing options, allowing you to overlay images on top-of or behind your captured frames. The built-in options provided feel very gimmicky – capture images of yourself in a cartoon fish tank or surrounded by red velvet curtains, for example – but the functionality is there to allow you to combine still 2D images with captured images to create separate backgrounds for your scenes digitally rather than by building sets. There’s also some very basic chromakey implementation, giving the option of creating characters in front of green screens and compositing them into other scenes without leaving the software. Again, for someone looking to make videos in their spare time, these options are great – but for full production, these are superfluous additions that aren’t required. You would aim to composite in a package like After Effects, to give you greater control, than work within the one piece of software.

iStopMotion also has built-in screen capture and comes with time-lapse tools in the software. These work well in the background. I did find getting the screen capture area set-up correctly to be rather tricky – without a second monitor to drag iStopMotion on to, working back and forth between it and the drawing package of choice would have been very awkward. That said, once I had things in place, I was able to paint away in Photoshop without interference or issue. However, when trying to export the resulting time-lapse as a GIF, it seemed to fail at the final moment of export, refusing to create a final file (this has also been fixed in the beta for the upcoming release).

The range of the tools on offer means it’s trying to fit a number of different niches all within the same package and, while it does a decent job of meeting those demands, it simplifies things to the point where you lose a degree of control. The interface makes it feel more like an iMovie product rather than a professional level tool like Final Cut or After Effects and it tucks away things I’d like to have direct access to, such as the number of frames I capture when clicking the record button. Another issue with iStopMotion was the lack of precise editing tools in the timeline; while you can cut, copy, paste, select multiple images and so on, the timeline is fiddly to work with and lacks fine control. It also has a scaling effect on the frame you hover the mouse over that I found aggravating after I’d spent more time working in the software.

I’d like to see a proper dope sheet, giving me more control over blocks of frames and easier editing tools. I’d also like to see a move away from the iMovie interface and have something more streamlined, with less wasted screen real-estate and easier access to some of the critical tools –  such as the onion-skinning level – and tools that would allow you to plan shots out, such as an x-sheet or motion path tools.

I asked the Boinx team about the issues with WiFi connectivity and they directed me to download their most recent betas. With the latest version, I was able to connect seamlessly to the iPhone app and use it without difficulty, so it certainly appears that a fix is on the way for that particular problem. I was also able to export as a GIF without issue.

Should you buy it? It depends on what you’re intending to do. iStopMotion covers a range of different areas and does so reasonably well. For professional work, there are bigger budget competitors more laser-focused on pure stop-motion animation. However, if you’re a hobbyist with a DSLR looking to create some simple animations or a digital artist capturing your workflow, iStopMotion should serve you admirably well.