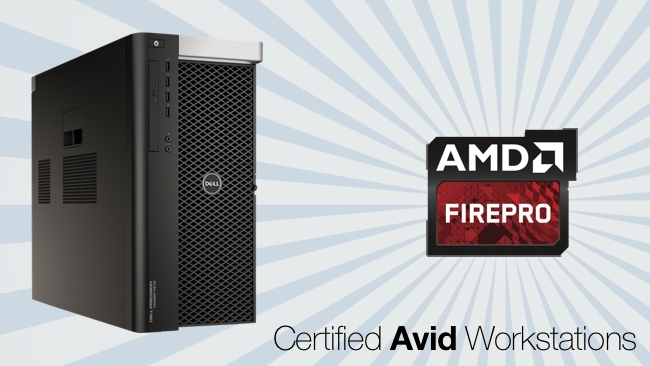 Dell workstations with graphics powered by AMD FIREPRO chipsets have been approved for use with Avid Media Composer. Here's why this is a very good thing.

Modern PC workstations are incredibly powerful and amazing value for money. Working in real time with 4K video would have seemed like science fiction ten years ago.

While it’s tempting to think that you can build your own powerful PC for less money than a ready-made one - and sometimes you can - there are pitfalls. And you don’t want pitfalls when your business or your reputation depends on your computer.

Even if you buy a well-known make with a stellar reputation, it doesn’t mean that it’s going to work with your software. Some of the most powerful editing and grading software is very picky about what it runs on. You could even end up with a brick-wall problem where nobody (the hardware maker, the software designer, the reseller etc) is prepared to take responsibility or even to help.

Specialist software is picky for a reason. It doesn’t just randomly decide that it doesn’t like a given combination of components. It actively requires certain parts that it has been designed around and optimised to work with. If these parts aren’t present, then you can either expect very degraded performance, or for it not to work at all, quitting back to the Windows desktop after a terse error message.

And it’s not just a question of “will it work at all?” When a system is set up properly with the correctly specified and supported parts, you can get phenomenal performance.

Video and editing post production workstations place huge demands on the CPU and increasingly so with ever higher video resolutions and bit depths. This is serious stuff. 4K has four times HDs number of pixels; 8K has sixteen. And that’s for the same frame rate. Higher resolutions are increasingly demanding higher frame rates, so you could easily find yourself working with eight or even sixty four times the data rates you’re used to.

Nowadays, GPUs pick up from where the CPU takes off. It's GPUs that do today's heavy lifting.

It’s this scenario that has brought Avid, AMD and Dell together to create a range of application-certified workstations. Essentially, when you buy them, you know they’re going to work with your Avid applications. There are so many advantages to this approach. Sheer performance is the first one. By combining Avid’s resolution-independent Media Composer NLE software with AMD’s FirePro high-end professional graphics cards, traditional bottlenecks between the CPU and GPU are reduced thanks to the full 32GB/S bandwidth of PCIe3. The whole system runs faster, and better.

Resolution independence is at the core of Avid Media Composer 8.4. And to make the most of it, it’s essential to use a dedicated, fast, professional GPU. The AMD FirePro W8100 GPU absolutely flies at resolutions all the way up to 8K. To achieve this level of performance it has 2560 stream processors, 8GB GDDR5 GPU memory and 320 GB/s bandwidth, as well as 4.2 teraflops of pure GPU performance.

Dell Precision 7810 and 7910 Tower Workstations are fully configured PCs guaranteed to work with Avid Media Composer 8.4. You can buy these systems fully confident that if there’s a problem, it can and will be fixed. No-one’s going to say “sorry, that’s the other guys’ fault!”.

AMD stays consistently on the affordable cutting edge of GPU technology and right at the core of the content creation industry. Apple’s Mac Pro brought the power of AMD FirePro graphics cards to the attention of media professionals in the biggest possible way. But now you can buy PC workstations with similar or better performance for less. What’s more, they’re fully supported by Avid, Dell and AMD and they’re more configurable and upgradable for the future.

To find our more about Dell Workstations that use AMD FirePro GPUs, click here.