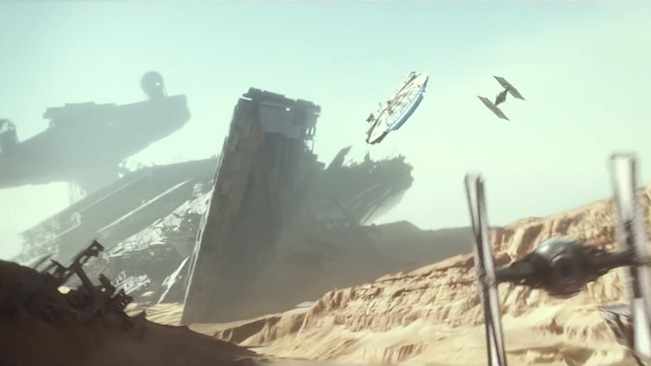 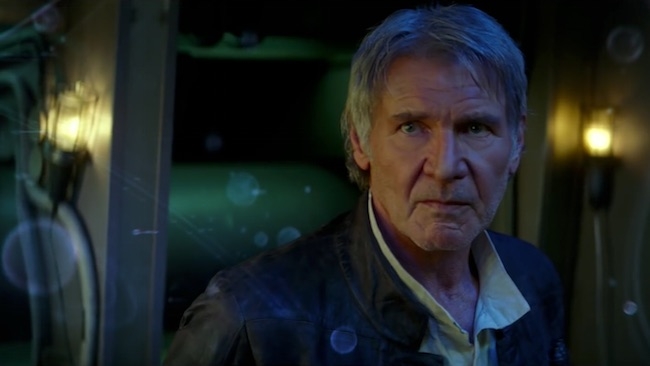 It's real. All of it: Mark Ramshaw on the cameras and software clues that are buried in the latest — and very much greatest — internet-melting Star Wars: The Force Awakens trailer.

That the whole world is now facing a Star Wars hype-a-geddon comes as no surprise. Perversely, the disappointing prequel trilogy George Lucas force-fed his fans from the late ’90s onwards has only served to increase appetite for a ‘genuine’ continuation of the series. Many Star Wars fans have effectively waited 33 years for this. That Disney has left no merchandising stone unturned in the run-up to Christmas hasn’t harmed The Force Awakens’ visibility any, either.

Even so, the studio has been remarkably frugal with plot details and actual footage. While the current Hollywood marketing trend is for media saturation via multiple teasers and trailers that all but reveal every major story beat and setpiece (see Jurassic World et al), Disney and Lucasfilm have cunningly - no doubt under the guidance of the movie’s famously secretive director J.J. Abrams - left fans unusually starved of information.

If it failed to reveal much in the way of story, April’s second teaser at least did a remarkable job of reassuring everybody that The Force Awakens would honour the original trilogy’s legacy, via a canny (and in some moments tear-inducing) blend of both faces and technology old and new. Now the final, full trailer puts more meat on the bones, while affording a closer look at just how Abrams has balanced story with vfx-powered spectacle. Here are the key things we’ve learned... 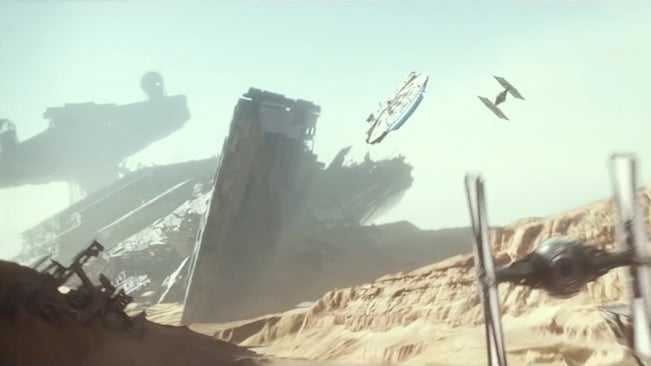 Much has been shot in-camera

July’s Force Awakens Comic-Con reel emphasised just how dedicated Abrams has been to working with real sets and real-world locations. Now we can get a glimpse at the pay-off. Tellingly, the opening shot is a close-up of a face (Rey’s), one surrounded by dust motes and wearing goggles appropriated from an old Stormtrooper helmet. Later we see the character traversing the deserts of Jakku with her BB-8 droid in tow - whether the Abu Dhabi backdrop has been enhanced isn’t clear, but we know the little robot is the real, freewheeling deal.

That dedication to practical effects work extends to the use of large-scale miniatures and proper matte paintings, while the production team went so far as to research the construction techniques used on the original trilogy (including the use of modular interior elements for quick repurposing). It helps lend shots a familiar and suitably lived-in appearance.

Further analogue warmth is added through the use of 35mm and IMAX cameras (the Panaflex Millennium XL2 and IMAX MSM 9802) and anamorphic Panavision lenses - a far cry from the 1080p Sony F900s employed by Lucas for the last three films [though see Freya Black's note below on this in the comments - Ed]. It all provides a better foundation for the integration of digital elements, which were largely crafted by the vfx artists at ILM offices in San Francisco, Vancouver, London and Singapore (Base FX, Blind Ltd, Propshop, Kelvin Optical and performance capture facility Imaginarium Studios also contributed to the film).

Space looks better than ever

For all the talk of practical effects work, every single space craft seen in the trailer has been digitally modelled and rendered - likely with ILM’s preferred combination of tools: Maya, Zeno, Renderman and Arnold.

Given that the final movie is rumoured to feature 28 fully digital sequences out of a total of 357 scenes, it’s fair to assume a good number of these will be orbital or deep-spaced based action sequences. But while Lucas embraced CG like a kid in a sweet store with his own Star Wars prequels, filling out every last bit of every action shot with incident and hardware, the new trailer suggests Abrams has sensibly opted for restraint in a way that apes the John Dykstra-orchestrated miniatures work of old while still increasing the scale and ambition. Only the absence of those lovable analogue compositing blemishes give it away.

It’s a small moment in the new trailer, but an interesting one. Where once we saw the Falcon enter hyperspace via cockpit views of blurring star-fields, we’re now able to ride alongside the spaceship as it goes interstellar. ILM’s R&D team had previously worked their star-blurring magic for Abrams when he helmed 2009’s Star Trek reboot, though this time shots in the Clone Wars and Star Wars Rebels TV shows were clearly a reference point.

This is a war movie

The camerawork and editing suggest classic World War 2 dogfighting movies have been a strong influence, just as they were on the Death Star trench and Hoth sequences in the original trilogy. The character-based shots in the trailer tend to work the digital enhancements in an almost nonchalant way. But when the aerial combat begins, Abrams harnesses CG to throw the camera right into the middle of the action and sensibly eschew spatially-confusing quick edits in favour of whipcord camera tracking.

As well as splendidly showcasing the photoreal hard-body visual effects work from ILM, this makes such sequences immersive, kinetic and easy-to-follow. Sequences featuring the Millennium Falcon barrel over starship wreckage and X-Wings skim over water as they battle Tie Fighters are pitch perfect.

Explosions are the new lens flare

J.J. Abrams claimed he’d kicked that unhealthy obsession with lens flares… but it looks like it may have replaced it with an explosion fetish to make Michael Bay blush. The nature of the shots in the trailer means all that fire and fumes are likely digitally simulated and rendered. ILM will have relied on its own in-house tool Plume, which utilises a fully-3D Eulerian solver with a volume ray-marching renderer. (Coincidentally, ILM previously used Plume to handle the non-practical explosion work on Bay’s most recent Transformers movie.)

But wait, what’s that superweapon firing into space, in the shot introducing arch villain Kylo Ren (at 0:50 in the trailer)? We’re not sure if it has enough power to destroy a planet but it does pack some pretty intense lens flare.

The Death Star is in there!

Well, sort of. These days it’s the name ILM gives to its primary render farm.