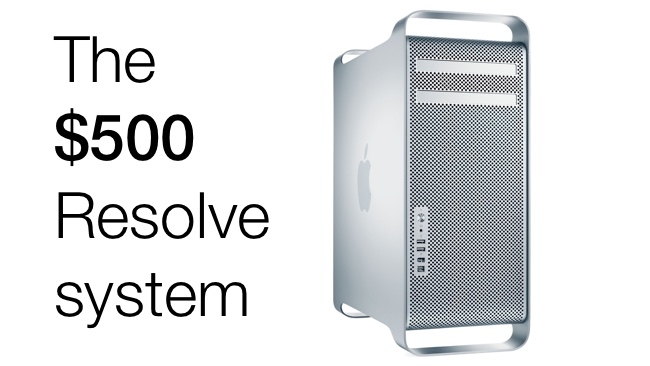 Thanksgiving Weekend Replay: Eric Escobar breaks down how you can turn a first generation Mac Pro and a collection of parts into a fully-fledged grading and finishing workstation for a mere $500.

With the performance enhancements in the release of Resolve 12 Public beta, a whole new class of computers now have the option of being workaday finishing systems. The class of machines I'm talking about are called 'e-waste': obsoleted, nine year-old computers that are practically being given away or sold for a couple hundred dollars. Do a Craigslist or eBay search and you will find machines as cheap as $100. Ask around and you may find one for free, like I did. A friend's company had just replaced an old workhorse MacPro 1,1 that was being used as a server. No one in the office wanted to lug home a 40lb machine, so I swooped in and grabbed it before it got sent to the recycler.

That's right, changes in software suddenly 'unobsolete' machines that are sitting in closets or being used for non media-creation duties.

What do I mean by inexpensive? Here's a basic shopping list:

So, for somewhere between $460-$610, you can have a box capable of doing some amazing GPU based work, specifically some amazing GPU-based Resolve editing and grading work. But first, you have to "unobsolete" the machine by hacking the Yosemite Installer so it will load on to your Mac Pro 1,1 – a machine that was never intended to run a 64 bit OS, but is totally capable of doing just that.

How can an old Mac run Yosemite?

The caveat: Apple does not support this, as it made the decision to leave the 2006/2007 Mac Pro's in the rear view mirror for reasons only Apple understands. When OSX went 64 bit, the early adopters that shelled out thousands of dollars for these machines were left stuck running OS 10.7 Lion, unable to join the ride to 64 bit land. Are the Intel processors in the MacPro 1,1's 32 bit?

Nope, only the EFI32 firmware is 32 bits. These machines have dual Xeon 5150, enterprise class 64 bit processors – rock solid 64 bit performers. But you can't load Yosemite without first creating a different boot loader. With a new boot loader, you can easily launch the Yosemite kernel and smoothly run the OS. It's a real install of Yosemite, so you can easily install and run Resolve 12 beta.  And thanks to a dedicated community of MacPro 1,1 hackers, your old Mac will continue to run the latest OS.

How can I get a Yosemite Installer?

The cheapest way to get a Yosemite installer is to make one yourself following these very clear instructions, stored poetically, on iCloud. Not only will this cost you just the price of an 8GB jump drive ($4), but you will also have the feeling of accomplishing a useful hacking job when you make an old machine, designated for the trash heap by a massive corporation, suddenly alive and running again. Hack an installer, save a computer. For me, it's really interesting to learn about things like boot efi's and all the things that live under the candy-glossy shell of the GUI, but I understand that for others this idea totally freaks you out.

If hacking a boot loader intimidates you, you can find them pre-built for about 50 bucks on Amazon. I can't vouch for the veracity of developer claims or functionality of such products (after all, it is a hacked copy of Apple's OS that someone is selling over the internet). So, buyer beware.

At the most basic, you must have a Yosemite compatible card installed in your machine. The stock cards that ship in 2006/07 do not run under the OS, so at the minimum you'll need a newer PCIe-based graphics card, like the nVidia GeForce GT120 that's been "flashed" to run in a Mac.

However, if the point of your project is to build a truly effective Resolve 12 box, you'll want to get something speedier than that. The top of the line and most expensive is a Radeon R9 280X that's been properly flashed. This will run you $450, but then I'd have to re-title this post. Therefore, a great option that balances cost with performance is the Radeon HD 7950 Mac edition or Mac flashed like this one that is presently available on eBay for as low as $180.

One of the great things about these old machines is that you can get a ridiculous amount of really fast RAM for very cheap. It has to be DDR2 PC2-5300 667MHz ECC and you have to buy the sticks in pairs, so if you want 8GBs, then get four 2GB or two 4GB sticks. My hand me down machine already had 5GB installed, so I put in an additional 16GB of memory which has proved to be plenty, although the machine can take up to 32GB of RAM (something Apple does not support, but it doesn't support hacking the boot installer, either).

For years, we have had to deal with the bottle neck of data i/o. It didn't matter how fast our processors were; we still had these spinning metal platters to contend with. Even as manufacturers managed to get them spinning at faster and faster speeds, we were always up against limits of the old technology. In my experience, there has been no cheaper, faster and more effective way to speed up a machine than replacing the hard drives with Solid State Drives (SSD). I am not exaggerating in saying that it is like getting a new computer. The OS boots quickly, apps are zippy and everything just runs faster.

The wonderful tech-makers at Blackmagic seem to have a solution to literally every possible workflow permutation. A cheap Resolve box simply needs to have some way to monitor a gradable signal, such as a PCIe card that would just send out an uncompressed, 1080P, 10 bit video signal via SDI or HDMI. And wouldn't you know it? Blackmagic makes one called the DeckLink Mini Monitor. You can get one used for $100 or splurge for a new one for $140.

The final part of the set-up turns out to be the easiest. Mac Pro 1,1's have a really easy to use set of hard drive slots where you can pull out drive trays, seat in four new SATA hard drives, then software stripe them together with Disk Utility. I have been doing this long enough that I have stacks of 7200RPM SATAs sitting around. You may not have spare SATAs handy, but don't worry – they're cheap. You can get a 1TB drive for $50 now.

Much digital ink has been spilled in describing just how amazing the latest release of Resolve is, even though it is still in public beta. The thing that I have been impressed with is how scalable the application is. The trick seems to be in tuning the application to your specific workflow and set-up.

If you're going to run it on a MacBook Air with just a system drive, then you're not going to be working in either h.264 or 4K. You'll benefit from learning about the render cache and working with optimized media, these are all things that Resolve 12 does auto-magically, but getting to know what they are might help speed up your machine.

If I was to spend extra money on this system, I would spend it on SSDs. I would pull out the optical drive and replace it with as big an SSD as I could afford. I would then dedicate this SSD as the destination for my render cache. I would also replace my media hard drives with an SSD array – an insanely expensive per-gigabyte expense, but it would let me move 4K around faster.

The final addition (and one that is not that expensive to do) is a brain transplant. A Mac Pro 1,1 quad core can be upgraded to an octocore machine for about 75 dollars in parts. I even have all the components. However, it is a very involved and risky operation. There are step-by-step video instructions on YouTube on how to do it, but it is a very easy way to kill the machine completely. If you succeed, then you'll reap some fairly respectable benchmarks from a nearly decade old box.

Just how fast is this new system?

From a straight CPU performance perspective, about as fast as a MacBook Air. That's the biggest reason to risk the CPU upgrade; you'll more than double your processing power. While Resolve is still an app built around GPU performance, sooner or later your media has to get pushed through the CPU. Also, everything else, from OS to app to data flow, relies on the processors. With a quadcore machine, your speed is limited. The upside is that, for about 500 dollars, you now have a machine that can perform media management, editing and color grading duties. It can send out a grade-quality signal to your critical displays and will keep working for the foreseeable future. That's a price-performance ratio that's hard to beat.