Is it time to change the rules of editing? 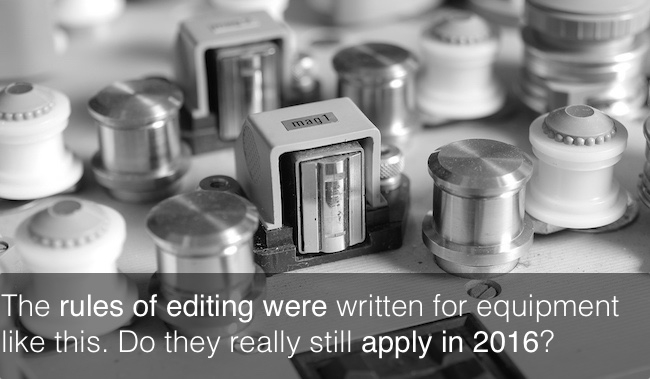 Once upon a time...a close-up of Steenbeck film rollers

RedShark replay: The process of editing has progressed from the physical cutting and splicing of film to the infinite possibilities of computer based non-linear editing. Is it time to change how we do things?

First off, it’s worth pointing out that whatever the technology used, the goal of the editor is still the same: to tell a story, to breathe life into the director’s vision and to captivate the audience.

The first edits were made accidentally: stopping and starting the film in the camera created cuts between shots - and some of them worked. Early pioneers of the silent movie era such as D. W. Griffiths experimented with editing. Introducing concepts like close ups, reaction shots and parallel action. His movie The Birth of a Nation is considered a landmark in the history of cinema.

Gradually, editing developed into a visual language, and like speech or the written word it has it’s own grammar and rules. Some of those rules were codified by Edward Dmytryk, a 1950s Hollywood Director and Editor, in his book On Film Editing. Walter Murch, Oscar winning Editor of Apocalypse Now, The Godfather and The English Patient also wrote an extremely influential book on editing called In the Blink of an Eye.

The basic rules of editing can be broken down as follows:

Of course each of these “rules” can be broken and in many cases edits work even when they break the rules. Stanley Kubrick used crossing the line to create a feeling of unease in The Shining, and Christopher Nolan created Memento to tell the story completely out of sequence.

Today, editing is accessible to almost everybody and many of the pieces that are uploaded to YouTube or Vimeo have been edited by those with no formal training in editing and so have never been taught these rules. Yet they still manage to make compelling viewing (in some cases!).

In the same way that babies learn how to speak by copying their parents, today’s young filmmakers have grown up watching movies, TV, pop videos and YouTube. They have learnt how editing works by osmosis and now have the tools to be able to shoot and edit their own films. They break the rules but in the same way that spoken languages evolve with new words and slang, so do new styles of editing where the old rules don’t hold true. The way a skateboarding video shot on GoPro is edited will be completely different from a short film shot on a Canon 5D.

I do think one thing that learning the rules of editing teaches us is that you need to start thinking about the edit before the shoot. Blocking out scenes and deciding where you are going to put the camera in relation to your subject will have an effect on the composition of your shots, which in turn affects your editing possibilities.

If you plan your shoot precisely you will shoot less and your edit will go together more simply. It is much easier to plan to shoot some cutaways on location than it is to try to cover jump cuts in the edit.

Jump cuts in interviews are a case in point. It is now easy to chop up an interview in terms of audio to get the subject to say exactly what you want, but covering those cuts with cutaways or B-Roll is only possible if you have it. It is becoming commonplace for interviews to be left with jump cuts in place, which at least is honest about how the piece has been edited but at the same time is visually jarring and distracts from what is being said.

At this year’s NAB, Adobe announced a new feature for Premiere Pro: the ‘Morph Cut’. This will analyse the shots on either side of a jump cut and track the features of the subject, allowing it to create intermediate frames to join the two shots together seamlessly, hence hiding the cut. I’m not sure if this is a good thing or not as soon we won’t be able to trust what somebody is saying on camera as the editor might have completely changed their meaning.

As Martin Walsh, editor on Chicago and V for Vendetta, said: “Don’t accept that there are rules. In editing the whole point is to challenge every convention.”

A version of this article first appeared on the Forscene blog.