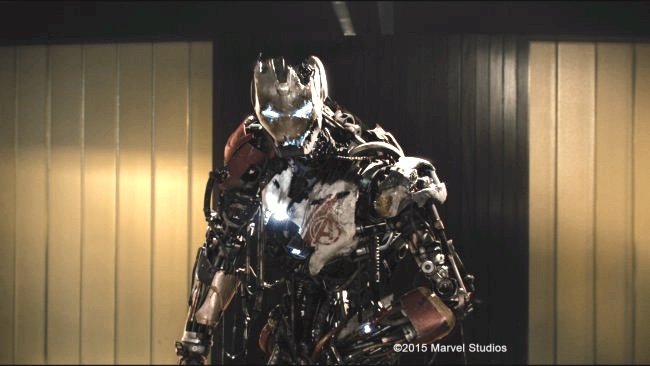 Avengers: Age of Ultron saw 20 VFX houses complete somewhere in the region of a massive 3000 effects shots. Munich's Trixter Studios was one of them, its allocation of 400 shots including engineering the eponymous villain's grand entrance.

Founded in 1998 and originally known for its work in the advertising and local film/broadcast sectors, Germany's Trixter has grown to become one of industry's most respected boutique VFX studios, contributing to a slew of blockbusters including Iron Man 2, X-Men: First Class, Cloud Atlas, Avengers Assemble and both Captain America films. Its association with Marvel is particularly significant, with the multi-billion dollar Disney subsidiary clearly viewing the studio as one of a select few safe pairs of mid-sized hands. 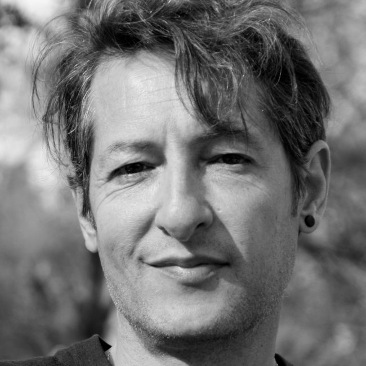 "The relationship is definitely one of trust," says Alessandro Cioffi, Visual Effects Supervisor at Trixter. "We started with smaller scale work and things have gradually grown in complexity, so we're now at a point where we've proven our ability to meet the quality they demand. Marvel really have set a standard for blockbuster films, and they're continually push to improve, to meet the audience expectation of something bigger and better."

To deal with the massive digital demands of Avengers: Age of Ultron (there are around 3000 VFX shots in the final movie), Marvel's VFX Supervisor Chris Townsend assembled a pool of 20 vendors, featuring industry giants like ILM and Double Negative, alongside multiple smaller vendors.

"Working on Marvel movies in the past obviously helped a lot in terms of fitting in with their visual language and collaborating from a technical point of view," says Cioffi.  "We've also worked with Christopher before, so we're very fluent at interpreting his wishes and matching his vision."

Trixter ultimately worked on around 400 shots in total, with approximately 300 making it to the final cut. "The movie was supposed to be six hours long," jokes Cioffi.

This workload included development of Quicksilver, Scarlet Witch, the Iron Legion and Ultron Mk1 - the first incarnation of the movie's main villain. Character work was handled using a pipeline comprising Maya for asset creation and animation, Katana for lighting and render work, then Renderman and (occasionally) Arnold for final raytrace rendering, with Houdini and Mantra for effects and Nuke for compositing.

Cioffi says they began look development for the Maximoff siblings - Quicksilver and Scarlet Witch - during preproduction in late 2013. "We looked at ways to convey Quicksilver's speed and to portray Scarlet Witch's magical abilities, coming up with different approaches for each that would still look connected somehow, while also remaining faithful to comic book lore."

"The Maximoff twins appear in a lot of sequences, so while we created the look, developed the effects, and produced some shots, we also needed to deliver files for other vendors to utilise," notes Cioffi. Trixter also utilised assets from other vendors working on the show, for the shots featuring Iron Man in the movie's opening action sequence, sequences in the climactic battle between the Avengers and Ultron's robot army and, most notably, the 150 shot 'party fight' scene that spectacularly introduces the Ultron character.

"We started off with a pretty sketchy original Ultron Mk1 concept from Marvel," says Cioffi. "That gave us the idea how this character might look, but it's a different story when you then need to bring it into the 'real world'. We spent time not only collecting all the components - building him from broken old Iron Man parts, Legion robot pieces, and metal scraps - but also investigating the damage and grime that he would wear. The idea is that Ultron is eager to own a body so initially just uses what he can and director Joss Whedon wanted to give the impression that the robot was spilling oil, that his form was very transitory."

This seemingly ramshackle first version of Ultron also needed to be rigged to accommodate the motion captured performance provided by the actor James Spader. And in fact, the first rigged model they created ultimately helped Spader refine his approach to the character, with the actor particularly inspired by a simplified real-time avatar that provided a 'digital mirror' during motion capture sessions conducted by Andy Serkis' Imaginarium company over at Shepperton Studios.

"Getting immediate feedback to see how the Ultron model was moving providing the last piece of the puzzle and prompted him to modify his performance," says Cioffi. "He got the capture team to constrain parts of his body, pinning back his left elbow and adding weights to one of his leg, to help breathe life into a very creepy performance with that asymmetrical hunched robotic body. For us, it was then often just a matter of cleaning up the mocap curves, adding some secondary animation and a bit of further detail."

While Spader has a famously expressive face, Ultron Mk1's visage is a blank mask, so Cioffi says the artists had to find alternative ways to transmit that aspect of the performance: "The only direct way to interpret it was to reflect the sound of his voice using the intensity of the lights in robot's head. The rest was all about capturing the actor's other head movements, such as the way he lifts his head, nods and shrugs.  Spader's subtle body language is so intense and so well-crafted that we didn't want to miss any of it. It all helps to give the character credibility and that essential sense of possibility, even though, at this point, Ultron is constructed from spare body parts and metal scraps...it really is an amazing performance."

For more coverage, check out our Avengers: Age of Ultron Photo Gallery on Page Two! 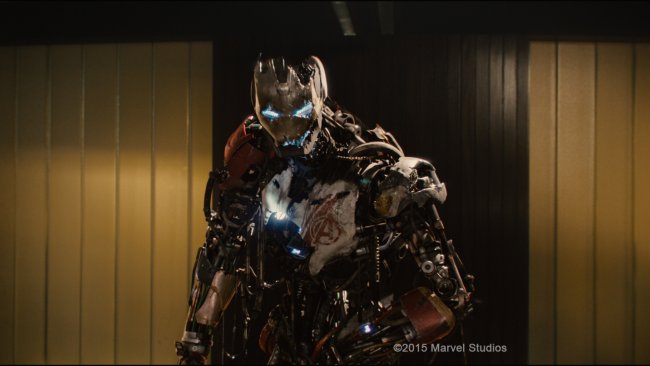 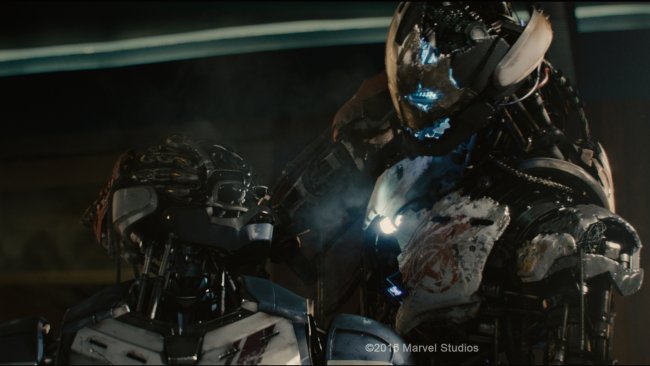 This first incarnation of Ultron is composed from scrap parts, including a scarred Iron Legionnaire mask and old Iron Man suit components. 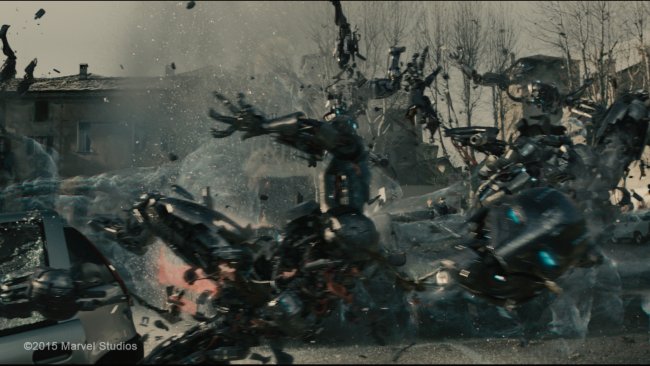 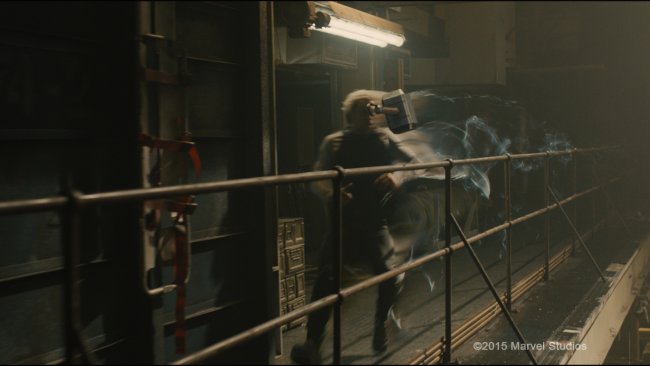 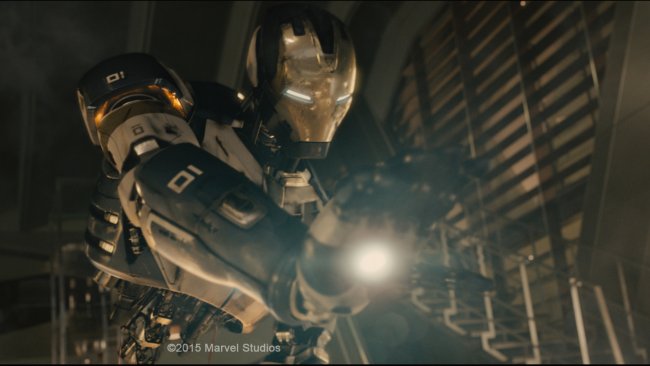 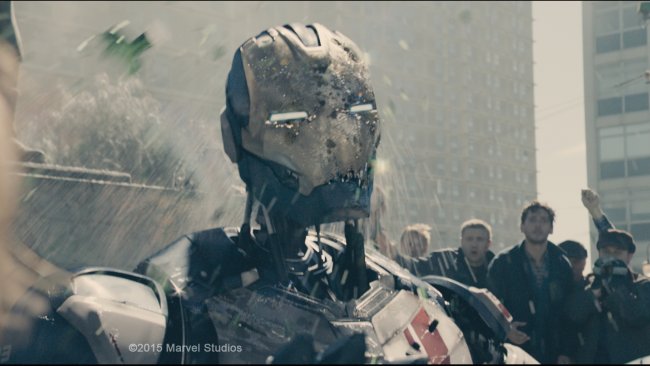 An Iron Legion robot is attacked with acid. The same mask is later appropriated by Ultron. 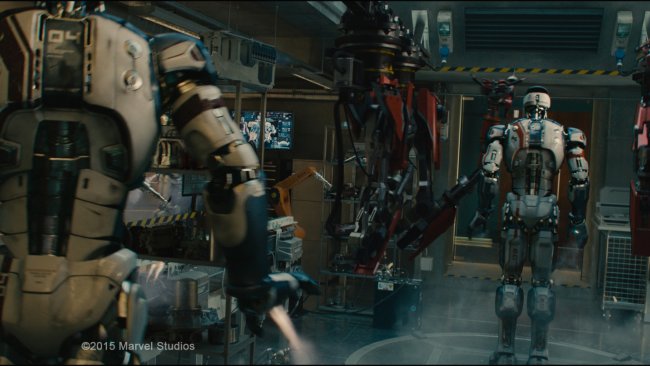 "It's always fun to work on high-tech robot," says Cioffi of the Iron Legion sequences.