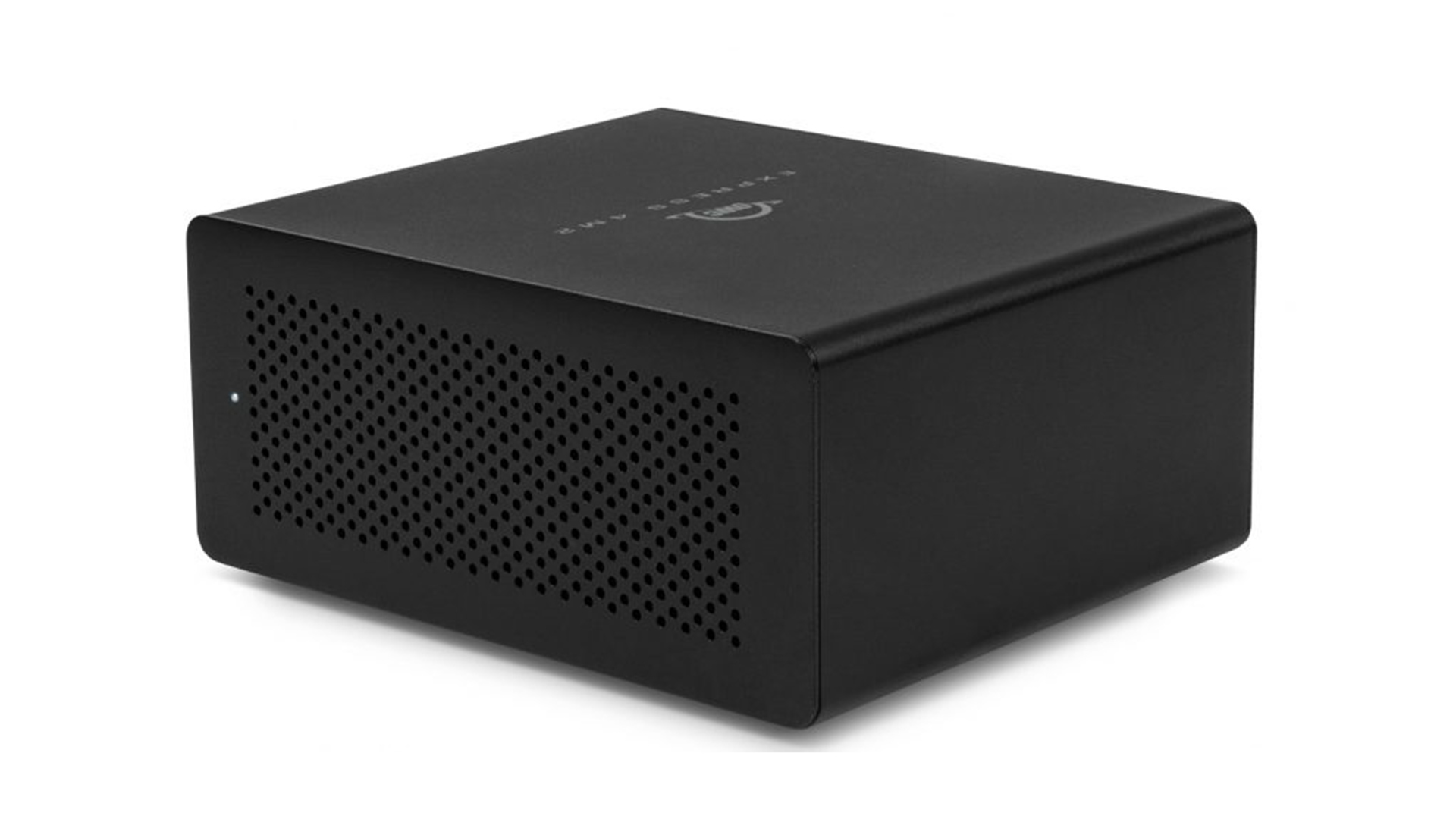 We review the OWC Digital Express 4M2, a price effective alternative to the ThunderBlade. Let's see how it stacks up.

OWC Digital’s ThunderBlade is a speed demon that is absolutely silent as it lacks any sort of ventilator. The downside is that it is quite expensive. OWC fixed that by coming up with something that comes close but is about one-fifth the price of the ThunderBlade. It’s the OWC Express 4M2.

OWC’s Express 4M2 is a nice black aluminium box with an unobtrusive grille at the front, the OWC logo engraved on top and a DisplayPort and two Thunderbolt 3 ports at the back. Especially the latter is a relief as, just as with the ThunderBlade, it means you won’t lose a port when the Express 4M2 is connected to your Mac or PC. The 4M2 has four slots for NVMe SSDs that you can install using a screwdriver. To open the box, you don’t need one as there are two special thumbscrews to slide off the hood. Unscrewing those leaves only the bottom, the sides and a metal frame with the removable ventilator on top.

The box is small enough to be cute and you can place it on its square side as well as upright. Both ends are fitted with small, black silicon feet. My test unit came empty with OWC providing me with four Aura P12 SSDs. Mounting them was a breeze. The only hard part is unscrewing the ventilator without stressing its power cable. Oh, and the mounting screws of the SSDs have a tendency to drop inside the enclosure — as all tiny screws seem to have — but the whole thing is designed to be foolproof, so putting it on its head immediately makes those fall out. 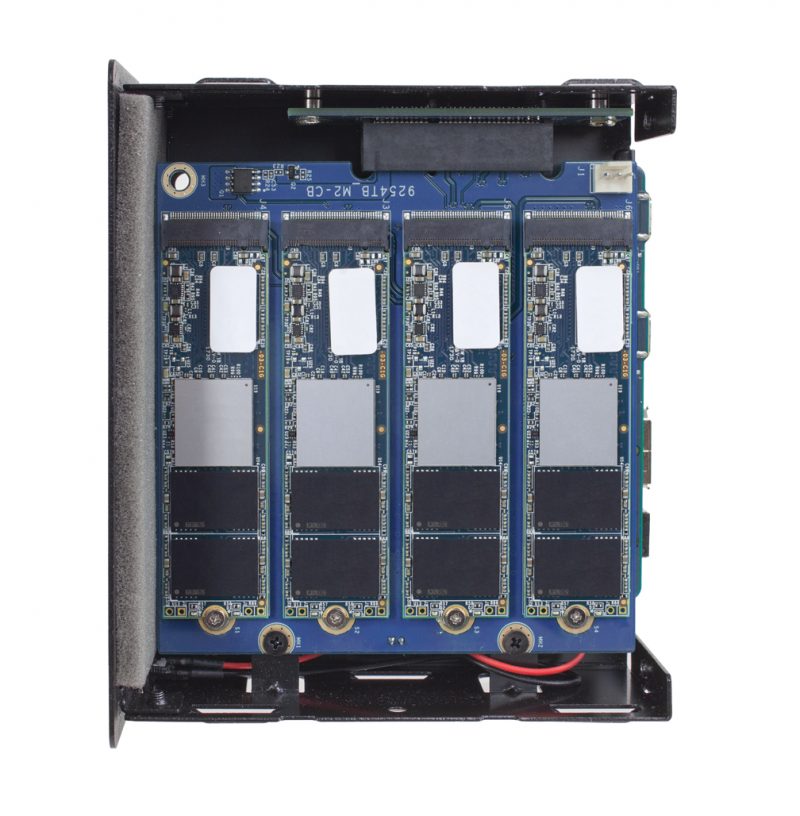 Installing took less than 10 minutes. The universal power adapter is an external brick and after plugging in the mains, all you’re left to do is connect the Thunderbolt 3 cable to the computer. The Express 4M2 comes with a limited SoftRAID licence that allows you to use the app with OWC Digital devices only. If you have SoftRAID on your system already, there’s no need to install the limited version, of course.

With SoftRAID installed, you can put the four SSDs inside in a RAID 0 or 1 configuration, or use the 4M2 as a JBOD unit. You’ll get the highest performance from RAID 0, though, so that’s what I put it in. An advantage of the Express 4M2 being sold as an empty box is that you can start with one or two SSDs inside and add one, two or three more as needed. I tried using it with two Auras inside and it worked like a charm as much as it did when used with a single 1TB Crucial P1 NVMe SSD.

So, has OWC cannibalised the market for its expensive ThunderBlade model? Not exactly, it hasn’t, and there are a few reasons for that. For starters, the ThunderBlade has a sleek design, literally. You can place it under an iMac’s display, you can even stack two of them and place them under the iMac’s display. That’s not going to happen with the Express 4M2.

In terms of speed, the Express 4M2 performs only marginally less well than the ThunderBlade. On my machine I got a nice 2200 MB/sec write speed and 2300MB/sec read speed out of the Auras inside. That’s almost as good as one ThunderBlade.

However, while its performance is on par, there’s a second reason it won’t eat into the ThunderBlade’s market. The ventilator generates quite some noise and more as you put stress on the SSDs. When rendering clips, colour grading, etc, the ventilator starts working harder to keep the inside cool and that’s audible. It’s worse when you put the unit on its side, but even when sitting on its bottom, it’s quite audible if you place the unit next to your monitor.

So, I put mine at the back of my desk, which is 1m deep. At that point, certainly when it’s placed behind other stuff that can act more or less as a sound barrier, the sound becomes much more palatable. I put it behind a desktop audio monitor and ended up also putting it behind a small blanket. At that point, it became inaudible. This does mean you will need a Thunderbolt 3 cable of at least 1m and those of over 90cm don’t come cheap as they’re active cables.

Of course, even then it’s not going to cost you as much as a ThunderBlade with comparable storage space. And you still get the advantage of not losing a port and of being able to start out with only one, two or three SSDs. That allows you to build up storage space as your needs dictate and spread costs over time.

So, my final judgement is that I’m quite smitten with this cute black box. It retails at $279.75 at the Mac Sales website.