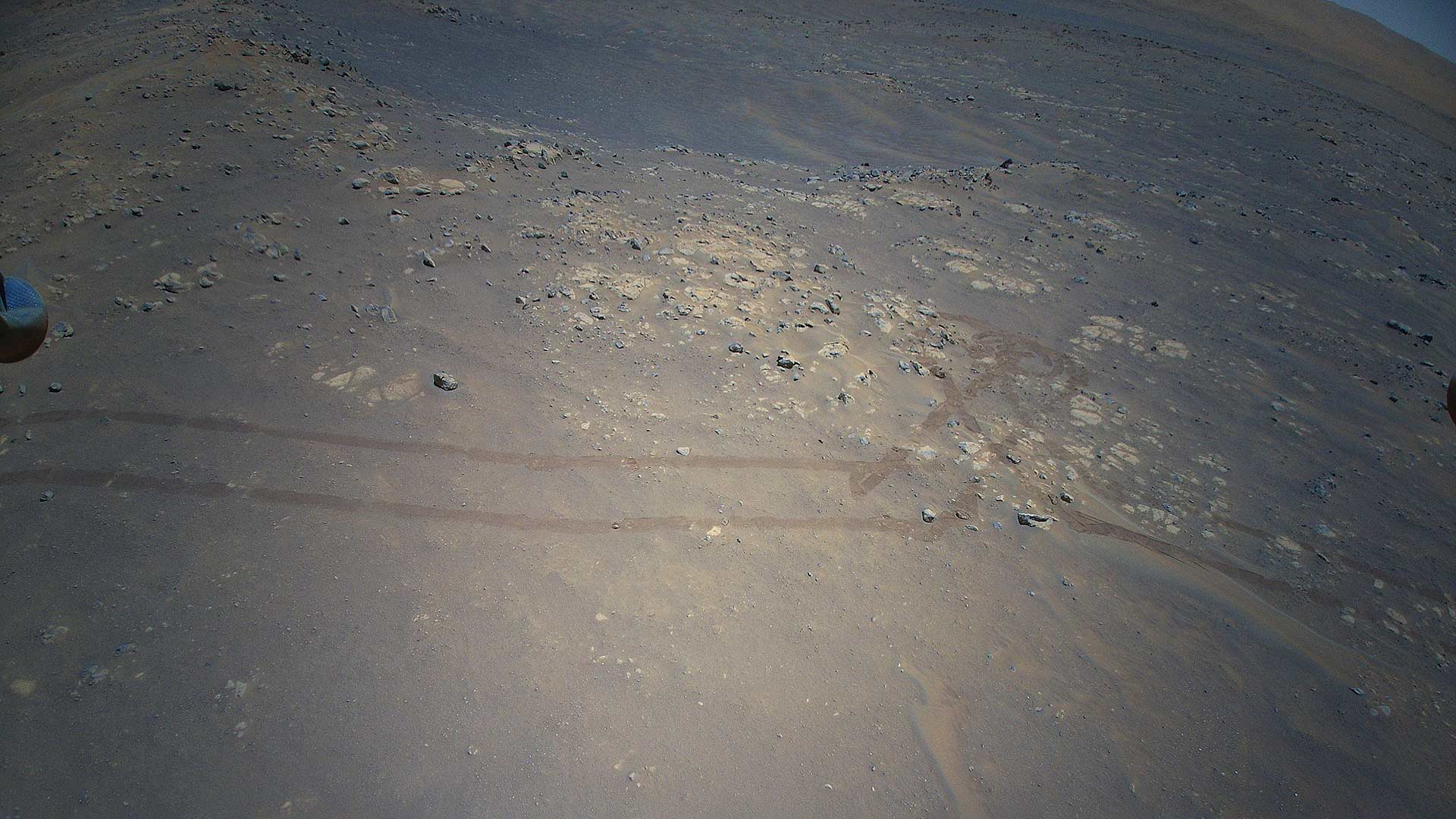 3 minute read
A view of Mars. The Ingenuity helicopter photographs the tracks from the Perseverance rover. Image: NASA/JPL-Caltech.

The Mars Ingenuity helicopter has completed its ninth, and most challenging flight so far, and it has also produced some detailed high resolution aerial photos in addition.

The Mars Ingenuity helicopter continues to impress. It probably wasn't predicted just quite how successful it would be, and yet it continues to outpace expectations. Its early successful test flights earned the flight vehicle a mission extension to further exploit what it might be capable of.

The helicopter is being pushed further and further in terms of its envelope, with the 9th flight proving to be its longest yet at a distance of 625 metres, breaking previous records for flight duration and speed. The flight lasted two minutes and 46 seconds at a speed of 5m/s in an area of the red planet called “Séítah”, which is a difficult area for a ground rover like Perseverance to negotiate.

The flight was more than just a test however. It also served a practical purpose by providing a detailed aerial view of science targets that Perseverance won’t be reaching for a while, or in some cases at all. Images were captured using Ingenuity’s on board 13MP camera at 4K resolution. 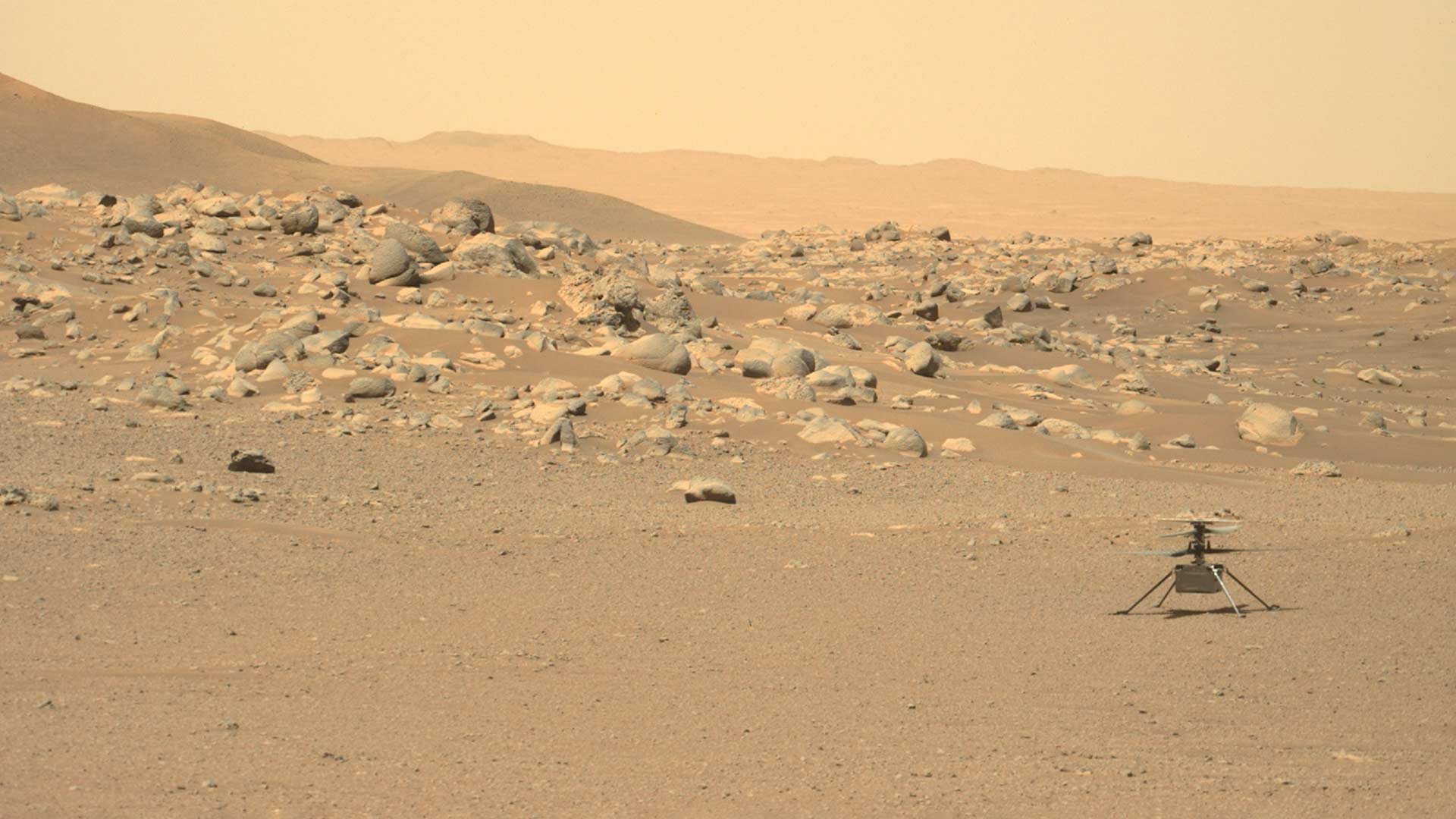 The Mars helicopter, ready for take off. Image NASA/JPL-Caltech.

How the Mars Helicopter navigates

The mission was a difficult one for the helicopter because its navigation system has been designed with the assumption that the terrain is generally flat, so the flight path had to be considered very carefully. Why was it designed to be like this? The answer lies in the fact that Ingenuity was never really designed to carry out practical scientific missions. Instead the system was designed simply to be a technology demonstration at one specific site.

Designing it to assume that the ground is flat meant that the navigation system could be kept simpler. The helicopter sees the world  as essentially dots that move around with time, and it has no concept or understanding of what it is looking at. To make the on board navigation system easier, the engineers freed it up from having to work out complications such as terrain height and undulations. This makes it easier for it to interpret and calculate the way features are moving using its own movement.

The problem is that as soon as Ingenuity encounters any sort of terrain height variation, the way objects appear to move across its field of view changes, which can introduce navigation errors, because it hasn’t been designed to cope with this type of information. According to Ingenuity Chief Pilot Håvard F. Grip, and Perseverance Deputy Project Scientist Ken Williford, one of the most significant errors this can cause is that Ingenuity will potentially end up flying in a totally different direction to the one that is intended.

This means that the pilots and scientists had to design the 9th flight’s flightpath such that it avoided features such as large craters, which would have risked derailing things. 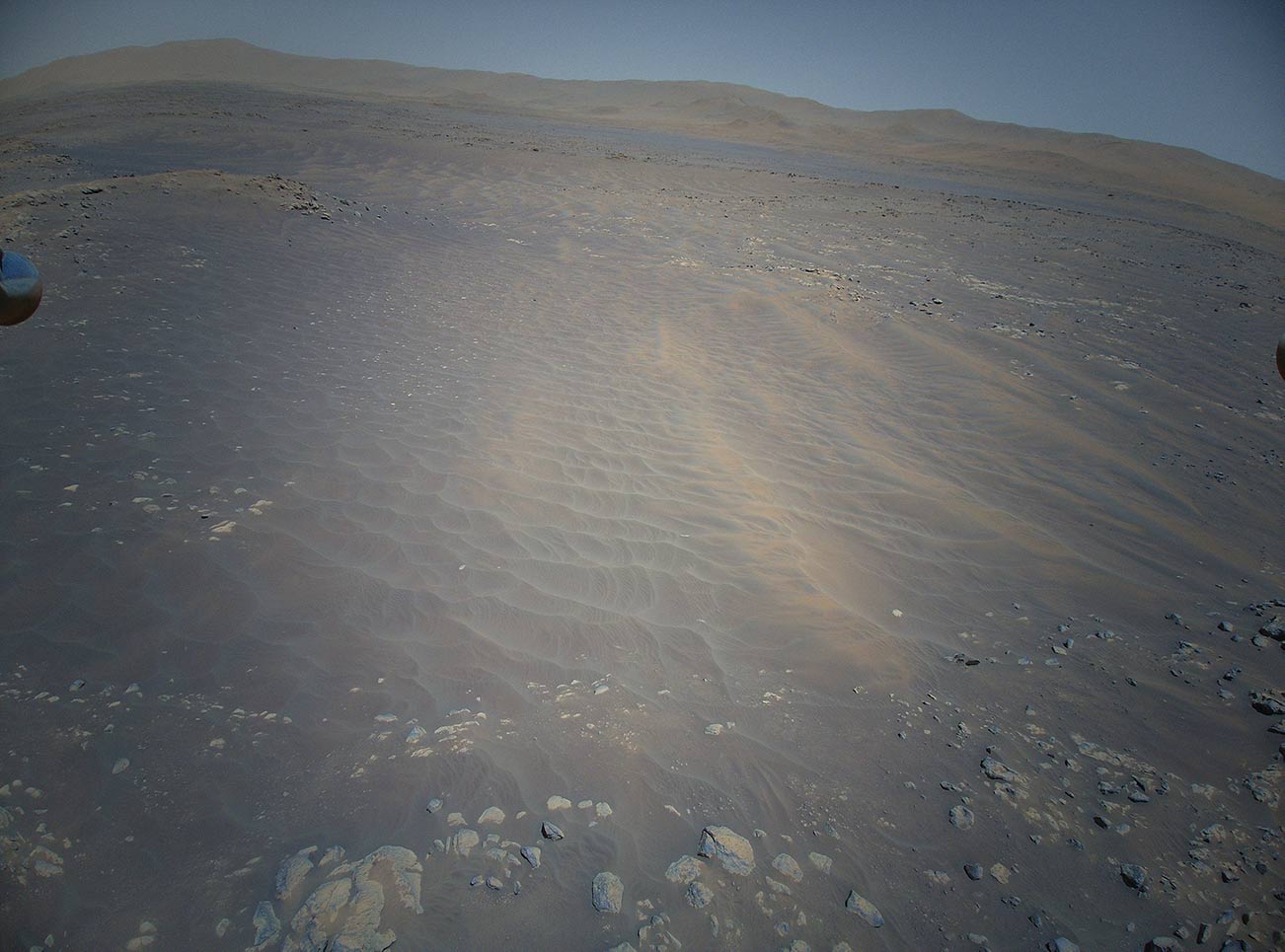 Another aerial image produced by the colour camera on board the Ingenuity helicopter. Image NASA/JPL-Caltech.

A lot of preparation went into the flight, with simulations being conducted to test the likely outcome. But although they needed to avoid as much undulating terrain as possible, it wasn’t completely avoidable. The resultant flight did in fact take Ingenuity into an eroded crater and then a descent over some sloping terrain before climbing out onto a flat plain.

The images that Ingenuity produced are giving scientists an insight into an area called “Pilot Pinnacle”, which the project’s scientists think might well produce a record of the deepest water environments in what was Lake Jezero. "Given the tight mission schedule, it’s possible that they will not be able to visit these rocks with the rover, so Ingenuity may offer the only opportunity to study these deposits in any detail" the duo of Grip and Williford stated in an update on the mission blog.

The Perseverance mission is turning out to be one of the most visual NASA missions yet, with the camera technology being at the forefront of not only scientific analysis, but for the current demanding world of public relations and media. The catalogue of high resolution imagery grows on an almost daily basis and is available for anyone to download and view.

Recently NASA produced a highly in-depth live talk about the camera technology it uses, and how they manage to transmit the resultant images that we can see.