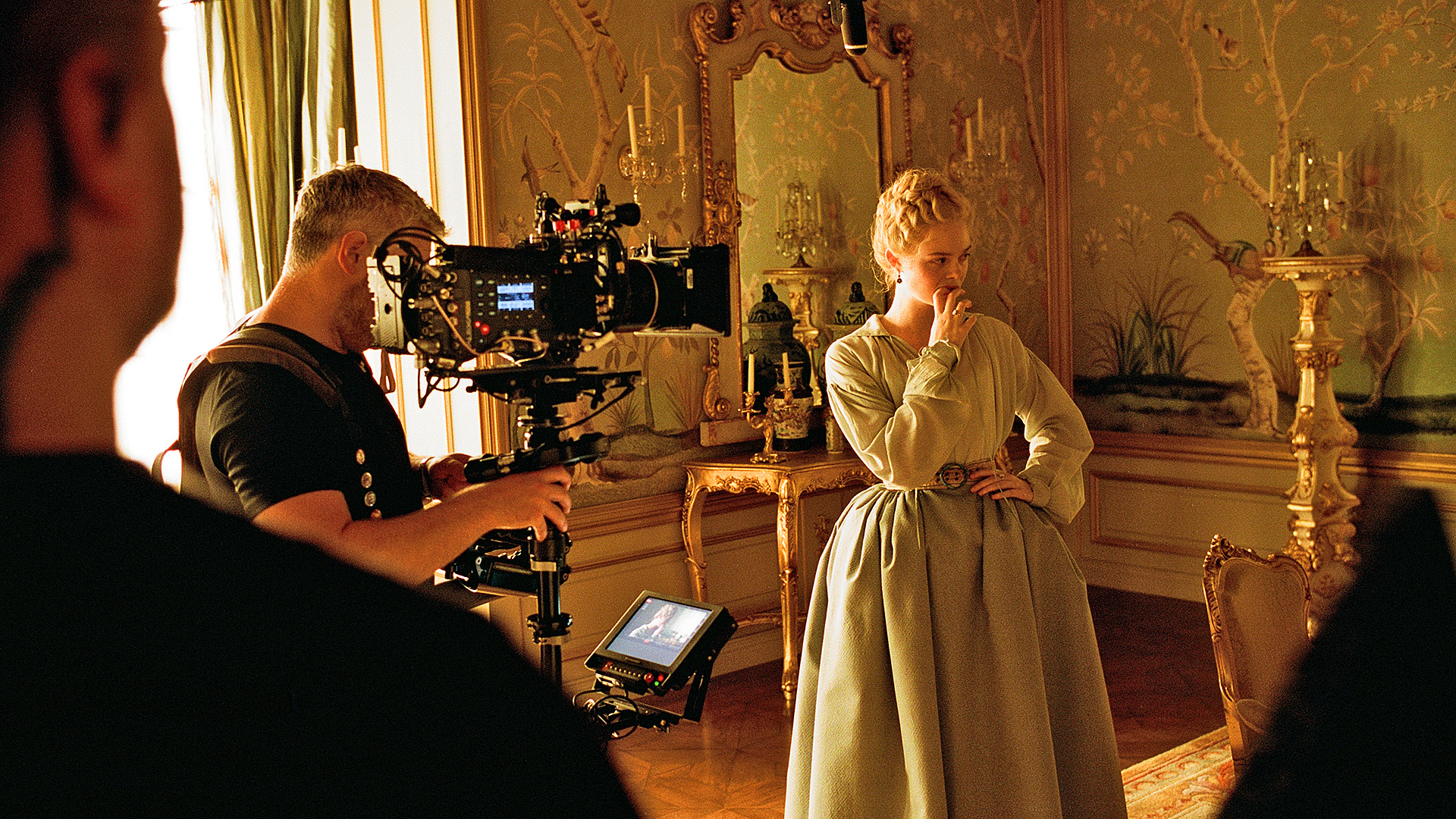 4 minute read
The ALEXA SXT Plus being used on the set of The Great.

The ALEXA SXT Plus being used on the set of The Great.

The Great is not your usual stuffy period drama. It depicts the rise of Catherine the Great (Elle Fanning) in the Russian court of Emperor Peter (Nicholas Hoult) and doesn’t censor the vanity, the profanity, the violence and the grotesque.

The 10x 60’ satirical drama originated on Hulu and arrives on Channel 4 this summer.

Created by Tony McNamara, who wrote the aburdist Oscar-winning wart and all royal feature The Favourite), The Great is proudly anti-history, anti-BBC Drama department.

“Visually, we don’t want an audience to expect Pride and Prejudice when they’re going to get something between the Princess Bride  and Blackadder,” says cinematographer John Brawley (Queen of the South). “One way to do that is through camera which meant leaning away from those epic crane shots and beautiful staging of the genre where everything is packaged and presented to the camera. We didn’t want it to look pretty. It is meant to feel contemporary and naturalistic.

He adds, “The hardest challenge in a way was trying to get a lot of the set dressers and wardrobe to go against their instincts and training to create something super meticulous and accurate when we wanted the opposite of that. In episode 5 for instance, Peter is jogging and he is basically wearing a hoody or tracksuit which is clearly not conventional.”

Show colorist Paul Staples, who works at London’s Encore Post, says, “Tony’s direction was not to make it look over graded or processed. He wanted naturalism over pictorialism and not ‘chocolate boxy’ or Disney fantasy in any way. That’s quite tricky, we as colourists always look for the beauty, but the brief dictated I stop just short of fantastical!"

ARRI ALEXA SXT Plus on the set of The Great.

The Great is principally shot on the Alexa SXT Plus, a decision Brawley inherited from the pilot shot nearly a year earlier by Anette Haellmigk.

He took three SXT models combined with Cooke S5 primes and with Zeiss Super Speeds for occasional shots that needed a lighter weight lens. He shot ARRI RAW on SXT at 3.2K framed for 2:1.

“I’ll do a pass of some unconventional coverage which is often me walking with a small camera like the G2 and using it to get close up and intimate with the actors,” Brawley explains. “Because they are very aware when the camera is on them, pushing into their face, they feel it’s like being in a live audience and they start tailoring their performances to that style of shooting.”

A Pocket Cinema Camera 4K was also used for shots in tight corners. “Because of way the beds were constructed on set - they were sort of part of the walls - we couldn’t move them away, often when we needed to shoot sex scenes in the show, so we needed a really, really small camera.”

Behind the scenes on The Great with John Brawley.

Matching the footage in post required Staples and Brawley to create a LUT for the Alexa and another for the URSA which were passed both through a normalising or base LUT.

“The idea is that we can make a specific LUT for a specific camera but when you shoot them in the same circumstances which we did on this show they will look pretty similar in the edit and it doesn’t leap out at you as dramatically different,” Brawley says.

Staples worked from the RAW files in a colour managed project in Resolve for the grade. “During the pre-shoot stage, John and I had created LUTs that accurately matched the look he wanted and how the colour management would handle the different formats,” he says. “When it came to grade, I used a pared back HDR version show LUT and for the URSA I had a correction node with primary balance, saturation, Hue V Hue etc and I would just put that onto the clip and it would get me very close. You do still have to grade it, obviously, as there is a slight difference but both cameras graded in really well, again, made smoother by diligent preparation and testing in the pre shoot stage. Resolve handled it beautifully.”

Matters were complicated by being an HDR deliverable - Brawley’s first.

“Even the best DIT set-ups still don’t have HDR monitors. We toyed with having an HDR suite with a scope and other tools near set and we looked at using some consumer grade HDR TVs but, in the end, once we’d done all the initial camera tests, I noticed that the big difference for me was the way I exposed the image.”

He elaborates, “Conventional exposure theory would suggest that with a camera like the Alexa that is ISO 800 it will reproduce a mid-grey as a mid-grey but if you set up for that in HDR then you are going to find objects in the frame over exposed. Candle flames, for example, tend to lose their color and can clip out very quickly and look unnatural. So, what I came up with as a solution, specifically because there are candles in every shot, was to expose from the top down.

Behind the scenes on the set of The Great.

“My starting point was not to over expose the candles in the HDR grade and let everything fall in underneath that. Since candles are usually the brightest object in the scene and I wanted to retain detail in them I began by setting the exposure so that the candles weren’t clipping with everything else being lit up to those levels.”

“I’d like to say it was hard for me to match but it really wasn’t,” says Staples. “Often with the windows you want them to clip anyway. You want to see a bit of detail but you’d let it go because it’s just a studio wall outside.”

Brawley agrees, “I fell in love with HDR. It is very hard to back to SDR grading if you’ve been looking at an HDR image. You get sucked in by the dynamic range but it’s the subtleties of the colour and extra transparency to the image that comes from more beautiful rendering of tones and midtones that gets you. It feels like there is so much more room to work in and you ‘re seeing more nuance in the image.”

One issue Staples had to keep his eye on was marrying Catherine/Fanning’s skin tones in an episode in which she develops a skin rash.

“This wasn’t a rash that appeared and stayed constant, it develops over the course of the episode, peaks and then fades and is part of the storytelling. The way the light hit her skin made the color particularly difficult to match so I made quite a lot of bezier shapes and intricate keying to pull out and adjust what was there.

“It’s a fine line because you will always get the note ‘I can’t see it’ – and very quickly you can then get it to look overdone or as if someone’s painted it on and so it can easily look like a mistake.”