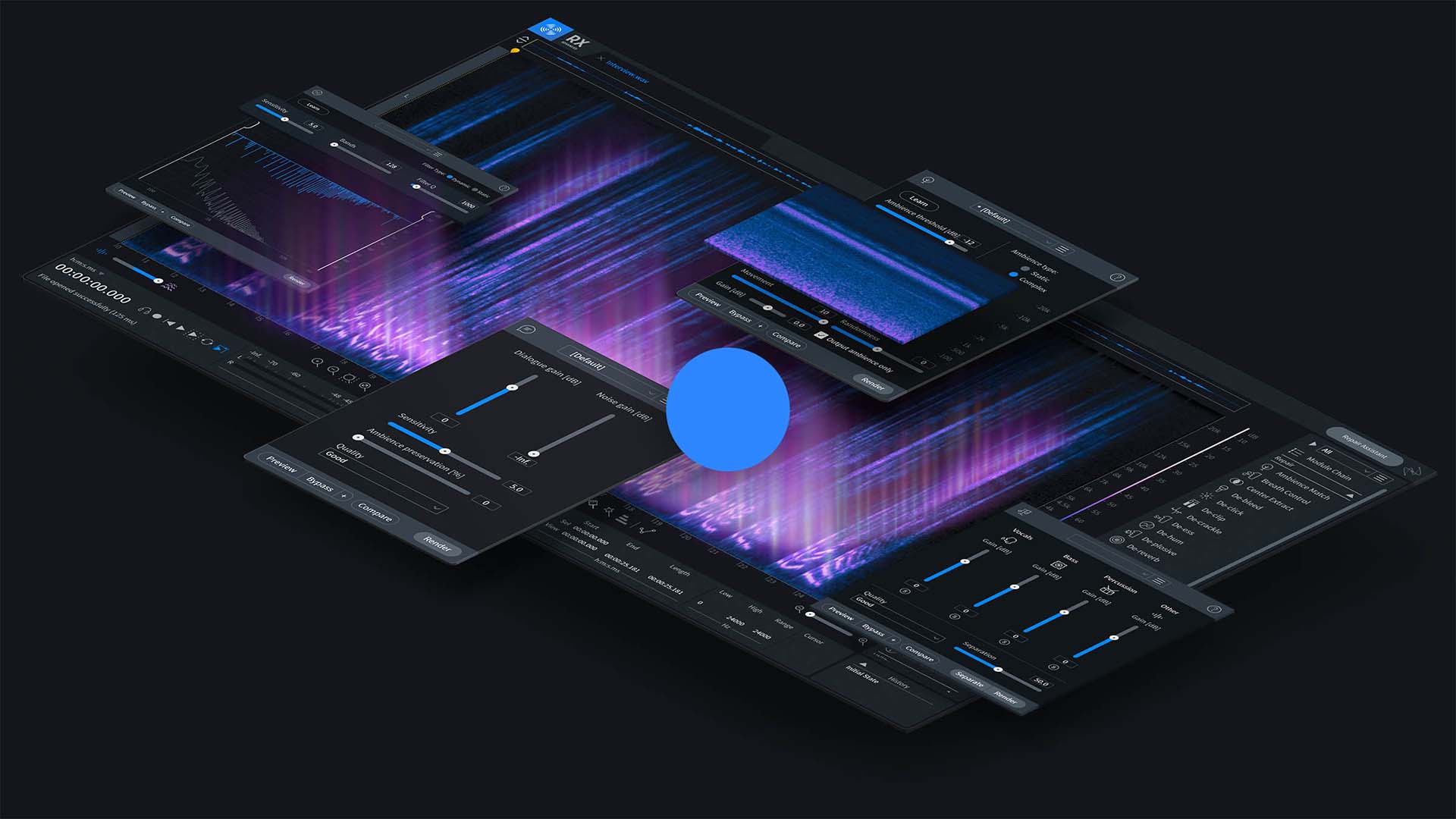 iZotope is back working its magic again. Erik Vlietinck reviews the latest version of its RX site, RX9.

Audio processing has fallen victim to the idea that AI is always going to be better than the human touch. Yet, many AI-based solutions spit out results that are worse than a human expert is capable of achieving. Some aspects of AI combine well with human expertise, though, especially in the audio processing field. Using machine learning algorithms in audio, video and photo processing applications is a good thing, mainly because they leave the editor in charge and increase efficiency. Since a good few versions back, iZotope has relied on machine learning excellence for their RX Audio Editor and the newest version takes it to the next level. I tested RX 9 Advanced to see if it lives up to its promise.

The RX Audio Editor started as an all-round audio editor many, many years ago. RX 2 was the first version I reviewed and it was awesome at fixing anything from music to dialogue, but while it was better than any of its competitors, it was extremely limited in what it could do compared to what RX 9 is capable of. With its latest two versions of RX, iZotope raised the bar to such levels that it was hard to imagine further improvements without falling for the full-scale AI trap. And yet, here is RX 9 and it’s still not full AI, keeping you firmly seated as the human expert whose ears are the final judge of the results. 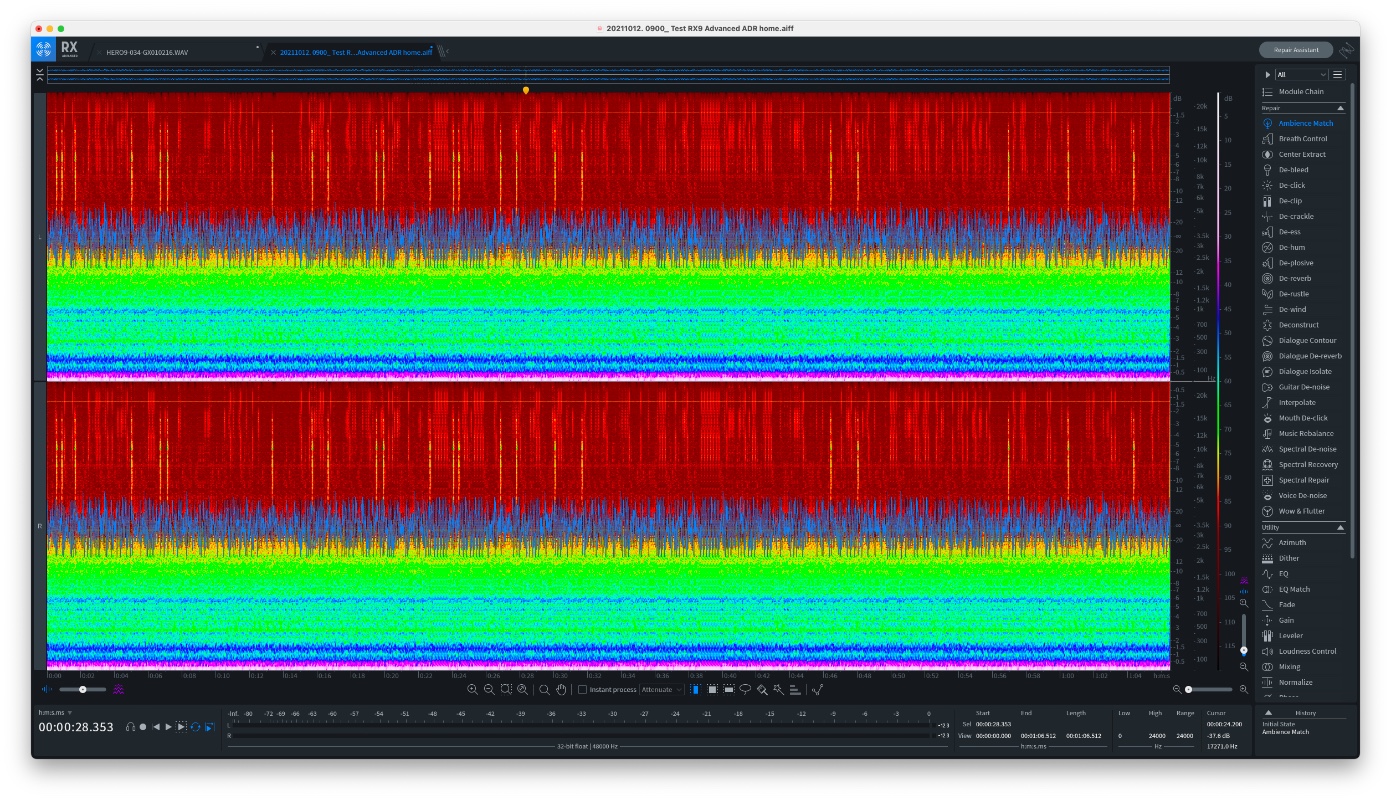 The latest version has been specifically designed for the demanding needs of post production professionals. The focus of RX 9 Advanced is on topics like dialogue isolation and ADR. Dialogue Isolate makes it easier to extract clean dialogue from its environment without artefacts, while the new Complex mode in Ambience Match seamlessly connects dialogue and ADR cuts with real background movement and textures — all with multichannel support up to Dolby Atmos 7.1.2. Both features aren’t new but after giving them a hard time in my test setup, I can safely say they are much, much better than what RX 8 was already capable of.

In both the Standard and Advanced versions, there’s also a new Dynamic Mode in De-hum which allows users to instantly remove any amount of hum and interference in one pass.

Furthermore, you can now undo 30 steps from the new expandable History list and use the new Restore feature to roll back an audio selection to any previous step in your History list. Finally, you can clean up unwanted sounds directly in Logic Pro X using the new Spectral Editor, built on the ARA plug-in extension so it won’t start up the RX 9 app.

Using iZotope machine learning, you can isolate dialogue from background noise with RX 9 much easier and with better and more natural sounding results than with anything else, including RX 8. My test involved me going out for a 45 minute walk, starting with the crossing of Europe’s busiest motorway and further along Antwerp’s main access road. I made three sound recordings along the way: one before I got on the viaduct, one while I was crossing it and one when I was at a randomly chosen pedestrian crossing in the city centre. If you’ve never come to the city of Antwerp, its traffic is comparable with that of Amsterdam. The motorway I crossed, though, is incomparable to any other place in Europe; it’s like hell for anything on wheels — preferably 16 or more of them — and its high levels of sound and air pollution go through the roof for up to a kilometre away. On the viaduct that runs across the motorway, I had to shout to hear myself talk and even then my voice was drowning in deafening levels of noise. 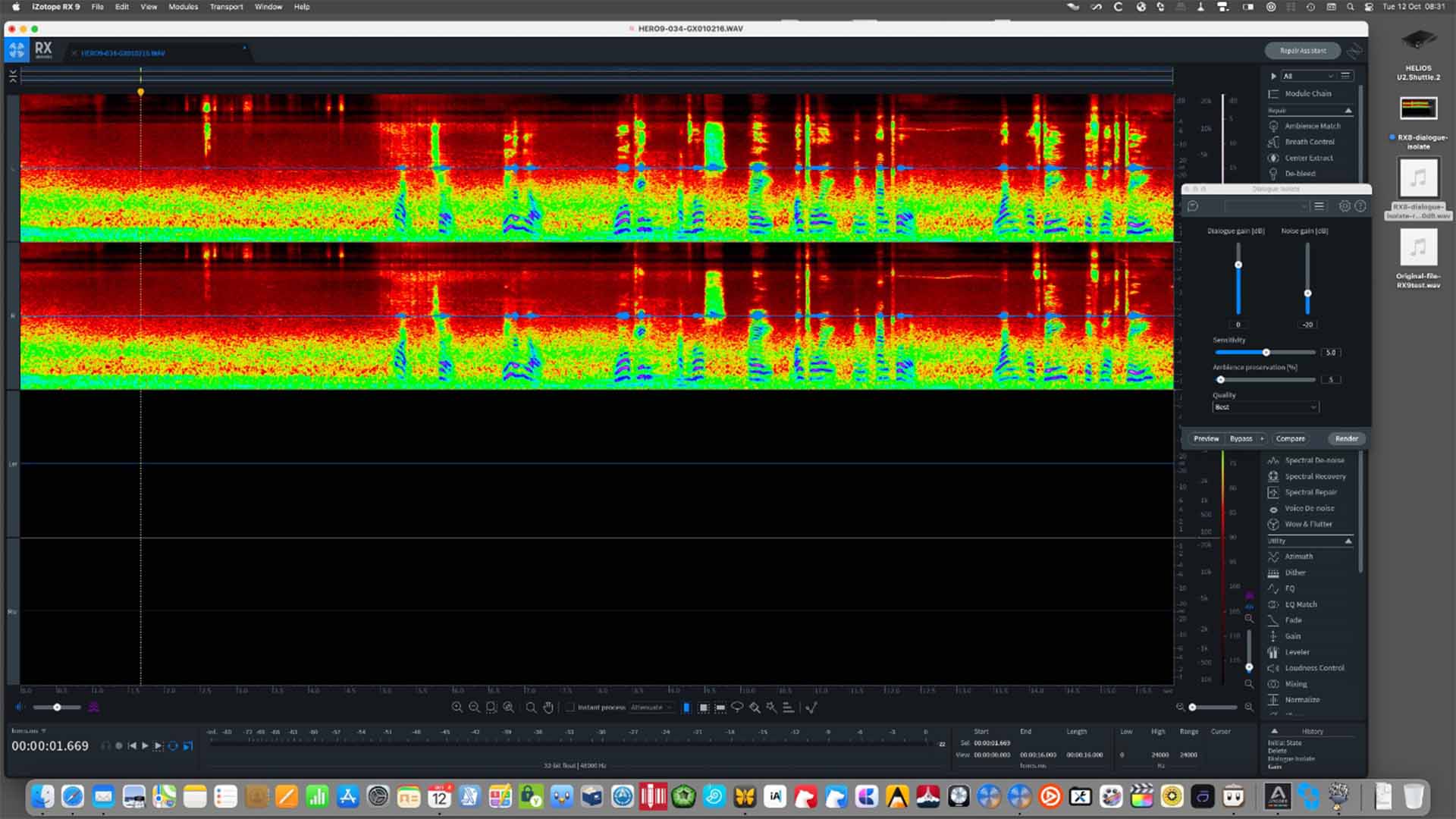 Back in the quiet of my editing room, I didn’t think it would be possible to isolate the nonsensical monologue I was shouting to myself on the viaduct from the background, but RX 9 succeeded in separating my words from the unbearable noise. As I still have a copy of RX 8, I could compare the results and it too succeeded but required more tweaking to get a natural result and when I set the noise gain for the result to -Inf, my voice sounded metallic. Admittedly, RX 9 took a bit more time, but it sounded a lot better from the start, even at the -Inf noise gain level.

You can listen to the original and the results here.

No tweaking was done on either of these files, except the gain of the result was increased by 10dB as the entire recording had to be done at very low levels in order not to end up with clipped recordings.

Another major improvement you will find in RX 9 Advanced is its new Complex Ambience Match. In RX 8, this module generated a static and therefore boringly uniform ambience file. The problem with uniformity in ambient noise is that it does not exist in the real world. The Complex algorithm in RX 9 is dynamic and, more importantly, you can decide how dynamic you make it. If you want to seamlessly connect dialogue and ADR cuts, you’ll love it, because it lets you set up rich textured ambience for your dialogue. Below are screenshots the original, an RX8 match and an RX9 complex match.

Other goodies in the bag

I have tried, honestly I have, to remove constant interference sounds from recordings with RX’s previous versions and in every case I gave up after a quarter of an hour fiddling with settings. In most cases, too much of the actual sound disappeared together with it. It was as if the module ate into the frequencies of the audio I wanted to save from obsolescence. From RX 9’s presentation, I was relieved to learn it wasn’t a lack of skill that prevented me to get a perfect result.

To address the problem iZotope came up with Dynamic De-hum. It’s a new mode that you can use to remove any amount of hum, wireless ring, or interference, without the artefacts or decrease in audio quality you will get when the interference is partly located in frequency bands of the audio you want to preserve. The secret lies in dramatically more frequency notches (1024 instead of 16) to decrease each specific frequency’s sound level. The best part of this is that it takes one pass only to eliminate any sort of audible interference, including that irritating mobile phone ticking right before the phone starts ringing.

RX 9 now also gets what photo editors have had for ages, which is a history feature that allows you to roll back an audio selection to any previous step in your History list. The History list can now be expanded as well, with up to 30 steps of undo history viewable for quick reference.

Finally, RX’s Spectral Editor can now be used to clean up unwanted sounds directly in Logic Pro X with the new ARA plug-in extension. It allows you to select noise and remove it without having to toggle between Logic and RX.