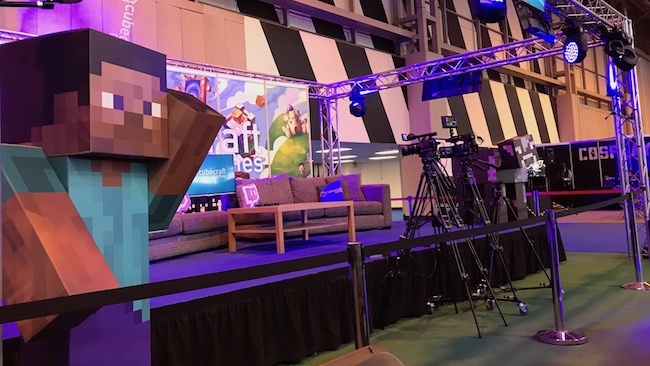 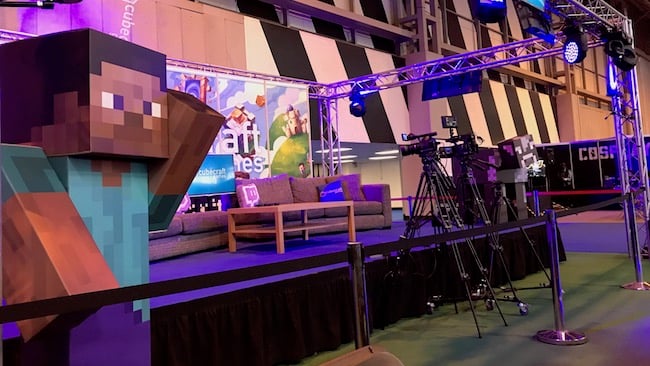 Newtek’s IP-Series production system was used by the UK’s Digital Tree Media when it was charged to run the Minecraft Zone at last year’s Insomnia 60.

For those that haven’t been paying attention, eSports are becoming seriously big business and Insomnia is the largest series of dedicated gaming festivals taking place in the UK. Minecraft, although six years old this year and thus positively ancient in gaming terms, remains one of the most popular platforms in the field, and so any self-respecting show needs a large Minecraft presence.

Insomnia 60 was no exception. The show’s Minecraft Zone saw a large networked stand at the massive Birmingham NEC setup with 48 computer workstations that were grouped across six teams.

The idea was that festival-goers could drop into the stand and play Minecraft with other players in a competitive, team-based environment, while esports commentators would provide running play-by-play and analysis. Influential YouTubers would also show up for meet-and-greets, and be hustled into the studio for on-camera interviews.

All this on-screen and on-camera activities then had to be mixed into a centralized program and streamed live; sending the programme to large displays throughout the stand and, via the Twitch social gaming video platform, to Digital Tree’s CubeCraft community. All in all that encompassed a 44-player video production, 4 PTZ camera sources, four backup gaming systems, and audio for the event that was due to last four days.

What’s more, the production had to work within the confines of the allotted stand area, ensure that tens of thousands of Insomnia attendees could flow between gaming areas and perimeter hallways, while walking among four dozen Windows desktops connected to a video switcher. And Digital Tree had to sort all this out in three and a half weeks.

Digital Tree decided to use the NewTek IP-Series production system partly because it meant that producers could access any enabled source located on the LAN without requiring a direct hardware input. Switching itself was centralized on the IP-Series’ two VMC1 Video Mix Engines. Using both Video Mix Engines, the entire show could be controlled by one operator per 45-minute segment. Digital Tree also added a VMC1 4S control surface, NewTek’s four-stripe control panel connected over-the-network as the operator interface, capable of mixing sources from both.

That was cabling sorted. Next came the not insignificant challenge of sorting out the network. The network had to host CubeCraft’s game traffic in addition to all of the NDI signals going over the same network, so at first Digital Tree considered using one or even two 10Gb connections for the IP Series.

However, since Newtek’s NDI protocol efficiently optimizes video bandwidth on standard Ethernet networks, in the end they managed to used two 1Gb connections to link into the IP Series, and one 1Gb connection for each of the desktop systems.

The last thing that had to be sorted out, and sorted out quite urgently, was a way to grab the full-screen output of the Minecraft desktops, showing each player’s POV during gameplay. This was achieved using the Open Broadcaster Software (OBS) utility, which is used in the gaming industry by thousands of players to capture their games for streaming. Its community members wrote a plugin for OBS to be able to send video game output over the network via NDI, making it available like any other source to the IP Series.

This was invaluable. “Because of the support of NDI within the development community, our potentially show-stopping hurdle took only 20 minutes to fix,” comments Digital Tree CEO, John Coles.

Despite having to be specced and implemented in a very short timeframe, the system earns nothing but praise from Coles. It was easy to setup; easy to use, simply booting up each morning with all IP nodes reconnecting; and the network never got saturated

“For our purposes, it was just a normal network that happened to have 44 live streams of video running on top of it,” he says.

Finally, he says that the use of a LAN instead of a traditional video infrastructure was the single biggest difference in terms of getting a large live production designed, set up, and running in an extremely short timeframe. This is precisely why more and more productions are considering IP.

“To take 48 PCs, convert them to SDI and run SDI connectors through traps in the floor and over to our control area, would have been completely ridiculous to do in terms of man hours and the sheer physical amount of cabling. Trying to keep track of all those cables. Making sure they're all labelled properly, and debugging why one cable doesn't work when the other 47 do. Whereas the software-driven IP Series is very flexible in that, if you want another input, you just select it from a dropdown. And it's done.”